Stepping into the ring at Madison Square Garden earlier this month, Tammy Lynn Sytch made what she calls “the Sunny switch.” 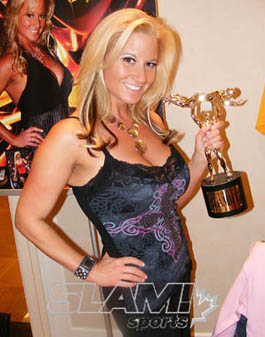 Sunny and her Slammy Award at the Legends of the Ring convention in October 2010, in Monroe, NJ. Photo by Michael Coons.

“It’s weird, it’s like I turn on a switch and become somebody else,” Sytch recently told SLAM! Wrestling from her home in New Jersey. Hot on the heels of her return to Madison Square Garden — refereeing a 6-Diva tag team match that included The Bellas, Gail Kim, and Eve Torres — Sunny will be inducted into the WWE Hall of Fame this weekend in Atlanta.

It was late one evening back in January when Sytch received the call from WWE Executive Vice-President of Talent Relations, John Laurinaitis, telling her to turn on RAW. “I already had it on while I was packing for my trip to Mexico, when all of a sudden the announcement of Shawn Michaels going into the hall of fame comes on,” recalled Sytch. “I said to Johnny Ace, ‘That’s great! Good for him, he deserves it,’ as I acted happier than a pig in poop.

“Then Johnny Ace goes, ‘Well, Vince [McMahon] and I were talking and we’d like you to be the second inductee.’ I paused, and then said, ‘You’re s**ttin’ me right?’ Then he says, ‘No, I’m not s**ttin’ you.’ So of course I started crying and shaking and freaking out. I was thinking to myself, ‘Oh my God, I’m only 38, and usually the people who go into the Hall of Fame are at least 50, or dead by the time they get inducted. All I could think was, ‘Holy crap, this is awesome!'”

It was also Johnny Ace who called Sytch earlier this month, inviting her to work Madison Square Garden on short notice. “I was at the gym when my phone rang, and the number said Stamford, Connecticut,” said Sytch. “And the only people that ever call from Stamford are the WWE. So I picked up the call and Johnny Ace said, ‘Hey, do you want to work the Garden on Saturday night, refereeing the girls’ match?’ I said, ‘Do I want to work the Garden? What kind of question is that? Of course — fantastic!'”

“So I looked at myself and thought, ‘Ok, I’ve got three days to get ready. I’m pale as a ghost and half of my hair extensions have fallen out. So on Friday, I went shopping for ref’s clothes, got my hair done, and got a spray tan. It was crazy! 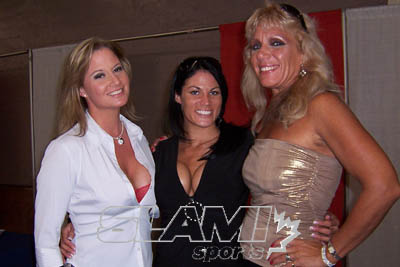 “On Saturday, a stretch limo arrived at my house to pick me up and bring me into the city. When I got there, I had so much anxious energy that I was bouncing off the walls. Just before the match, I’m at the curtain when all the girls go out to the ring, and Stephanie McMahon comes over and said, ‘Why are you so nervous? This is old hat for you.’ And I said, ‘Yeah, but it’s been like 13 years since I worked this building.’ Well, as soon as my music hit I made the Sunny switch, and every little bit of nervousness left my body, and I went out there and did my thing.

“It all felt like I never left, and it was just so freakin’ cool!”

Often hailed as “the first Diva in WWE history,” Sytch’s popularity soared in 1996 when her bikini issue of RAW Magazine sold in record-breaking quantities, while winning two Slammy Awards (including Best Buns). That same year, Sunny was deemed the most downloaded woman in the world by America Online.

In the years to come, Sunny would manage both the Smokin’ Gunns and the Godwinns to the WWE World Tag Team Championships, garnering her reputation as not only a loathed villain, but one of the hottest personalities in WWE.

Regardless, Sytch was unsure of how the fans would respond when she recently walked through the curtain at Madison Square Garden, after all these years. “I was worried that all the kids in the crowd wouldn’t know who I am, as I was already gone (from WWE) by the time they were born,” said Sytch. “But I was thrilled to see it was an old school crowd, with a mix of kids of all ages who were chanting my name and reaching over the railing wanting to slap my hand. And that was really cool. You could see a whole new crop of young fans out there, going nuts like they did back in 1997. It was really nice, and it took me back.”

It was back in 1995 when Sytch first signed with the WWE, working initially as a broadcast correspondent, before taking on the role of manager to real-life boyfriend Chris Candido. Known as the Bodydonnas, they became Sunny and Skip, who later teamed with brother Zip (Tom Pritchard) to win the WWE World Tag Team Championship at WrestleMania XII.

Her last stint in the WWE came in 1998 when she accompanied the Legion of Doom to the ring, an experience she considers one of the greatest thrills of her career. “When I was first told that I’d be working with the Road Warriors, I thought, ‘No way! This is the greatest tag team of all time,'” said Sytch. “When it came time to make my costume, which had to tie in with theirs, I couldn’t believe how tiny it was, as it was just molded leather and chains — and the most uncomfortable thing I’ve ever worn. But I have to say, it looked damn good!

“And Joe (Animal) and Mike (Hawk) were fantastic guys,” she added. “Joe to this day is one of my best friends, and he’s been like a big brother to me. And I tell ya, the first time I walked down to the ring with them, and their music hits — what a rush! It truly is a rush working with the Road Warriors. You get a chill over your entire body, and it’s like one of the coolest things I’ve ever done in my life.” 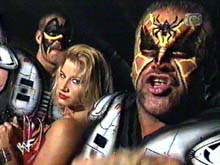 Sunny is flanked by Hawk and Animal in Legion of Doom 2000.

Sytch said she was thrilled to hear that the Road Warriors, along with Paul Ellering, will be part of the WWE Hall of Fame’s Class of 2011. “How cool is that to be in the same class as one of my tag teams?” said Sytch with obvious pride. “When they told me that, I was just so happy. This is a really cool class for me to be in.”

Along with old friends like Road Warrior Animal and Shawn Michaels, Sytch said she is looking forward to reconnecting with fellow WWE Hall of Fame inductee Abdullah the Butcher. “I love Abby!” said Sytch. “The very first show I ever worked, I was 17 and just out of high school, and Abby was on the show. It was a stacked house in Philadelphia at the Civic Centre. Abby was hanging out in the back talking to Nancy Benoit, and when I met him, he was such sweet, nice man.

“Though he’s never been in a WWE ring, I do believe he deserves to be inducted into the WWE Hall of Fame. Because think about it, he’s the hardcore original along with The Sheik, who were doing hardcore, crazy stuff way before anybody else. And anybody who has gone the hardcore way, like Sabu or Axl Rotten or Balls Mahoney, knows that Abby was the originator. Abby has my utmost respect. I’ve always loved the man. I’ve always been very respectful to my elders, and I think he could sense that right away.”

Love and respect are exactly what Sytch now gets from present-day wrestlers and Divas alike. “When I go back now, everybody’s really cool and gives me the same respect that I gave my elders when I came in,” said Sytch. “When I recently spent time with Eve Torres before that match at the Garden, I was going over the match with her in the locker room, and it was obvious that this girl has really learned her craft. I was shocked to hear her using terminology like a man would, and am really impressed with how she has applied herself over the last couple of years. All the girls there are just fantastic.

“I’ve always gotten along with everyone, for the most part,” Sytch added. “I was raised a tomboy, so I’ve always related better with guys than girls, and I think all the guys could sense that. They knew they didn’t have to hide things around me, or watch their language, because they knew that I was just one of the guys.”

Sytch was also a good sport, especially when it came to being doused in pig slop during one of her most memorable angles with the Godwinns, immortalized on the Coliseum Home Video simply titled Sunny. “Oh yes, I have that video here in my home,” Sytch said with a chuckle. “I’ve always said it’s so much fun being a heel. During that angle with the Godwinns, those fans wanted to see that slopping so bad that the place just erupted. People would say, ‘Oh my God, that’s so disgusting, how can you do that?’ and I would say, ‘Getting slopped was one of the most fun things I ever did.’ We got so much publicity from that, so I got slopped every night on the road for about three months. I had a blast!”

Sytch anticipates WrestleMania weekend will be a blast, and that she’ll be filled with emotion when she steps up onstage to take her place in the WWE Hall of Fame Class of 2011. “I already know that I’m going to totally screw up my speech,” Sytch said with a laugh. “That’s 100 percent a given. As Sunny, if you give me a microphone and tell me to go out to the ring and cut a promo, no problem. But I’ve got to get up there and speak from the heart. It’s going to be 100 per cent real — not a work, not a gimmick, not an angle.

“And that’s how I know I won’t be able to keep it together,” she concluded, her voice full of emotion. “Because that’s not going to be Sunny up on that stage talking. It’s going to be Tammy talking. You know how I told you about that Sunny switch? Well, Tammy screws up a lot. Sunny never does. So without the Sunny switch turned on, I’m going to lose it and cry. Wish me luck.”