With WrestleMania upon us, former WWE referee Mike Posey talks exclusively to SLAM! Wrestling about what dynamics a referee can add to a contest, stressing that they are not just there to count that illustrious pinfall.

“We’re a part of the show too. The referee can add so much drama and can make a four star match a five star classic, with close pinfalls adding more emphasis to the contest. 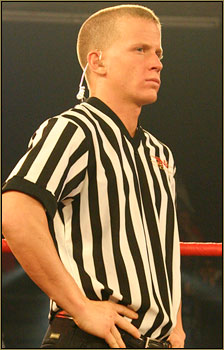 “I always liked to know the booking plans for the match before I went out there, I liked to know the main spots that were happening. If I know what’s coming I can get in position and I can help the guys if they get lost.”

In short, referees are one of the most key elements in any match, though for the most part, they are expected to be barely noticeable, remaining inconspicuous in the background.

Nowadays though it seems these valuable assets have been stripped of their identities and their credibility as World Wrestling Entertainment no longer refer to their officials by name, even though the likes of Charles Robinson, Scott Armstrong and Mike Chioda are well known by many fans.

Posey, who was released from WWE in January 2009, was also a member of the company’s ring crew. Setting up the ring at live events, laying out chairs, putting barricades out and for WrestleMania they would also setup a ring in a nearby hotel for talent to practice in.

“It’s just adrenaline pumping all day,” Posey recalls. “I wouldn’t say there’s pressure before the event, it’s more excitement and wanting to feel the energy of the crowd. I think at my first WrestleMania [23] I really didn’t make the most of it, I was too focused to enjoy it. At WrestleMania 24 I told myself I was going to have more fun and I did.

“With the ring crew, however my schedule was completely different; we would get to the arena that was holding WrestleMania on a Wednesday or a Thursday before the Sunday. This is earlier than a normal live event as for example at a RAW or Smackdown we would get to the arena at 10 a.m. and a live house show event we wouldn’t get there until at least 1 p.m. on the day of the show.

“For an event the size of WrestleMania, there is always so much to do.

“With the ring crew and other personnel being there a couple of days early, everything is mostly done and everyone is pretty chilled out on the day of the event. Everybody’s running more on adrenaline than they are stressed or nervous. WrestleMania truly is WWE’s big day out.”

While never associated with the creative side of the plans for WrestleMania, Posey understands that for the months and weeks leading up to the event, WrestleMania is all Vince McMahon and his close inner circle think about.

“They work and think about WrestleMania 24/7, Posey said. “They always have that in the back of their mind. If Vince could work more than 24 hours a day he definitely would especially for WrestleMania.

“I think everyone is more focused come WrestleMania, nobody wants to screw up and everyone has their game face on even though most are very nervous in the run-up to the show.

“Vince and his inner circle are always on top of everything, WrestleMania is a huge show and while he is always focused I think with the added elements of the event and how big it is he is even more focused and determined to make it special.”

It was at WrestleMania 24 in 2008 which emanated from the Citrus Bowl in Orlando, Florida that Posey witnessed in person what he describes as his favourite WrestleMania match.

“Ric Flair vs. Shawn Michaels at WrestleMania 24 was a really good match, It was truly an honour to witness that match live.

“I watched it at the Gorilla position with everyone else and we were all in awe. We were all watching history being made before our eyes. Everyone was in awe of how well the story in the ring was told, that match went so well and the drama of that contest was just perfect.

“It was one of the best matches at any WrestleMania.”