An oily stripper, who prances and dances around in just a thong and dickey bow tie, not exactly the image of a man who was a member of the writing team for World Wrestling Entertainment programming over the last five years, but that’s exactly what Chris De Joseph — perhaps better known for his on screen persona Big Dick Johnson — did for WWE until his release in November 2010. 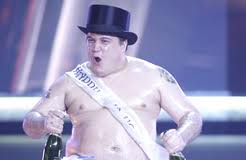 While wrestling fans all over the world are currently excited by WrestleMania season, for De Joseph this period is an odd time, as while instead of being involved with plans for this year’s extravaganza he will instead be watching from the sidelines and reminiscing.

With WrestleMania almost upon us, De Joseph shares his experiences in an exclusive interview with SLAM! Wrestling of what it was like working in the weeks, months and days leading up to mega event affectionately known as “The Granddaddy of them all.”

“Plans of what will happen at WrestleMania next year usually start straight after the WrestleMania that’s just happened. You then start to head towards that provisional plan that has been laid out. In WWE a year is seen as being from one WrestleMania to the next, and you can bet that on April 4th, Vince [McMahon] will start thinking towards Miami and WrestleMania 28 next year.”

De Joseph is quick to stress that while the focus each month is placed on the next pay-per-view in hand, WrestleMania is always at the back of everyone’s mind. He also points out that plans are subject to change and can do so at the drop of a hat.

“Millions of things can happen that can change the course of the plan over the year, something doesn’t get over, a character wasn’t going to do as well as was thought or even an injury occurs. For example the WrestleMania 23 plan had to change because Triple H got injured.

“There are WrestleMania meetings that are held periodically in the months before and these get held more frequently as the months go on.

“Vince and all the team, from the writers to Kevin Dunn’s production crew, are all extremely focused; it’s the culmination of the year. It’s what the whole year has been about. It means so much to the entire company and their success. There are so many people involved who are extremely focused in making the event bigger and better every year.”

Working for WWE was an absolute dream come true for De Joseph, whose first experience of attending a WrestleMania event live came back in 1993 at WrestleMania IX which emanated from Caesars Palace in Las Vegas, Nevada. While he enjoyed his time in the company and has no regrets about it, he was glad to be leaving the busy job of a WWE writer.

“Being a member of the writing team, while it was a lot of fun, boy it was completely hectic. You would be on the road a lot, travelling to the different places, you would have to go to the office to attend creative meetings and then travel again it really was a road that never ends. You could spend 9 a.m. to midnight working until everything was done.

“I think they released me because they wanted to go in a little bit of a different direction; they were looking toward more Hollywood writers. I loved working for WWE. I wouldn’t change a thing, but for now I wouldn’t go back and it felt good to leave, there’s no more pressure.

“Vince is a perfectionist 100% of the time, not just for WrestleMania, he is always focused and dedicated to the cause. He was a very challenging man to work for because of that perfectionist mentality, which as an owner of a company wasn’t a bad trait to have at all. WrestleMania, he probably puts a little more of his energy into because it is the Super Bowl of wrestling, the World Cup of wrestling, whatever you want to call it, it’s a huge deal.”

One of the best things about being a writer for WWE, De Joseph said, was seeing storylines, angles and matches that he had a creative hand in play out in front of a live crowd. In fact De Joseph was had a hand in one of the greatest WrestleMania matches of all time, Shawn Michaels against The Undertaker at WrestleMania 25 in Houston, Texas.

“Creatively there is nothing that makes you feel prouder than watching a storyline that you have been creatively involved in, grow and play out in front of a live crowd. Sometimes there can be a bit of despair if it doesn’t come off right, but there is complete elation when it comes off well — especially at WrestleMania in front of 70,000 odd people.

“At WrestleMania alone, I had a hand creatively in such matches like Candice Michelle and Torrie Wilson at WrestleMania 22, Matt Hardy vs. Jeff Hardy at WrestleMania 25 and I also remember coming up with the Shawn Michaels/Undertaker WrestleMania 25 angle, with Michaels being portrayed in the light and Taker in dark, with Dave Kapoor (Ranjin Singh, The Great Khali’s manager). I helped Michaels construct the promo that he did when he was dressed in all white. 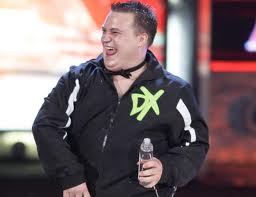 “Kapoor and I were driving one time and he happened to be in charge of the Undertaker/Shawn storyline that year,” De Joseph recalled. “He was trying to come up with an idea for it and we kind of started spouting off this religious promo. Needless to say as soon as we could, we sent it to Shawn [Michaels] and he made it his own.

“Watching that story play out was one of the coolest things I ever saw, I actually went out to the crowd to watch that match live; it was absolutely incredible, the best WrestleMania match of all time bar none.”

When asked if he will be watching this year’s edition of WrestleMania, De Joseph is undecided about whether to watch, but when asked about the card, there is one match confirmed for the event that is catching his eye.

“The one match that I find most interesting is Jerry Lawler vs. Michael Cole. I think it’s great that the King is finally getting to have a match at Mania, and Cole is a good friend of mine.

“If I were to watch WrestleMania it would be because I’m a big time Coleminer, but maybe even that isn’t enough to get me to shell out 65 bucks — after all, I’m unemployed.”