The art of the WrestleMania promo spot explained

Total Nonstop Action Wrestling’s Director of Production David Sahadi knows all about the planning that takes place in the months, weeks and days leading up to a WrestleMania event. Sahadi was employed with World Wrestling Entertainment from 1992 until 2003, when he left the company citing that he was burned out. “I had reached a point in my life where this world of pretense and superficiality lost its appeal. My soul needed to embark on a journey of discovery. My spirit longed for adventure. I was determined to find the true joy of life.” 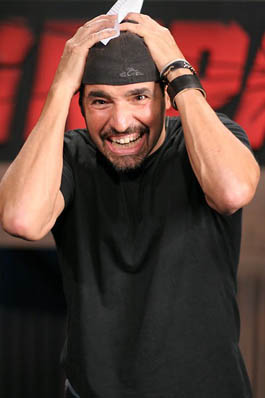 During his time in WWE, Sahadi created no less than 11 opening promotional videos for each WrestleMania event. In fact when he joined the company in October 1992, focus was already being put on WrestleMania IX, which would emanate from Caesar’s Palace in Las Vegas, Nevada.

With WrestleMania 27 quickly approaching from the Georgia Dome in Atlanta on April 3rd, Sahadi shared some of his memories in an exclusive interview with SLAM! Wrestling.

“It was a big deal doing promotional videos for WrestleMania IX, because it was my first,” Sahadi recalled. “I produced the promotional spots that featured the return of Hulk Hogan, as well as the opening 3D computer animation for that event.

“Since I was a post-production guy, I rarely attended a WrestleMania event. Except for the times I did promotional pieces with Pamela Anderson, Leslie Nielsen, Nicholas Turturro, Lawrence Taylor and Mike Tyson.

“I was there for those since I worked with them in the spots leading up to WrestleMania and it was my job to produce them the day of the event.”

While he was with the company, Sahadi recognized how the WWE wanted WrestleMania to grow year by year, understanding how much emphasis was placed on the event.

“Each year I was with WWE, WrestleMania just grew in scope and scale. Vince [McMahon] completely makes WrestleMania his and the company’s total focus, it’s priority number one.

“They really kick into high gear around January time, with the build up to the Royal Rumble. Vince McMahon and his creative team begin thinking about the next WrestleMania the day after they do that year’s WrestleMania event.

“They plan angles and mega-matches way in advance and slowly build to them throughout the year; it’s a brilliant strategy.”

Sahadi worked as WWE’s Creative Director of On-air Promotions, overseeing many of the PPV opening videos which have become so iconic to many professional wrestling fans.

While working for WWE his responsibility was to write, direct and produce the promotional spots and commercials for events throughout the year, with WrestleMania the event he had to give most of his focus to.

“Promotional teasers were normally produced six months in advance, they were quite vague. Obviously, as we got closer, the pieces became longer, more detailed and took on a significantly greater emotion.

“Vince is a perfectionist, but he’s also very visceral. As am I. Vince acts on intuition, his gut instinct. He feels things.”

As the 1990s moved on, WWE started to become more creative in regards to producing their opening PPV videos. Sahadi’s job was to introduce a more creative edge to the videos; he introduced some unconventional aspects that wrestling openings had not seen before.

Sahadi, whose father, Lou Sahadi, was the editor of Wrestling World magazine, wanted to develop his creativity and the opening promo videos gave him that chance, allowing him to use a lot of creative freedom in the videos he created.

“Vince taught me a very important lesson my first day on the job. He said, ‘What we do here is all about one thing: emotion.’ I’ll never forget that.

“He was talking about the wrestling business in general. I applied that theory to whatever I produced. Whether a promo or an opening makes one laugh, or think, or feel, that’s what I try to do. I strive to evoke emotion out of the viewer. 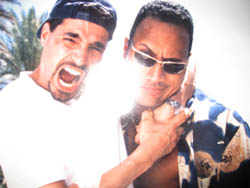 The Rock taught Sahadi to know his role in WWE, which Velvet Sky later took advantage of in TNA. 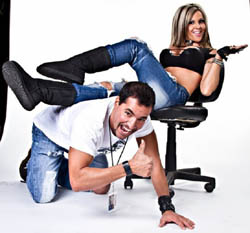 “Playing my videos for Vince, the very first time without him being aware of what the spots were and then getting a positive reaction from him was one of the greatest rewards while working there. It was very fulfilling to please the Ultimate Boss.”

Looking back on the videos that he produced for WrestleMania down the years, Sahadi believes one of his favourites and the promo that is probably most remembered in his WWE career, is the opening for WrestleMania XV. The video featured legends such as “Classy” Freddie Blassie, Killer Kowalski and Gorilla Monsoon talking about their careers.

“The vision came to me late one night after a conversation with my dear friend, the late Freddie Blassie. I put the shoot together and gathered the talent without ever letting Vince know what I was doing. The day of the shoot, I got a call saying Vince was livid that I was shooting a spot with old-timers in this era of attitude and new, younger superstars.

“He didn’t believe the concept fit the new image of attitude the WWF was promoting at the time. A week later, when Vince saw the finished spot for the first time, he broke down and cried. It touched him that deeply.

“His reaction also touched me. It didn’t matter what anyone else might think of that spot. The simple fact that I touched Vince emotionally meant the world to me. 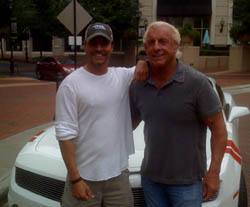 Sahadi styles and profiles with “The Nature Boy” Ric Flair.

Sahadi took McMahon’s words about emotion to heart; with his inspirations for PPV openings come from all sorts of places and experiences.

“Sometimes I will be inspired by an image I see on TV, a line I hear in a song or some random thought that pops in my head while I’m hiking or driving.

“Most directors do storyboards. Mine are in my head. I’m a very visceral person; I need to feel it. When I write a spot, I have visuals in my head. I’m very good at visualization.

“I need to walk around the location. That’s when I get inspiration for certain shots that I might not have initially boarded. Photos of a location aren’t enough for me. I have to be standing there, walking the location, open to whatever is calling, whatever images are begging to come out.

“I always wanted my WrestleMania openings to feel epic, larger than life, as if no other event, not even the Super Bowl compared.”