What a rush it must have been when Joe Laurinaitis (better known as Road Warrior Animal) heard that the Legion of Doom would be inducted into the WWE Hall of Fame.

“I’ve always envisioned it, and year after year I thought we were going in,” Laurinaitis told SLAM! Wrestling from his home in Edina, Minnesota. “I’ve always said that I would love to be inducted, then a while back a couple good friends of mine who are writers said, ‘We heard the news that you’re going into the Hall of Fame!’ And I said, ‘Well, I wish I knew, ’cause I hadn’t heard anything.’ Most of the time, the wrestlers are the last ones to find out these kind of things.” 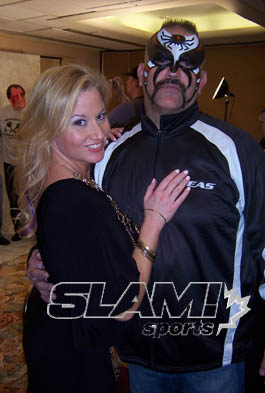 In addition to his upcoming Hall of Fame induction, Laurinaitis’ new memoir, The Road Warriors: Danger, Death, and the Rush of Wrestling, was released earlier this month. “Yeah man, this is quite a year for the Road Warriors,” said Laurinaitis. “I just did a book signing at Barnes & Noble, and over 250 people showed up. It was phenomenal. When I got introduced, I got up there and told the fans how much I appreciate them being there, because without the wrestling fans there would be no wrestling business. I think sometimes that’s overlooked.”

Dominating professional wrestling for two decades, the Legion of Doom — Hawk, Animal, and their manager “Precious” Paul Ellering — immortalized themselves as the only team to ever hold all three major titles (AWA, NWA, and WWE). Storming onto the wrestling scene in the summer of ’83, with their monstrous physiques and unique style, the Road Warriors changed the landscape of professional wrestling, selling out arenas and packing stadiums in virtually every major territory.

“In researching for my book, I watched a lot of those old matches, and at the time you don’t realize the magnitude of what you’re doing,” said Laurinaitis. “When you’re in the ring, you’re working and you’ve got a job to do — and I was thinking about how there’s 15 minutes of stuff to remember. That’s how I looked at it, ’cause when I’m in the ring, I’ve got tunnel vision.

“Then, years later, you see a match where we’re driving to the ring on motorcycles in Wembley Stadium in front of 80,000 people, and the people are all on their feet cheering for us. Or I watch a match that took place in the Tokyo Dome in front of 63,000 with [Hulk] Hogan and [Genichiro] Tenryu against us, and the people are going crazy. That kind of stuff brings back memories and makes me say, ‘Wow, in that match, we were four of the biggest names in Japan at that time.’”

Laurinaitus paused for a moment, then added: “The Road Warriors’ fans are unbelievable, and they are some of the most dedicated and die-hard wrestling fans there are. But I can honestly say, until I started watching some of these matches, and with the passage of time, you don’t truly realize the impact you had on people.”

The Legion of Doom would also earn the respect of their peers, as Laurinaitis, Michael Hegstrand (Hawk) and Paul Ellering will also be inducted this year into the tag team category of the prestigious Professional Wrestling Hall of Fame in Amsterdam, New York. 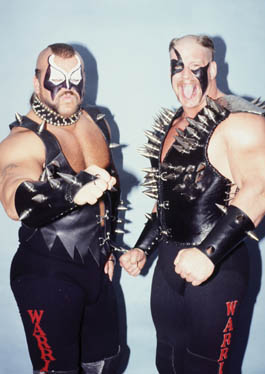 The Road Warriors – Animal and Hawk.

“What an honour that is!” Laurinaitis said with obvious pride. “Because that hall of fame is voted on by your peers. It’s not voted on for ratings or anything else — there’s no TV. It’s voted on by people like Harley Race, Ted DiBiase, Terry and Dory Funk. These were guys who either wrestled before you, or whom you wrestled with — your peers select you. Along with us they’ve got Ivan Koloff, Jerry Lawler, and The Sheik — all the classics are goin’ in this year. And that’s why I can’t wait to go to New York in May.”

Indeed, 2011 is the year that the Legion of Doom’s legacy will be etched in stone. In his book, Laurinaitis reflects: “Well, simply put, when I think back over the 20 years that Hawk and I were together, I’m proud of what we accomplished. When we came in, we were just big, tough kids with attitudes, but people recognized the raw talent we had. People like Eddie Sharkey, Ole Anderson, and Giant Baba gave us golden opportunities which we ran with all the way to the bank, with the guidance of Paul Ellering.

“When Mike and I were coming up, no one was given that kind of push with so little time in the ring. We were absolutely blessed to have been given the seeds of an amazing gimmick that would take us around the world ten times over.”

As for his upcoming hall of fame speeches, Laurinaitus said he has yet to write them. “Like I said at my recent book signing here in Minnesota, more than anything, I want to thank the fans,” Laurinaitis concludes. “I just want to say, hey man, hope I gave you some good entertainment.”

You certainly did, Animal. Ohhhhhhhhh … What a rush!