Why everyone’s talking about Michael Cole vs. Jerry Lawler

Two World Championship matches, a mixed six-man tag contest featuring a celebrity from MTV’s hit TV show Jersey Shore and a No Holds Barred meeting with The Streak on the line. It is a stacked WrestleMania lineup that is sure to draw a good buyrate. However, when scanning the card there is one encounter which no one thought they would ever see and it is certainly one that a lot of people are talking about.

The Michael Cole vs. Jerry Lawler contest is one that has got a lot of people intrigued heading into WrestleMania 27. 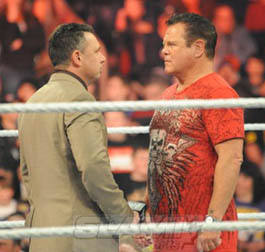 Will this match be the best encounter on the card? No, absolutely not. Nobody is expecting Cole, who has never wrestled a professional match before and the 61-year-old Lawler to have a five-star classic. But with “Stone Cold” Steve Austin, Jack Swagger and possibly Jim Ross and John Bradshaw Layfield’s involvement included, this contest could very well be the hidden gem of of the “Showcase of the Immortals” in Atlanta.

Former WWE referee Jim Korderas is one looking forward to it. “Here’s a guy who was the number one guy in his territory for so many years, came to the WWF at the time, more in a commentator role. He did some wrestling, but that wasn’t his primary duty in the WWE,” he said. “And now, he’s in one of the most high-profile programs in WrestleMania this year. At 61-years-old, he still has the crowd eating out of the palm of his hand. He knows how to get himself, and not only himself, he’s getting the whole angle over.”

This feud has been built better than anyone expected, even if it it is a similar match to the Bret Hart vs. Vince McMahon contest last year. It is being said that this is the storyline that Vince McMahon himself is currently enjoying the most, and contributing to.

There is little doubt that Cole is getting heat, hotter than one of JR’s two-dollar steaks. No one can argue that Cole hasn’t been given a fair chance since taking over the reins on WWE’s flagship show Monday Night Raw, which is what makes Cole’s character, this feud, and its storyline that much more intriguing.

Fans are begging for Lawler to extract his revenge on that “rat bastard” Cole; they have an emotional attachment to this story as most fans are still adamant, like Lawler must be, that it should still be JR sitting at ringside next to The King instead of Cole.

“Cole is too good to have saddled to the announcing chair, especially when his character is all over the place, sometimes rooting for babyfaces and justices and then indiscriminately rooting for the opposite,” wrote Wade Keller in a Pro Wrestling Torch column.

Since joining WWE, Cole played the role of understudy to then lead play-by-play announcer; he seemed a natural choice to take over from the Oklahoman Ross when the time was right.

That time came in 2009, when Ross was unceremoniously shoved out of the door after being unexpectedly drafted to Smackdown the year prior. McMahon had decided it was Cole’s time and had him replace the WWE Hall of Famer, permanently on WWE’s flagship show, whether the fans liked it or not.

Of course, the ticket buying public didn’t like it. Fans clamored for good ol’ JR and the harder Cole tried to be accepted by the WWE fans, the more he was despised. Fans just weren’t ready to let go of Ross, which is a testament to how good Ross was rather than how bad Cole is.

In 2010, plans seemed in place to try and get Cole over as an obnoxious antagonist play-by-play announcer. It was with his constant praise of The Miz that Cole cultivated his heat. Cole’s infatuation for The Miz eventually saw him cross paths with his own broadcast colleague, long-time WWE employee and Hall of Famer Jerry “The King” Lawler. Lawler is a pro wrestling legend and a well-traveled veteran who is well received by the WWE fan base much like his friend Ross.

Despite being in the company since 1993, Lawler had hardly been a top of the card wrestler. Yet on the November 29, 2010 episode of Raw, The King was granted a WWE Championship match in a Table, Ladders and Chairs contest against the The Miz. Lawler came within an eyelash of capturing the title before outside interference from Alex Riley and eventually Cole cost him the Championship.

Lawler won the right to face The Miz for the Championship again at Elimination Chamber after being victorious in a seven-man Royal Rumble match on Raw. The night after Lawler challenged Cole to a WrestleMania match on the February 21, 2011 edition of Monday Night Raw at the Save Mart arena in Fresno, California. Cole responded by chucking a glass of water in the Hall of Famer’s face and running away.

While Cole never answered the challenge that night he did accept it on Raw the next week. His decision would mark the first time that Lawler (and, of course, Cole) would compete at a WrestleMania event. Cole also announced that Jack Swagger would be his trainer for the contest and that there would be a special guest referee.

Cole, hoped to announce John Bradshaw Layfield the guest referee on March 7th edition of Raw, however these plans were thwarted when Steve Austin instead signed the contract thus making him the special guest referee for the contest.

With these added elements in the mix the Lawler vs. Cole clash could have the potential to be a WrestleMania highlight. So while all the talk may be about the championships, celebrity involvement and The Streak, it’s amazing to think that potentially this encounter could have more people talking about it than some of the main attraction bouts that are scheduled.

Former WCW announcer Mark Madden, in a column at WrestleZone, credits The King for the success of the angle, given his years of experience.

“Lawler is doing his opportunity justice. He comes across as a guy who used to be great trying to remember how to be great, and coming just close enough to make us believe. He’s not convinced, but he’s hopeful, and his hatred for Michael Cole’s arrogance, disrespect and malfeasance fuels him. It’s like the final Rocky movie, only better,” Madden wrote. “That’s not how WWE booked it. Their creative team isn’t that bright. Lawler just knows what to do. Always has.”