James Yun is one of the most successful Asian-American wrestlers ever to grace the business of professional wrestling.

He is probably most recognized for his last stint in World Wrestling Entertainment as Jimmy Wang Yang portraying an “Asian Redneck” gimmick from May 2006 until his departure on April 22, 2010. 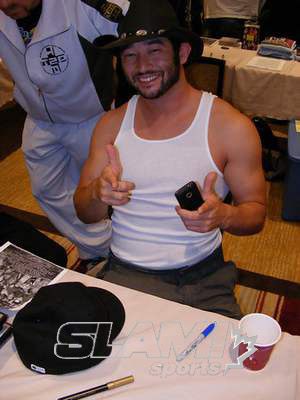 Jimmy Yun as Jimmy Wang Yang in May 2010 at the Legends of the Ring convention in New Jersey. Photo by Michael Coons

Being recognized for his time in WWE alone may now be about to change for Californian born Yun.

“I have always thought about a business to get into after wrestling.” Yun told SLAM! Wrestling. “I thought pest control would be good because there will always be bugs and people will always want to get rid of them. It took a little while to get everything up and running but it’s doing well now.

“I know [me doing] wrestling will not last forever and I don’t want to end up in a wheelchair. So, I thought about what to invest in. Pest control and your clientele have a repeat service as spraying can happen twice a year.”

Since originally joining WWE, back in March 2001 after his contract was acquired in WWE’s purchase of World Championship Wrestling, Yun had three separate stints with the company.

Yun, whose father is Korean and mother is Caucasian, states that while he didn’t expect his most recent release from WWE to be forthcoming he could see that they wanted to start implementing a youth-oriented talent movement.

“I learned from my past that I don’t need WWE to survive so I didn’t take the news too badly.

“I could have done a lot more for them if they let me. I miss wrestling in front of thousands of people, like what WWE offers you the chance to do.”

Upon his most recent return to WWE back in 2006, Vince McMahon came up with the idea that Yun portray a cowboy gimmick. While it was McMahon’s idea, Yun had some input as he came up with the image and overall character.

“I was glad that I was going to be an Asian American character instead of being a stereotypical Asian character.

“I didn’t really care about what character I was going to do as long as they were paying me to be a wrestler. Being a WWE superstar is a lot better than working 40 to 50 hours a week in a regular job.

“I think the Jimmy Wang Yang character was a gamble for them, I had a lot fun doing it though.”

Despite leaving WWE and focusing on other interests, Yun is still active in the wrestling business taking regular bookings as well as running the now re-opened professional wrestling school, Pro Training LLC, in Cincinnati.

“I ran the school for two years while I was in WWE but with my schedule it got to be too much. Even though I have other interests, I think I will always wrestle because I love doing it. I love pro wrestling.

“Right now though, my main focus is trying to make my pest control business a success.

“I live in pain from wrestling, my whole body aches. I have suffered hundreds of bumps, bruises and a few concussions in my career.

“I have a kid now so I want to make sure I can walk when I’m older.”