Bernie ‘The Cat’ Livingston was happily a part-timer

In an era when many independent wrestlers lament the fact that they only work once or twice a month, it is easy to forget that there was once a time when grapplers such as Bernie Livingston chose to only work every weekend.

Working a “real job” and spending time with family took priority over the ring dreams. 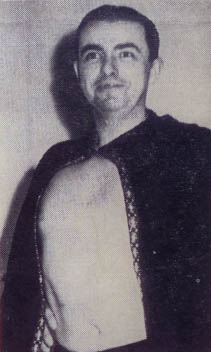 Bernie Livingston in his heyday.

“There was no shortage of work,” said Livingston, who started wrestling in early ’50s, was busy in the mid-’50s into the ’60s, and held a valid Ontario Athletic Commission wrestling license until 1981. “Every weekend, I’d be working somewhere. If there was any wrestling within the vicinity, I’d be there; when I say vicinity, that’s 100, 150 miles.”

He couldn’t commit to the lifestyle that wrestling demanded. “The only way I could do it is to put my life, my heart and soul into it, leaving the family, and you’re on the road all the time. That’s the only way you can do it, and I couldn’t do it with a young family.”

For Livingston, it was the family business that kept him close to home. Livingston Carpet was started by his father in Port Credit, Ontario — now a part of Mississauga — in 1945, and still is operated by the family today in the west end of the city. From an early age, Bernie was in the store every day after school, cleaning up, vacuuming.

Though he started wrestling amateur when he was 12 or 13 in school, it was judo that gave him his first break. A judo instructor from downtown Toronto asked Livingston to come to Maple Leaf Gardens for a demonstration during a wrestling show; Livingston said he made $150 just for the demo — “a lot of money in those days.” Though MLG promoter Frank Tunney had to veto any future demonstrations because amateur and professionals couldn’t be on the same show, Bernie had seen the wrestling and figured he could do it.

Livingston started calling Tunney regularly, and at just 175 pounds, Tunney brushed him off: “You’re too small. These guys will kill you!” But the promoter did say to call him again when he got over 200 pounds.

It was a challenge for the slight Livingston. Eventually he made it, and started training with Fred Atkins around 1952. “We stayed at his place for about a month, training,” Livingston recalled. “Every damn morning, get up, no shoes, no running shoes, nothing on, running on the beach. Boy oh boy, you don’t know what that’s all about. He was tough. No favourites. No matter how good you were, or how bad you were, you’re all the same in his eyes. He was tough and he made something of you.”

In Toronto’s west end, he furthered his skills on an almost nightly basis, and then spent two weeks at Whipper Billy Watson’s farm, “just polishing, the things that you can do to have a little bit of finesse. He was good at that.”

Livingston wasn’t going to be allowed to wrestle in his debut match, even though his hometown of Port Credit had been postered and his family and friends were there. He happened to run into Merv McKenzie at the show, who was the Ontario Athletic Commission boss, whom Livingston knew. McKenzie pulled a few strings, “so I did get on that night.”

His first bout was against Bull Johnson, who outweighed him by 60 pounds. “It was just like being in there with a brick wall. I couldn’t do anything. I didn’t know enough about it, I wasn’t smart, I didn’t know enough, so I just tried to do what I thought I could do. I said, ‘I’m not going to do anything here.’ I was sweating like a bull. I thought, ‘This is awful. I should never have done this. He’s going to kill me.’ I had him up against the ropes. He put his head right on my shoulder, and he said, ‘Punch me in the stomach. Then when I go over, give me a flying mare.’ … When he was down, I tried to pin him — as if I could. He talked to me again, ‘This is going to be for a couple of minutes then I’m going to cover you. Give me a couple of armdrags’ — which I did. One of them, he countered it. He put me down. … He made me look like a champ.”

The Port Credit newspaper — which gave him lots of press over the years — nicknamed Livingston “The Cat” for his leap over the top rope into the ring and his perpetual motion. “I just kept moving up and down, up and down, just like you see boxers doing.”

Livingston’s name, under a few remembered and forgotten aliases, dots cards here and there from Montreal to Pittsburgh, with occasional forays to the likes of Charlotte or Atlanta. “I’m not a big name, that’s for sure,” he laughed.

But he did help out the big names on occasion, as Tunney would ask Livingston, a licensed pilot, to fly wrestlers in and out of town, often working the shows himself to help out if the promoter was a man short. 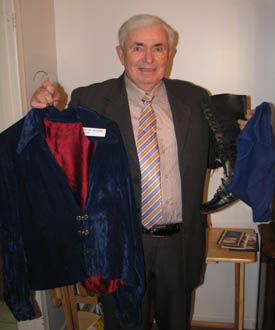 When Livingston’s name comes up now, it is often in relation to the carpet store’s old warehouse, where, it the late ’70s, he bought a wrestling ring from Nick DeCarlo and set it up. There, Livingston allowed wrestlers to be trained by the likes of Phil Watson, Big Mac and Moose Scott, occasionally helping out himself. As well, when the Mississauga Boxing Club unexpectedly folded, Livingston invited the boxers to use his facility, which included some weights.

“I had a few guys that wanted to get trained. He says, ‘You know what? You set up right here at my shop. We’ve got the carpet cleaning part in the back. It’s warehouse. You set the ring up. You’re welcome to come out here.’ So I used to go out there twice a week and train the guys,” recalled Watson. That second class of Watson’s included, most notably, Jet Star, who was a regular for Dave “Bearman” McKigney, and Danny Marsh, who worked as Danny Littlewolf until taking a job in 1987 as a referee and driving a ring for WWF out of Toronto.

Marsh credited Livingston not just for the facility. “Bernie took me in the office one day, and basically smartened me right up to that whole deal,” Marsh said. “‘When things get going, if things get good for you, here’s how you keep your humility.'”

Livingston’s was a strange place to work out in, said Marsh. It was only open to the wrestlers on weekends — the store closed at noon on Saturdays, and was closed Sundays in those days. Wednesday nights was a chance for the established local wrestlers to come work out.

“We were limited in the time we could use Bernie’s gym. You couldn’t be there a lot when the store was open because you could hear the noise out front. Even though we had the ring to the farthest end of the warehouse, if anybody took a big bump, they could hear it in the store.”

Sharing the space kept Livingston involved with a newer generation (and his son, Bill, learned some bumps too).

He looks back at it all wistfully.

“Those who are old enough to remember would remember me as a good, clean wrestler. I knew all the holds. I was a perfectionist. I practiced and practiced them. Thank God I had the facilities back at the warehouse. I had people come in all the time. The only one that was any better than me was Phil Watson. Phil Watson was a perfectionist, he sure was. He knew everything there was to know about wrestling.”