FORT WORTH, Texas – The Texas Shootout started innocently enough. Red Bastien would meet Bronco Lubich for lunch, and over the course of conversation, decided they should invite Ray Stern next time. From there they invited Karl Kox, Lord Alfred Hayes, Mike Padousis, then myself. Certainly the novice of the group, I reveled in all the great stories that I was privy to. When Red asked me to help him expand the get-together, I was more than happy to oblige. 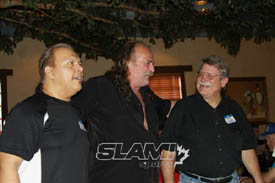 That was during the mid-1990s, and this past weekend saw the Shootout grow to 146 wrestlers and family for the event in Fort Worth, Texas. Coincidentally, February 19th also marked Red Bastien’s 80th birthday. Sadly, over the past few years Red has been beset with Alzheimer’s disease, and presently resides in a care facility in Minnesota under the watchful eye of his family. Many a glass was raised in his honor, as well as great road stories with his close friend Killer Karl Kox leading the charge. You would be hard pressed to find anyone who didn’t consider Red a friend.

Currently the Shootout is organized by the very capable hands of “Cowboy” Johnny Mantell and his beautiful lady “K”. Both had been attending as guests for years, and wanted to expand and keep the tradition of the wrestling brotherhood going strong. Their hard work was appreciated by all who attended, as everything was first class and organized.

Coming from a wrestling family and having quite a career himself, Johnny now runs free open clinics for the young guys on his ranch in Bowie, Texas. Many of those young men attended Saturday, and were in awe of the who’s who of wrestling that was in attendance: 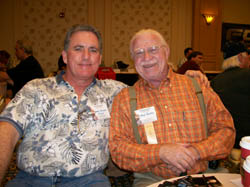 My apologies to the masses that I have left out!

Different from other reunion-type gatherings, the Shootout is restricted to only those people who actively participated in the business and their families. That’s what has always made so special that people came from all over three states, and three countries! With so many of our comrades no longer with us, keeping in touch once a year is a can’t miss opportunity.

Thanks Red, Johnny and “K”!

Larry Dwyer worked as a wrestler and occasional referee in Texas in the mid-’80s.