BUFFALO, NY – A sports-talk radio personality recently pegged sports fans in Buffalo as just a little more down-to-earth than those in other major markets. Buffalo’s economy is understood to be stuck in a dismal state, so when fans fork over their money for the Bills, the Sabres, or for when the WWE rolls into town, it’s a significant decision on their part. There’s an understood agreement that these fans deserve to get their money’s worth.

It is especially clear on this night, when the HSBC Arena is filled to capacity, that the crowd is hungry for an eventful Raw with plenty of energy to boo and cheer as they see fit.

The crowd favourites are ultimately predictable, as Triple H kicks off the show to a raucous welcome from the Western New York crowd. The anonymous Raw General Manager’s announcements received reactions that felt more like exasperation than anything else, leaving the lustiest boos for Michael Cole. For Cole to be vilified as the number-one bad guy – not The Miz, not CM Punk – is a rather impressive feat. 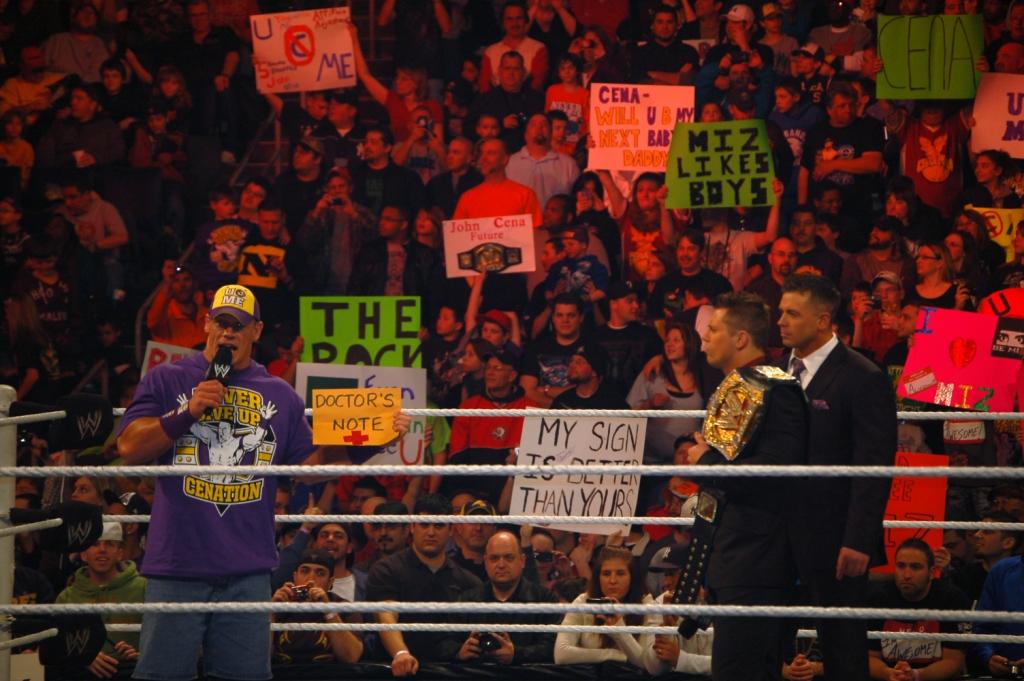 Still, for my money, no wrestler elicits a more passionate response than John Cena. At the very mention of his name, the fans are eager to show where they stand on the challenger for The Miz’s WWE Title. Sure, the stereotype holds true as his cheering section has a noticeably higher pitch than the boos awaiting him, but there’s nobody on the roster that currently gets people more fired up or vocal.

An honourable mention must go to Randy Orton, though, whose adoration from the fans is reaching the level where he can do little to not get cheered. When a character like Orton crosses over to babyface without really changing their sensibilities, it can lead to awkward moments like the thundering ovation he got for punting the unsuspecting Michael McGillicutty. Earlier, a particular group of female fans were screaming their adoration for him and everything he said, including his detailed and disturbing plans for putting CM Punk into a permanent debilitated state. He could say or do no wrong.

And then there’s The Rock. When the WrestleMania host made his in-ring appearance a few weeks back, he had seemingly every person in the arena in the palm of his hand. It almost seemed unfair to pit him against Cena, with The People’s Champ enjoying unanimous support versus Cena’s split-reaction.

Tonight, however, The Rock spent some of his goodwill from the fans with the one long-standing habit of his that draws the ire of WWE fans: appearing on the video screen instead of in the ring. His catchphrases got cheers, the crowd helped him out with “The Millions”, and he got his laughs by mocking Cena’s rap; but there was definite grumbling amongst the crowd, seemingly feeling slighted by watching The Rock do his thing from his home rather than from theirs.

In the sign-watching department, I had one particular favourite. As Triple H entered the ring, there was a smattering of sign predicting the outcome of his match with The Undertaker. There were the customary 19-0 and 18-1 signs, suggesting which way the streak was going to go – but one sign boldly proclaimed 18-0. What could it be predicting? A no-contest? That one of them will be injured again before WrestleMania? Or were they just reminding Triple H where things stood right now? 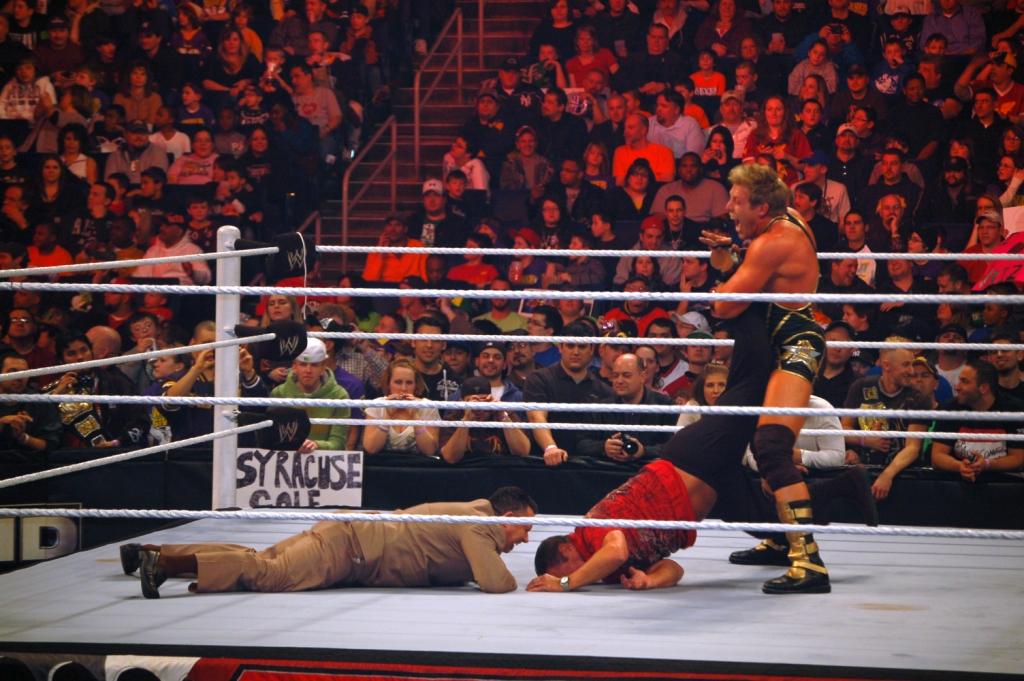 Michael Cole gets in the face of Jerry Lawler, with an assist from Jack Swagger. Photo by Patty Hillhouse.

After the show went off the air, Cena teamed with Orton to defeat The Miz and CM Punk, with Michael Cole serving as the referee. It was after the match that Cena had a chance to speak to the crowd and thank them for showing up. He thanked Orton for showing up. He made a clear, pointed stab at The Rock for not being here, and in doing so received a much fuller cheer of appreciation from the fans. Orton stuck around for a long time high-fiving ringside fans and signing some autographs, too.

Buffalo fans know what they like, and, as Cena suggested, appreciate their athletes and entertainers showing up and putting in their hard work. The arena was quick to fill and slow to empty, proving a good time was had at the HSBC.