Phoenix has risen again and again 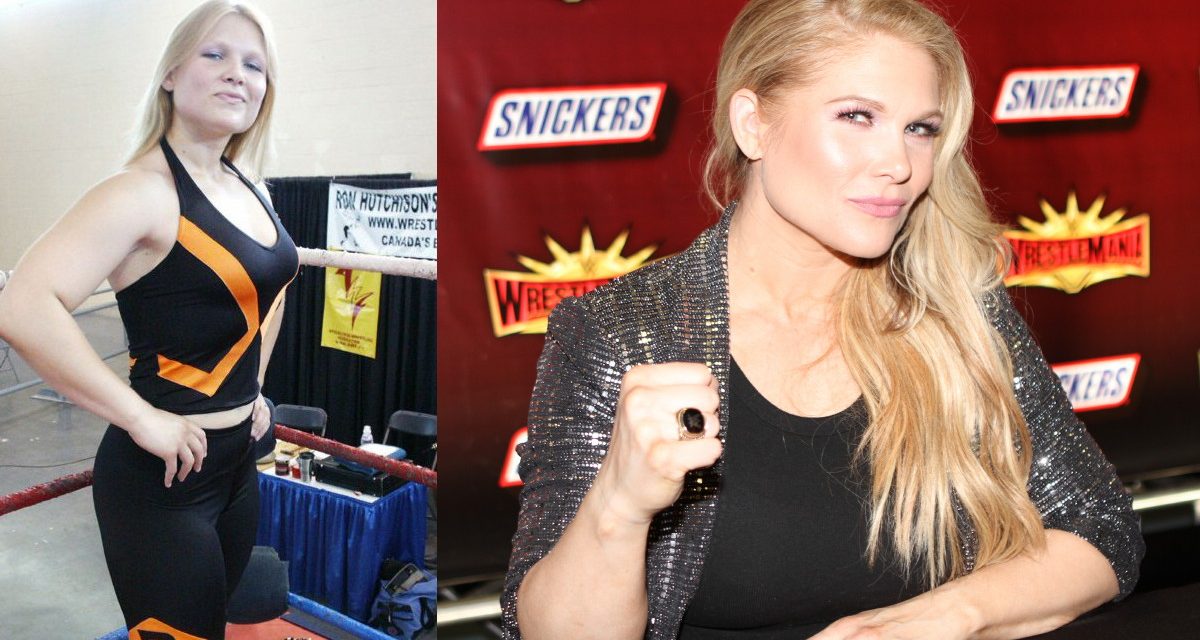 Beth Phoenix is heading to Toronto on Saturday for a Smackdown house show at the Ricoh Coliseum. It’s a long way from the small bar she used to wrestle in a decade ago, out in Toronto’s east end.

That was in the Apocalypse Wrestling Federation, and a remarkable crew of women came through its ring and went on to greater success, including Trish Stratus, Gail Kim, Traci Brooks, and Jillian Hall.

The trainer and promoter behind the AWF was Ron Hutchison, who also helped train Edge and Christian. And, while Phoenix (Beth Carolan, a native of Elmira, NY), may have begun her training in Buffalo, she owes Hutchison a lot and stays in touch. 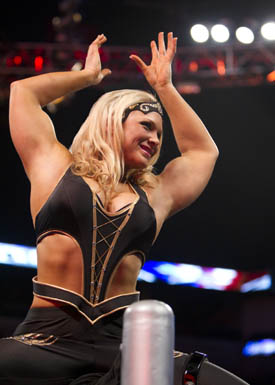 “There’s a lot of us that spent time there, and learned the craft from Ron,” Phoenix told SLAM! Wrestling. “I have to say that he was somebody, I didn’t have a dime going up there to wrestle for him. He always made sure to give us a hot meal and make sure we got paid and we were taken care of, and we had an opportunity to work and learn.”

Hutchison, who began wrestling in the early ’80s after training with Sweet Daddy Siki and Johnny Powers, was well networked by the time Phoenix came north in 1991, where she worked as a second to Joey Knight of The All-Knighters and then as the Fabulous Firebird Phoenix.

“He also worked hard to get us connections and opportunities to get seen by WWE. He was all about his talent, and all about putting on a quality show. He just really, really taught me that, if you love this, that you can be successful,” Phoenix explained.

Gail Kim, Traci Brooks and Phoenix all went to a WWE tryout together. “Gail Kim was signed that day and became women’s champion just a couple of months later,” Phoenix recalled. “It was crazy how much talent came out of that area, and still is successful to this day, Gail being a WWE diva as well, a former TNA champion, women’s champion.”

Phoenix shared some of the lessons learned from her early days in the business. “I think that for anybody that wants to get into the wrestling business, and WWE in particular, I think you just have to believe in yourself above all. I think any of our Hall of Famers or veterans, anybody who’s ever enjoyed great success in our business, has been somebody that just believes in themselves even when nobody else did. Don’t take no for an answer. Even in my early days, I was adamant that I was going to make it. I certainly didn’t fit the diva mold from the start, but I kind of carved out my own niche, found a way to be something special and unique, and to make it in my own way, which really isn’t the way others had gone. It kind of found my own path. I think it’s above everything confidence, knowing you can do this better than anybody else.”

Phoenix’s drive and determination not only got her a shot at WWE, but it has helped her come back from two injuries which left her on the shelf. The first was a broken jaw just a month after finally being called up to the main roster in May 2006.

More recently, she tore her anterior cruciate ligament, or ACL, in May 2010, and returned at the Survivor Series, helping Natalya defeat Layla and Michelle McCool.

“Obviously injuries are a risk of the job,” she said, adding that they can happen whether you are cautious or reckless. “The ACL injury was just kind of a freak, fluke thing, as well as when I broke my jaw back in 2006. Both things, it wasn’t anything that I did wrong, or my opponent did wrong, it was just a fluke. But like I said, therein lies the secret of my longevity is I’m pretty resilient, and I’ve had many other bumps and bruises, scratches and stitches, and all sorts of things. It’s just your ability to love what you do enough to come back from it.”

Hence the phoenix rising from the ashes metaphor image.

“It was difficult mentally. I tried to adapt a positive mental attitude,” she said. It was good to keep in touch with the fans via Twitter, keeping everybody updated as well.

But nothing can replace a real human being for friendship. 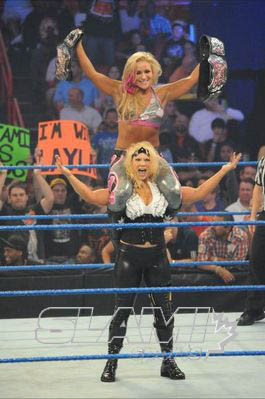 “One really important thing for me while I was injured was Natalya. Natalya and I are very close, and have been for many, many years, and been there for each other through the thick and thin, the ups and downs of our jobs. She was a wonderful, positive influence on my life. She was going through a lot too with LayCool on television. We were kind of each other’s rock during the rough times. Even the Hitman [Bret Hart] has gone out of his way and given me a lot of encouragement. That meant a lot to me, because he was one of my childhood heroes. It was wonderful to have them motivating me along when the going got tough. That’s why me being able to come back at Survivor Series and share in her title victory meant a lot to me because it was a long road for both of us to get there.”

At the TLC: Tables, Ladders and Chairs pay-per-view in December, Phoenix and Natalya teamed against LayCool in a tables match. “I have a lot of experience doing hardcore matches and such from my independent years, in other organizations that I worked for,” Phoenix said. “It was kind of cool because in WWE, I’d only had a couple of opportunities to do something like that and the tables opportunity was unique. I think in all WWE history, there’s never been a female tag team tables match. Every little bit that I get to raise the bar for the divas is very special to me.” 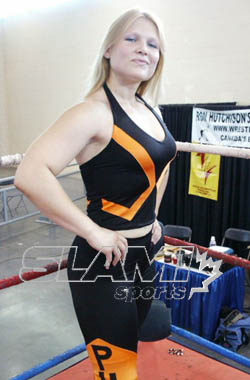 Beth Phoenix strikes a pose before her bouts at the Canadian National Exhibition in Toronto for the AWF in August 2001. Photo courtesy Apocalypse Wrestling Federation.

Being off TV can be an advantage too, she admitted. “Especially with there only being one divas title, the competition is much fiercer amongst the girls, and there a lot fewer opportunities. I think that a little bit of time off can give you a new life and a new motivation. Plus, when you’re sitting back and watching your friends perform and do what you love doing, it really lights a fire under your butt to get back and to get back in the swing of things and be the best you can. I know I sure didn’t like sitting at home.”

There is a lot of talk about the immanent debut of Kia Stevens, who was Awesome Kong in TNA. Naturally, Phoenix has heard it too. “There’s been a lot of chatter around about her being signed by WWE. I think a lot of people, their first inclination is to think that it would be quite a clash to see us in the ring together. If we get that opportunity, it will be amazing. I look forward to it. She and I have never wrestled each other, not even on the independent scene or anything. I think it will be quite the spectacle to have Awesome Kong and Beth Phoenix in the same ring at the same time. Hopefully we’ll get to see that in the near future.”

Compared to some of the other divas, it can sometimes look like Phoenix is a tree fighting a branch. She agreed that there is a difference working against bigger or smaller foes. “When I’m larger than my opponents and I have the strength advantage, I try to use that to gain leverage and to defeat my opponents. My strength is a big part of my game. But the other part of the Glamazon, which makes me special and unique compared to all the divas is that I really have that phoenix aspect of me, where you can’t keep me down for long. I’ve had surgeries, I’ve had injuries, I’ve been knocked out, but I think I’m tougher than your average diva. That will probably come more into play with a bigger, stronger opponent where it’s really going to take a whole lot to get me down and keep me down. I think I have that resilience that makes me really unique amongst the divas.”

Billed as “The Glamazon” for her beauty and strength, Phoenix is surprisingly modest about her feats in the gym. “I’m not a powerlifter. I don’t compete professionally. All my weightlifting and all my efforts in the gym are to be the best WWE diva that I can possibly be, and to be unique,” she said. “My standards coming to WWE were pretty high. I admired Chyna a lot and I dreamed of one day setting the bar higher for the girls. Each time I go into the gym, it’s more of an effort to be better in the ring, not to break records. But I do have to say that any time you see me in the gym, it’s quite an impressive thing.”

Are your numbers better than some of the guys? “I would definitely say so, and if you don’t believe me, ask the guys — they’ll tell you better than me. I like to be humble about the numbers.”

Getting ready in the dressing room of a huge facility that seats 18,000 is a far cry from sharing the kitchen space with the cooks at Cactus Pete’s in Scarborough. What’s it like for a diva backstage? “I think that the life of a diva backstage is hectic. We have to do all the same things that the guys do, compete in the ring, and go out there and perform in front of the fans. But at the same time, we have to do it with very elaborate makeup and hair and costumes; sure the guys have great costumes, tights and gear too, but I would say there’s a little more makeup, hair, and all those beautifying things that maybe the guys don’t have to endure,” she said with a laugh. “Our costumes and our jobs are just a little more challenging, to keep your hair looking great while you’re flipping and flying around.”

Phoenix is very proud of the women’s division in WWE. “With our company, we have a moniker with the divas: Smart, Sexy and Powerful,” she concluded. “Our company is really big on us not just being beautiful, not just being about our looks, but also presenting our girls as role models. Most of our divas are greatly educated and would be happy to talk to you about current events and important issues. I think that we all work hard to be something that little girls want to emulate — not just Barbie dolls, we’re more than that.”
RELATED LINKS

Greg Oliver has fond memories of the AWF shows around Toronto, whether it was interviewing the Iron Sheik, dinner with Terry Funk, or seeing up-and-coming talent. But whatever happened to Ms B Haven? If he/she is still out there, email me at [email protected].