In front of a packed home crowd, The Rated-R Superstar capitalized on a number of opportunities during the bout, which happened to spilled into the stands and entrance ramp to the delights of many. 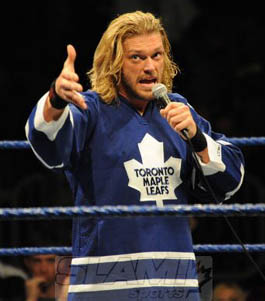 Edge addresses the fans — and his mom — after the show Saturday at Toronto’s Ricoh Coliseum. Photo by Mike Mastrandrea

Ziggler, clad in a Maple Leafs jersey crossed-out in red tape and whose anti-Leaf rants and gifts of waffles antagonized the crowd earlier on, had the champ in the middle of the ring locked in the sleeper. Edge fought it off to nail a front-face DDT. Sensing victory, he thought about the spear, but missed it via a nifty Ziggler counter. Dolph proceeded to grab a steel chair, but was nailed by the Spear for his efforts.

The match had a good pace and mix of outside and in-ring action. A hilarious sequence had The Ultimate Opportunist pull out a hockey stick and roof one of Dolph’s waffles — as they say in hockey — top shelf, where they keep the peanut butter.

Beth Phoenix and Natalya overpowered Kaitlyn and Layla in a match with an old-school tag-team feel. Phoenix even tossed in an airplane spin, making one wonder if Mike Rotundo was secretly in attendance.

Chris Masters valiantly attempted to masterlock Alberto Del Rio, but the 2011 Royal Rumble winner cleverly reversed it into his patented arm-bar submission for the win.

Kofi Kingston absorbed a ton of punishment early, but had enough in the tank to defeat Kane, who had won the right to challenge him by winning the Royale earlier. The Big Red Machine had Kingston in the chokeslam position, but Kofi somehow got out and connected with the Trouble in Paradise to score the duke.

All-American Jack Swagger cut a pro-American promo looking for some respect and earned some with a win over Chavo Guerrero. It seemed weird to hear Guerrero come out to a natural face pop, but that was indeed the case. Chavo made a cardinal mistake of hesitating on the top rope deciding to go for the Frog Splash. Swagger knocked him down and applied the ankle lock to make things official.

Rey Mysterio Jr. had his hands full battling Wade Barrett with The Corre — Heath Slater, Ezekiel Jackson and Justin Gabriel — in his corner.

Despite Mysterio scoring with some outside offense and kicks to the knees, it was Barrett on offense early and often in the bout. And when he wasn’t, The Core was, interfering behind the ref’s back. The action resembled a child playing with his food until Mysterio somehow came to life and caught Wade with the 619 and the West Coast Pop for the win, prompting an immediate beatdown from all four men until Masters, JTG, Watson, Guerrero and some others made the save.

All-in-all, it was a solid show, with the fans getting the payoff in the main event.

In other notes, Edge acknowledged his mother, who was ringside, after the match donned a Maple Leafs jersey and thanked the fans while wondering out loud how many more years he had left in his career. He then went for the “cheap pop” of starting a “Go Leafs Go” chant.