To consider the career of Johnny Heidemann, who died today at age 90 after a stay in a Charlotte rest home, one must go back in time. His start in the business couldn’t happen today, his loyalty to a single promoter is almost unheard of, and neither could his longevity — 1938 to 1973. 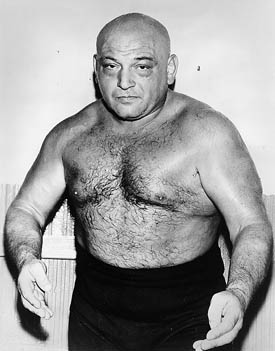 Born December 26, 1920 in New York City, to Eddie and Ida Heidemann, he graduated high school in 1937. An amateur wrestler, he was seen in action by local promoter Rudy Dusek, and his brothers Emil and Ernie of the “Dusek Riot Squad.” They liked what they say, and told the 150-pound Heidemann to get up to 192 pounds, and come see them.

After six months, Heidemann began training with Tony Milano, and debuted four months later in Ansonia, Connecticut. “They were paying me $75 a week just to learn,” Heidemann recalled in a 2000 interview with Scott Teal’s Whatever Happened To …? newsletter. “In them days, that was a lot of money. I only trained about four months as a professional. Rudy thought that was enough, and I thought that was enough, too, because I knew what I could do. I was dropkicking, doing kipups.”

Newspapers usually played up his origins, calling him the “Bronx Badman” (1952) and “Heideman is known as a rough and tough New Yorker” (1954).

Early publicity came during a meeting with Jackie Gleason for his television show. Backstage, Gleason egged Heidemann into putting him in a hold; newspapers claimed it cost Gleason $75,000 to be on the sidelines recuperating from his shoulder and neck injuries. Not one to hold a grudge, Gleason had Heidemann back on his show two more times.

Heidemann worked in Japan twice, starting with Rikidozan’s promotion, before moving on to Antonio Inoki’s group.

Besides under his real name, and various misspellings — Heidman, Heideman — Heidemann worked under a mask as an Executioner with Frank Marconi, and as an Inferno with Frankie Cain in Phoenix.

“He was a tough guy and a little older than me, but he was the best worker they had there by far,” Cain recalled in the same issue of Whatever Happened To …?  “He was a no-nonsense, solid worker. He had a one-two punch to the stomach when he came off the ropes. I copied it and used it my entire career. He’d go into a hammerlock and stick his leg in. He was totally believable. He had a likable personality and was good-looking when I met him.”

The greatest success for Heidemann came in the Carolinas for promoter Jim Crockett Sr. Early in his career, Heidemann helped Crockett nail one of the boys who was skimming money, earning a lifetime of loyalty. Heidemann would later work in the Crockett office, as well as a referee — odd given that he was also wrestling as a heel on occasion as well.

“[E]very now and then, I had to get out of there,” said Heidemann of the Carolinas. “He used to book me out just to let me get away for awhile. I’d say, ‘Mr. Crockett, I want to go away for awhile.’ He’d say, ‘Okay.’ They flew me to Chicago to wrestle Verne Gagne. I went to New York and wrestled Bruno Sammartino. After that, Vince McMahon took a liking to me and had me back every week in Washington. They gave me good money for going back and forth.”

Crockett was a key figure in Heidemann’s life. “[He] was like my father. I loved him. I worked in the office with him. I took care of his shows when he couldn’t go to them. He trusted me, so I’d go to the matches to pick up the money and bring it home. I used to take care of the payoffs for him in the mornings and put the money in envelopes.” 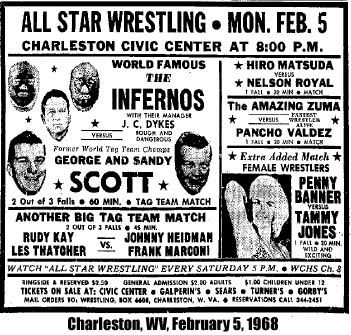 When Crockett Sr. died in 1973, Heidemann lost interest in pro wrestling, and landed a job in the county sheriff’s office in Roanoke, Virginia. He spent 20 years there, and ended up with a good pension. After retiring from policing, he worked as a security guard.

He and wife Dolly married in the mid-’40s, and had a son and daughter.

Heidemann had been in good health up until three weeks before Christmas when he fell and was placed in the hospital. Up until then Johnny drove his truck and visited the YMCA to swim three times a week. He is survived by one son, John, and a granddaughter from his first marriage, Gina M. Hall. There are no plans at this time for a funeral service.

In 2000, he was reflective in his conversation with Teal. “Wrestling gave me everything I wanted. I think the wrestling business was the greatest business in the world. I have to say … I had a good life. I had an excellent life! I wouldn’t want to change that life for anything. If I could do it again, I’d do exactly what I did. I really loved it.”