‘Rowdy’ Roddy giving his all at WrestleReunion

At 56 years old, “Rowdy” Roddy Piper is as busy as ever. Playing phone tag between meetings, he finally gets some free time to talk before making an appearance. His number one concern, he says, is making sure I get what I need from him.

That’s my introduction to one of the biggest names in wrestling history. He’s apologizing to me for the delays, and making me a priority, something that is often lost in the entertainment industry. This attitude is reflected in his participation in this weekend’s WrestleReunion 5 in Los Angeles. Fans can pay for the once in a lifetime opportunity to cut a video promo with Piper on the set of Piper’s Pit, and he will not stop until everyone who wants the opportunity has had it. 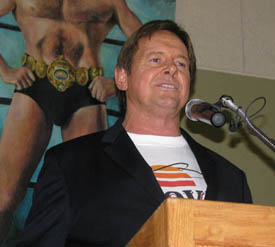 Roddy Piper accepts his induction into the George Tragos/Lou Thesz Professional Wrestling Hall of Fame in Waterloo, Iowa, in 2008. Photo by Greg Oliver

Giving back to fans is important to him.

“I understand it is business to a certain degree, but I have had autograph lines that were four or five hours long and at the two-hour point they want to stop. There is dad and a kid who has been in the line for two hours, I can’t do that. It is just wrong as a performer, a legend, a Hall of Famer. You can’t treat your fans like that, you have to take care of them because they took care of us.”

It also marks the first time that the original Wrestlemania main event heels are together — photo ops are available with himself, Paul “Mr. Wonderful” Orndorff and “Cowboy” Bob Orton. The excitement in Piper’s voice is evident.

“I was thinking about that earlier today. They always say, ‘Which was the greatest Wrestlemania?’ and there is only one possible answer — the one without a number. Those men Paul Orndorff and Bob Orton in 1985 were man-o-war studs in their prime. Top of the cream of the crop. When we all came in that ring, there was a lot of friction between myself and Mr. T, between myself and [Hulk] Hogan, even between Paul and I. We went into this match like that with no road map. We came out the other end and here we are at WrestleReunion. When you go through those kinds of extreme highs and pain and training, and you live through that, you get a bond that is hard to explain. I don’t know how to give you a description of that bond. You are talking about the height of your emotions, egos, your mental and physical capabilities. It is going to be touching at the very least. I will be touching their asses when I throw them over the top rope! But my heart will be touched too because I love them and it is unbelievable we are all there.” 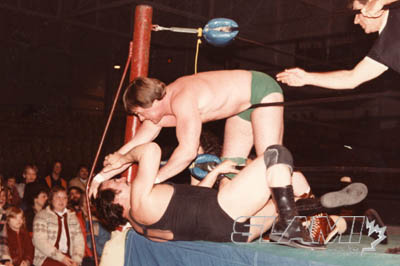 Roddy Piper goes after Rudy Kay in a 1984 bout in Toronto. Photo by Kevin Hobbs.

Reunions are also bittersweet as it may very well be the last time some people see each other. Orndorff has recently been diagnosed with cancer, and “Superstar” Billy Graham will be making his final convention appearance due to his own health issues.

“Billy Graham was the second guy I wrestled when I was 15 years old on TV in Minneapolis. He beat me in nine seconds, breaking Larry Hennig’s 10-second winning streak. So we go way back even before Orndorff and Orton. I am a very unique guy in that I am a national treasure in this business. If you know the history of it, nobody has gone through the loops I have. No one knows and trusts Billy Graham the same way I just described with Bob and Paul, but from a whole different era before those boys were even wrestling. When you put all of that together and make soup you got a lot. It is so unique.”

In addition to autograph, photo and video appearances, Piper will participate in the Legends Battle Royal on the Pro Wrestling Guerrilla show Saturday night. Orndorff and Orton will be in there as well as most of the vendor guests, from Ken Patera to Savio Vega, The Barbarian to Tito Santana. Also in the match is Terry Funk, marking the first time Piper and Funk have ever been in the ring together.

“We’ve never been in the ring together huh? I don’t remember us ever wrestling. I’ve sure been around him a lot but… man I don’t think I ever have wrestled Terry Funk. I can’t believe that. I’ve wrestled Dory [Funk Jr.] a bunch… dang now what am I going to do? You talked about the video promos? Maybe the fans can come up with some bright ideas of what I am going to do with Terry Funk later that night. That can be the promo because I am at a loss here. It will be interesting because Terry is crazier then an outhouse rat, but like a fox.

“If I was to be honest about it, Terry Funk outranks me. Terry and the Funk Legacy, the way Terry won the world championship, he had to follow one of the all time greats in his brother Dory. Dory was so great in his style of being an NWA World Heavyweight Champion. Terry completely changed the approach to the belt and the way he wrestled was different from Dory in such an extreme, but he did it in a different way. One way would be when he had a spot where he had a headlock on a guy and he was shot off the ropes, the other guy drops down and the Terry goes over him. When the guy would drop down Terry would trip as the guy got up because that is the psychology of what would happen. He was that creative and inventive and is a tough, tough guy on top of it. So Terry Funk outranks me… but I’ll beat him.”

It may not be a five star classic, but when the legends collide, Piper promises it will be memorable.

“There will be a lot of ambulances and oxygen tanks for this Battle Royal. Myself I am just going to go balls to the wall, I don’t know any other way.”