On Saturday night the 35-year career of Jake “The Snake” Roberts comes to an end. On the Pro Wrestling Guerrilla card that is part of WrestleReunion 5 Roberts will face protege Sinn Bodhei (Kizarny) in his final match. 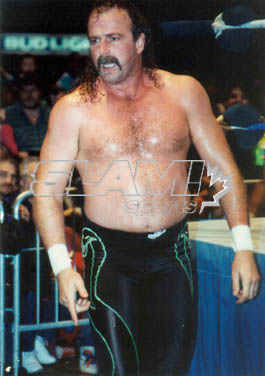 Jake Roberts in his heyday. Photo by Mike Lano.

“Why not make this my last match? It is L.A., and there have been a lot of good moments in my career in L.A. To wrestle Sinn Bodhi makes it that much better,” Roberts told SLAM! Wrestling. “He is someone I like and respect, and have always wanted to wrestle again. I wrestled him a few years ago but he has learned a little bit since then. It will be a good experience.”

Since the announcement of Roberts appearance and retirement, tickets sales for the show have picked up, with only a few non-general admission tickets left. In 2010 they turned away hundreds of fans when the venue reached capacity, so it is advisable to get tickets early. Many fans have bought tickets based on their desire to be there for Roberts’ final match.

“It means a tremendous amount. It makes me think that all of the last 36 years wasn’t a waste. There are people out there hat are sincere and real, they did care and enjoy what I did. It is a different level from not just a fan.”

He is excited to see other wrestlers as well. Many of the convention guests were in the WWF at the same time that Roberts was.

“Orndorff, especially since I understand he has come up with cancer. Piper of course. All the guys really. You get there and your faces connect, you have a laugh and you keep moving.”

Fans can also purchase a Deluxe Photo Op with Roberts and a 12-foot python. For many who have since gone on to own snakes of their own, it was watching Roberts that first instilled their curiosity of reptiles. Whether it was watching him drop a Burmese python on a terrified Andre The Giant, or having a devenomized King cobra bite “Macho Man” Randy Savage, the snakes were as much a part of Roberts mystique as the man himself. 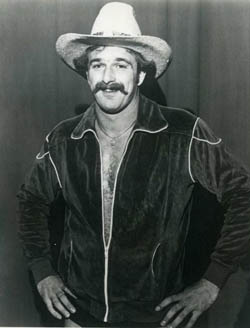 Do you recognize a young Jake Roberts?

“It was just a character in itself. Jake is a snake, the reptile is a snake. As far as dealing with them all these years on the road there have been good days and bad days, days that were like hell. I took the good with the bad. The snakes would travel with me for about a week to ten days and then I would exchange them. I liked the cobra the best, they were the most interesting and a whole lot lighter. The reticulated python was vicious, very dangerous to mess with. They rip a big whole in ya and I have evidence of that. I enjoyed working with the cobra; I found it mesmerizing.”

He isn’t sure of what he will do to celebrate after the match, but knows that post-retirement life will focus on his wrestling school and family.

“I have no idea, I will get that when I get to it I guess. We will find out in a few days. After retiring I want to be doing movies, watching movies, and raising my grandkids. I love being a grandfather, I really do. It just reminds me of what I missed before with my own kids being on the road so much.”

One way Roberts would like to cap off his retirement is with induction into the WWE Hall of Fame. With Wrestlemania being in Atlanta, not far from Stone Mountain, many feel he would be a natural choice to be in the class of 2011 but so far, it has not been discussed.

“Absolutely not. I wish there was but there hasn’t been. It is what it is. I am just waiting patiently.”

Jake “The Snake” Roberts has had a storied career and life. It has been an incredible journey leading to Saturday’s finale. While much has been made of Roberts’ addictions and personal battles, in the end he should be remembered as one of the top stars of his era who grasped the art of wrestling and talking in a way few others ever have. 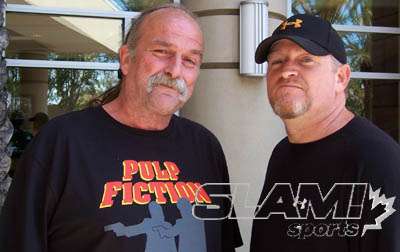 Jake Roberts & The Road Dogg at a Fan Convention. – Photo by Mike Lano

“My past is not the way I have to end my life. I have grown through that and continue to grow through that daily. The problems I accumulated over the years are no different then other people’s problems. The ones I exposed myself and brought to light and was very honest about it are the same problems that a lot of other guys have died from. If I had been as bad as was laid out there supposedly, I would have been dead a long time ago. There isn’t such a thing as being kind of addicted, you are either addicted or you’re not. It is not a pleasant trip for anybody. What I want remembered is that my history was not my destiny.”

Jason Clevett’s first infatuation with reptiles started with Jake “The Snake” Roberts. He now owns over 80 reptiles and runs Calgary Reptile Parties & Edmonton Reptile Parties. He is ecstatic to add Jake Roberts, his favorite wrestler as a kid along with Bret Hart, to his interview list.