Live report from Raw in Detroit

DETROIT – After a disappointing showing from the crowd when WWE last made its way to Detroit in September, fans in “The Motor City” came out en masse on a cold winter night as WWE’s flagship show, “Monday Night Raw” made its return to the city for the first time since August 2009.

In September, the Joe Louis Arena’s entire upper bowl was tarped off. This time, along with the entire lower bowl, half of the upper bowl was filled. Those who came were extremely enthusiastic the entire night, especially for babyface heroes John Cena and Randy Orton. 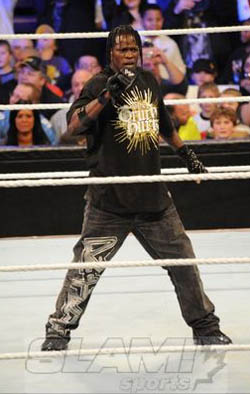 R-Truth was over more than almost anyone in Detroit Monday night. Photos by Mike Mastrandrea

Cena was beloved by much of the crowd throughout the night while Orton received a thunderous ovation when he rushed in to save Edge from The Miz and Dolph Ziggler.

Fans in attendance were treated to two promos just for the live crowd. Prior to the tag team match, each member of the Nexus spoke to the crowd. Mason Ryan spoke in a foreign dialect and David Otunga translated for him. Then, prior to his match with Wade Barrett, CM Punk grabbed a mic and demanded silence from the crowd. Naturally, he did not get it. So he said he was going to show the crowd something that would make them silent. He then had the truck replay NXT rookie Derrick Bateman’s goofy Mark Henry cologne vignette from last week’s Raw. This was just weird.

One fan was so enraged during Punk’s promo that he took his shirt off (revealing a physique that makes Husky Harris look like Chris Masters) and shouted at Punk while giving him the middle finger. He later held up a John Cena sign and did not put his shirt back on until he was getting ready to leave the arena following the show.

The crowd much enjoyed Cena’s actions during the match between Barrett and CM Punk, not surprising considering how into Cena the crowd was.

Raw went off the air to a chaotic scene as members of the WWE locker room came running to the ring to battle both Nexus and The Corre. Once the show went dark, the WWE wrestlers dispatched of the two factions. On the outside, Harris brawled with Corre member Heath Slater.

It was Nexus member Otunga, though, who didn’t make it out of the ring in tact. Otunga was beat down by the Raw team. He was first given a choke slam by the Big Show and also was on the receiving end of a Cobra from Santino Marella and an Attitude Adjustment from John Cena.

Otunga tried to roll to higher ground but was brought back into the ring by Marella and got another choke slam from Big Show.

With the dastardly heels dispatched of, the babyfaces took the time to fraternize with the ringside fans before heading to the back. 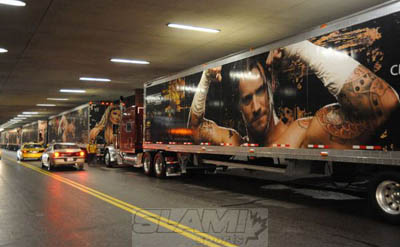 WWE trucks are parked under the Joe Louis Arena.

In the evening’s dark match, NXT Season 2 competitor Percy Watson defeated William Regal in a short match. For this week’s edition of Superstars, two matches were taped. In tag team action, Zack Ryder and Primo, apparently now a tandem, competed against Yoshi Tatsu and David Hart Smith. In the other Raw match, Tyson Kidd took on R-Truth. Truth was one of the most popular figures on the entire show.

Surprisingly, it’s possible play-by-play man Michael Cole was the most hated person by the crowd. He came out to extremely loud boos and was booed loudly when he read the anonymous general manager’s first e-mail. When World Heavyweight Champion Edge called Cole a “tool,” it received one of the louder reactions of anything on the show.

Overall, the Detroit crowd, once again very kid-heavy, redeemed itself for a poor September showing with a solid effort here tonight.