Savio Vega fired up for WrestleReunion 5

WrestleReunion returns to the LAX Hilton in Los Angeles, California next weekend, January 28-30th. With a stacked line up of guests and loaded Ring of Honor and Pro Wrestling Guerrilla shows, it promises to be a memorable weekend for both fans and wrestlers. One such guest who is excited is former WWF star Savio Vega.

“For a long time I have known a lot of wrestlers and people that have been in it. So this time I am lucky to be part of the convention. I get to see a lot of guys and be in a battle royal on Saturday,” Vega said on the line from his home in Puerto Rico. He is thrilled to meet fans who followed his mid-’90s WWF run. 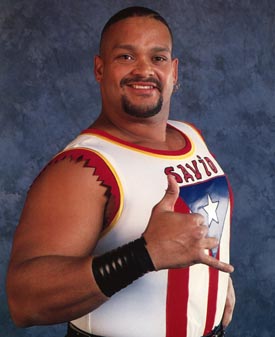 Savio Vega in his WWF heyday.

“I was in WWF from 1994-1999 as Kwang then as Savio Vega, then Los Boricuas. I wrestled all over the world with them. Fans bring memories and pictures that I never knew existed from events I wrestled on, pictures that I took with them when they were kids! It is exciting to come back to L.A. and meet those fans. I was there many times and I am looking forward to seeing what they bring. Some of the Spanish-speaking wrestling fans will be around the reunion. I am crazy to be there and counting the days. L.A. wrestling fans here comes Savio Vega!”

“It is good to see those guys. I wrestled Mil Mascaras when I was starting as TNT in Puerto Rico 20 years ago. To see him and Dos Caras will be a pleasure. These guys, we know each other because we cross each other in different companies through Latin America. It will be an honor to see these great, great wrestlers.”

In addition to the signing Vega will be in the “Legends Battle Royale” on Saturday night’s Pro Wrestling Guerrilla show. Some of the faces in the ring with him, like Jim “The Anvil” Neidhart and Sean Morley are familiar from his WWF days. Others like “Rowdy” Roddy Piper, “Cowboy” Bob Orton, and Ken Patera will be new.

“I have had some big time battles in Puerto Rico with the crazy Terry Funk and Barbarian as well. With the rest of the guys, I know some of them very well. Some have come to Puerto Rico to wrestle, others I wrestled in the States and some I have never wrestled before. It is going to be an honor for me to be in the same ring with these guys.” 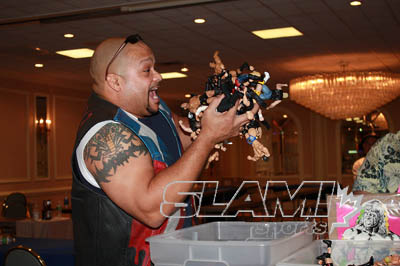 Savio Vega checks out some dolls at a fan fest in July 2010. Photo by Christine Coons

It still seems difficult for a Hispanic wrestler to really break out in American wrestling. With the exception of Eddie Guerrero, Rey Mysterio, and likely Alberto Del Rio, there are not a lot of Latino headliners since Pedro Morales. Carlito and Vega at times seemed on the cusp of breaking through but never did. He admitted it can be a challenge.

“The time that Pedro was there everything was a lot different then when I was in WWF. It is hard. Being Latino in WWE at that time was big for me and the Latino people as well. Later WWE launched a half hour Latino show, Super Astros. I was part of it along with Vince Prichard and Victor Quinones. It was great but it didn’t do the business Vince [McMahon] wanted and was cut,” he recalled.

“Carlito had a great opportunity, he threw that in the garbage. I don’t know what happened with him but that is his business. It is hard to see someone grab that opportunity and waste it. If you don’t like the business don’t get in, let someone who likes the business have that opportunity. You don’t know who is the next Latino to come on board. I don’t want to say things are racist; WWF was not — they treated me great, but there were times when I didn’t get the opportunity. I believed that I had the talent to work on top and be a big deal and I wasn’t. I broke two rating records when I wrestled Bret Hart for the title as Kwang, and when I wrestled Undertaker as Kwang also. I believe if I break two records with two superstars, that means something is good. Bret had his name, he was champion but you need another part. It was tough for me to know that I did that. Why I didn’t have more opportunity, that is a good question to ask the big boss over there, because I don’t know to be honest.”

Vega was an important part of launching Steve Austin’s WWF career. Austin’s first major feud, when was “The Ringmaster” was with Vega, including a match at Wrestlemania 12 and a “Caribbean Strap Match” at In Your House: Beware of Dog in May 1996. The latter match had to be redone when the power went out during the original broadcast.

“We were in San Antonio, Texas, and Pat Patterson called me and said, ‘You are going to wrestle Steve, this is going to be his first night here, let’s see what you can do.’ It was the first time I had met him but I knew he’d had a big-time career (in WCW). From day one we had a chemistry big time, we didn’t put nothing together; we just went out to see what would happen. The rest of the story is history. The big match we had, the Caribbean strap match, we had to do that match twice. As soon as I walked out for the match, there was a big lightning storm and the power went off. We did the match in the dark, the people could see us, of course, but it was the real dark match. We did the entire match and the lights didn’t come back. So on Tuesday they had to give the pay per view to the people so we did half an hour and beat the hell out of each other. I missed a pay per view where I was supposed to wrestle him; I got injured and he wrestled Triple H. That is the curse of life, one thing happens because something happened the other way. He continued his career and I finished up, but it was good to be part of that era and early Stone Cold.”

Since leaving WWF in 1998 Vega has been working out of his native Puerto Rico, where he got his start as TNT in 1989. He has been involved with IWA both as a wrestler and working backstage.

“When I left WWF we opened a company here called International Wrestling Association which is still standing after 11 years. The style is different, the people in Puerto Rico still believe big time. We work hard for the fans here, we give a lot to make the business run. It is hard because the Island is 100 miles by 35 miles. A fan can follow you every weekend and you have to do different stuff every day. It is not like the States were you go different places and do things the same with a different crowd. Here you have to work hard and the storylines have to be based in reality. We started again January 5th and the fans came back big time for the company. Like everyone Puerto Rico is struggling because of the economy. But I believe we are going to do very well this year. We mix local guys with guys from the States and put our soul into the company to have the best quality business.”