Take a quick glance at the rosters of the two major promotions in North America, WWE and TNA and you will notice that there is a pretty strong British and Irish contingent impressing in both companies. The next name on the big rosters, joining the likes of Sheamus, Drew McIntyre and Rob Terry just could be “Vigilante” Johnny Moss. 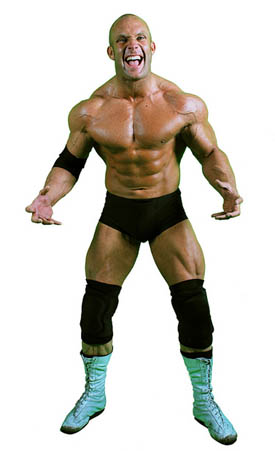 As part of TNA’s Maximum Impact tour, which starts on January 27th and takes place for three nights throughout the United Kingdom, TNA founder Jeff Jarrett will face one of Britain’s best on each date of the tour in his “JJ MMA Challenge” which offers a $100,000 prize to anyone who can submit him.

On January 29th, at the Wembley Arena in London, Moss hopes to make a big impression and take great strides in heading over to America, as he takes up Jarrett’s challenge, in what is undoubtedly the biggest match in his career. (The other opportunity is for Scottish champ Lionheart two days earlier.)

Moss, 30, has seen his career span over 11 years, he is a former five-time NWA United Kingdom Heavyweight Champion and he sees this match as a huge opportunity but realizes he needs to keep his feet firmly on the ground.

“There is no doubt this is the most important match of my career, I have to go into it as any other night I would wrestle, I have to think it is just another match even though the magnitude of is huge,” he told SLAM! Wrestling.

“Originally I was just asked if I would participate on the show, which was an honour in itself. It was already daunting because Wembley is such a magnificent venue and TNA is a great company but when I was told I was going to face Jarrett that just made the moment even more special for me.”

Cumbrian born Moss is a very versatile performer who can easily do the European mat style mixed with shoot and submission wrestling. Moss was trained by “Sledgehammer” Andre Baker at the Hammerlock UK wrestling school and it was at this facility that Moss honed his skills.

Baker, had a massive influence on Moss’ career and over the years the two become very good friends until Baker committed suicide on May 16, 2010. Moss believes that his trainer would have been proud and wishes that he was here to share the moment when he steps into the ring against Jarrett in Wembley, London.

“I took the intensity that he showed in the ring and added that to me. He would always help me out and take me under his wing and I am eternally grateful for all he did for me,” he said.

“He was going to make a comeback to wrestling and I was very supportive of this. I knew he was going through a hard time, I spoke to him Friday and then tried to ring him Saturday but there was no answer. It was at 1 a.m., on the Sunday morning that his sister rang me and told me he had hung himself.

“That was a real hard blow for me. It took a while to come to terms with that.

“I wish he was here so I could tell him about the match in Wembley, I wish he could have seen it, he would have been so proud.”

Over the past couple of months on TNA Impact!, Jarrett has embodied a new gimmick, The Double J, Double M.A gimmick has been entertaining and it seems he is really starting to grow well into his new persona.

Moss, who stands at 6′ and weighs 245 pounds, bases his offence and wrestling style on Chris Benoit, using the hard-hitting style that he embodied mixed with a lot of suplexes. “The Vigilante” believes that he can wrestle any style and that he and Jarrett can mesh well in the ring, when they meet in London.

“If Jarrett wants to go down that route [submission wrestling] then that’s no problem at all. I am very well versed in submission wrestling so I’m good to go on that front. I can do any sort of style that he wants; I could wrestle him in a British style contest or American style, it doesn’t matter to me.

“I am confident [in victory] because I am trained in various styles; I am well rounded and have gained a lot of experience. I’m very intense when I am in the ring, I can assure that anyone who watches me will be seeing one of the most intense wrestlers out there and I give 110% every time I step through those ropes.” 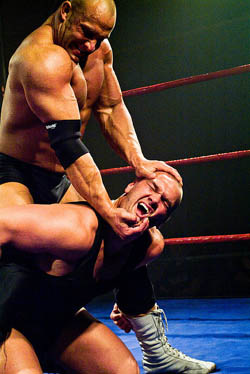 Since the contest was announced this match has been heavily hyped throughout the UK mainstream media with Jarrett himself doing interviews about Moss, the match and the tour itself.

Unless a major company like WWE or TNA comes to the UK shores, wrestling on these islands doesn’t get much attention in the mainstream media, so Moss admits the hype and hysteria surrounding this encounter has been a little unbelievable and more than a little overpowering.

“After doing promotional stuff with Jeff, I was on the train during the long journey leaving London and going back to Cumbria, when I was bombarded with texts and e-mails saying congratulations. It was nice to know that so many people were behind me.

“My girlfriend and daughter are coming down to watch, I would love them to see me in the ring with that many people watching.

“This match could make or break me and my career. Hopefully this will lead to something else with TNA.

“I’m looking forward to the opportunity to showing Jeff what I can do. I think the fans can expect a great match and hopefully a Johnny Moss victory.”