WWE wrestler The Great Khali — real name Dalip Singh — and his bodyguard were involved in a shooting at the home of a senior Indian politician on Friday, according to India’s most prestigious 24-hour news channel, Aaj Tak. Three people have been seriously wounded. The former WWE Champion was invited to the home of the Deputy Speaker of the Punjab State Assemby, Mr. Satpal Gosain (BJP), as Mr. Gosain’s grandson is a big fan of Khali. 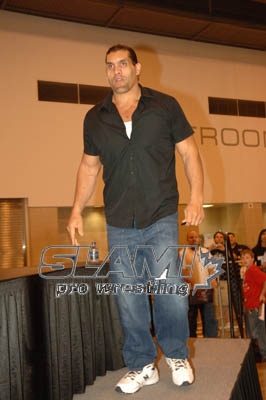 The Great Khali at WWE Fan Axxess in Orlando for WrestleMania 25. Photo by Mike Mastrandrea

Local fans had assembled outside Mr. Gosain’s residence in the city of Ludhiana, in anticipation of Khali’s arrival. When Khali arrived with his entourage, the children approached him for autographs and photos. According to Aaj Tak, instead of receiving autographs and photos from the WWE wrestler, they received bullets.

According to eyewitnesses, including the Deputy Speaker’s relatives, Khali’s bodyguard was hostile from the start. His bodyguard shoved children as soon as they tried to approach Khali for a photograph. A few minutes later, he grabbed a boy, and started to beat him. The crowd tried to rescue the boy from the bodyguard’s clutches, and it is alleged that it was at that point that the bodyguard starting shooting into the crowd. Eyewitnesses put the blame squarely on Khali’s bodyguard, who some allege had been drinking alcohol. Aaj Tak reports that the normally fearless Khali immediately fled the scene. Ludhiana police are being silent about the matter thus far, and no charges have been laid.

This is the latest black eye for the WWE in terms of its wrestlers public conduct. Most recently, CM Punk was allegedly involved in a violent altercation with fans in Shreveport, Louisiana, one of them a child, and Alex Riley was booked for driving under the influence of alcohol in Florida.