With Legendary, both WWE Studios and John Cena have served notice to Hollywood: it’s time to take them seriously. Seriously. Much as with the current in-ring product that will always be the WWE’s primary focus, the fortunes of Vince McMahon’s long-running foray into the film industry is presently placed on Cena’s shoulders. This has created a symbiotic relationship: as the films improve, so does Cena’s acting; as Cena improves, so do the movies. 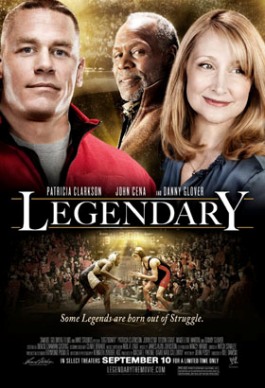 What makes Legendary superior to any prior effort put forth by this team is, in many ways, the result of steady evolution from release to release. The lesson learned from 12 Rounds, for example, is put to use: surround Cena with quality actors and lighten the load for him to carry. Cena is truly a supporting actor in this film, not even making an appearance until just under 20 minutes into the feature. In this capacity, Cena shines.

Finding the right role for any performer, be they a full-time actor or a cross-over celebrity, is what makes or breaks a character. Keanu Reeves found the role he was born for in The Matrix films, while even the great Jack Lemmon looked lost trying his hand at Shakespeare in Kenneth Branagh’s Hamlet.

And yet, Cena’s connection to the character is perhaps not as obvious as it first seems. Yes, he’s playing a wrestler — but that’s not really the point. In truth, as is revealed in the featurettes found on the DVD, Cena had zero experience in amateur wrestling coming into the film.

So, what is Cena’s strategy? It seems clear that this was the perfect story for him to try the always-risky venture into real dramatic territory. Risky, that is, for cross-over stars who typically only have one purpose in films, and one character to play. Tom Jones never ventures beyond playing caricatures of himself in films; neither, to keep it closer to wrestling, has Steve Austin tried stretching beyond his most obvious abilities. And while “John Cena cries!” will hardly have the impact that “Garbo talks!” once had, kudos go to the WWE flag bearer for taking the plunge into an emotionally-charged film.

With all that being said, the film has a certain quality of authenticity to it, giving it the feel of a script that was based on a true story although that claim is never made. The source for that sense of realness had to come from somewhere, of course, if not from Cena, and it all started a long time ago when the screenwriter, John Posey, was wrestling in high school.

“I grew up in Florida, so I knew Gordon Solie, Dusty Rhodes and Ricky Steamboat,” explains Posey, though he admits that by the time Legendary was coming to pass, he was not a follower of professional wrestling at all. Amateur wrestling, though, is in his blood. “I was a high school wrestler, and I’ve coached wrestling,” he recalls. “[Legendary‘s] story came from a time when I pinned a guy who was one of the best wrestlers in the state with a reverse cradle — he’d never been pinned in his life.”

So it was that Posey, later to become an established television actor and screenwriter, started carrying around this idea for an underdog-style script, and one other moment in his life further cemented the structure of the story. “I had a younger brother, who was a 98-pounder, and we got into an altercation in a locker room, and my younger brother broke a bottle and threatened to take on the whole other team,” he recalls with a chuckle. “I realized that I’ve seen a lot of father-son movies, but not a lot of movies about brothers.”

The story of Legendary, true to Posey’s vision, features an undersized teenager named Cal (Graye), who is living with his mother (Clarkson). His father died a long time ago, and the fall-out from that tragedy saw the eldest son of the family, Mike (Cena), distance himself to the point that Cal barely knows him. Mike was a wrestler, as was the father, so Cal sees a chance to try and forge a connection with his estranged brother by trying his hand at the sport. His struggles on the mat echo in his struggles to somehow reunite the family, with a few surprise twists along the way.

The script has gone through the usual Hollywood trials: it was set up at different companies on four different occasions, each time losing steam and coming back to Posey to start his search again for someone to take it to production. Along the way it went through name changes, from the original title “Oxley’s Road” (during which time it made the Hollywood “Black List,” a collection of voted-upon best unproduced scripts available), to the WWE’s choice of Legendary.

WWE Studios initiated the contact with Posey, looking for scripts to bolster their burgeoning library. Posey explains that the mission statement for the company, as explained to him, was to make half a dozen mid-level budget PG-13 films, evenly split between drama and comedy. “All along it was intended to be a small theatrical release and to focus on the DVD,” Posey explains, which is either a favourable spin on the short theatrical run that Legendary had, or an indication of the appropriate goals that WWE Studios is setting for its own films.

Either way, Legendary succeeds in elevating the potential for a WWE Studios production. It may prove to be a blip on the radar, or, looking back, it could be seen as a turning point in the company’s ability to produce quality films that will appeal to more than the built-in WWE fanbase. Posey, for one, is hopeful of the latter, as he is currently working on a biopic of Gorgeous George that, if it builds on the formula proven successful by Legendary, has great potential.

The DVD extras are unfortunately hampered by two things: first is that the disc is clearly a WWE-focused disc with most of the focus being on Cena (when the quality of the film, as noted, was due to the ensemble); and the second problem is that nearly all of them have already been played during a Raw or Smackdown broadcast ahead of the film’s release. Therefore, the double-whammy is that the features are not geared towards non-WWE fans, while the target audience has already seen them anyway.

Nonetheless, enjoy the best that WWE Studios has to offer and give Legendary  a shot.