John Cena, “Dramatic Actor.” It’s got a different ring than “Action Star,” which is what he has been doing in his previous two movies. The film, tentatively titled Legendary, has finished filming in New Orleans now, and will spotlight the WWE star differently.

While in New Orleans for the filming of the film, which started out entitled Brother’s Keeper, Cena chatted with the media, and called the project “a great change of pace.” 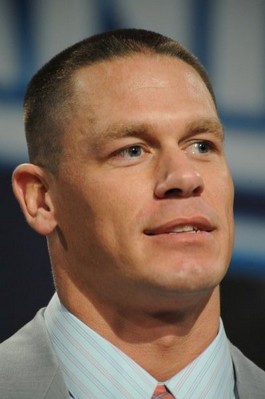 “This one is a lot less physically demanding,” he said. “I feel like I’ve been able to get involved in the story, and it’s an easy story to embrace. I think everybody will be able to pull something from it.”

Legendary centres on Cal Chetley, a socially awkward teenage boy, played by Devon Graye (of Dexter), who tries to reconnect his family after the death of his collegiate wrestling star father by following in his father’s footsteps. It is set in Oklahoma, because of the dedicated fandom for amateur wrestling, said writer and actor John Posey. “It’s a coming-of-age story about how youth teaches adults how to figure things out,” Posey told the Hammond Daily Star.

Actress Patricia Clarkson, who is from New Orleans, plays Sharon Chetley, a mother who is grieving her husband, battling with her estranged son (played by Cena), and her teenager (Graye). Danny Glover is a “traveling angel,” a charming and mysterious man who shows up at paramount times in the life of Graye’s character.

David Calloway, the movie’s producer who is also vice president of WWE Studios, said scoring Clarkson (The Green Mile, Pieces of April, Good Night, and Good Luck) was a coup.

“It speaks to the quality of the story and the screenplay,” Calloway said. “She’s really the consummate actress, and we count ourselves very, very fortunate to have her.”

In a conference call to promote his appearance on the USA Network show Psych, Cena talked about Legendary as well.

“[I]t’s going to pan out to be a really, really good movie. It’s a drama about a young man who uses amateur wrestling as a backdrop to kind of bring a family closer together,” he said.

The amateur wrestling was a little new to him. “Yeah, it’s amateur stuff so it’s a little bit different but it still has an element of pure sport so it’s nice.”

“It’ll be a good watch,” Cena said to AP. “People will walk away from this movie feeling good about themselves.”

The film, directed by Mel Damski (Boston Public, Ally McBeal, The Practice, Chicago Hope and lots of other TV shows), and featuring a budget of about $10-million, is expected to be released theatrically, rather than just straight to DVD.

— with files from Canoe wire services, and Russ Cohen

Greg Oliver has been to New Orleans and has a brother — and once saw Danny Glover’s house while on a tour of San Francisco. Greg can be emailed at [email protected].