MONTREAL – After a tremendous 33-year career, Jacques Rougeau Jr. has decided to step out of the ring and concentrate his efforts on his wrestling school, with a “last chance to see him in action” retirement tour. Although still in tremendous shape, Rougeau feels it is time to pass the torch. 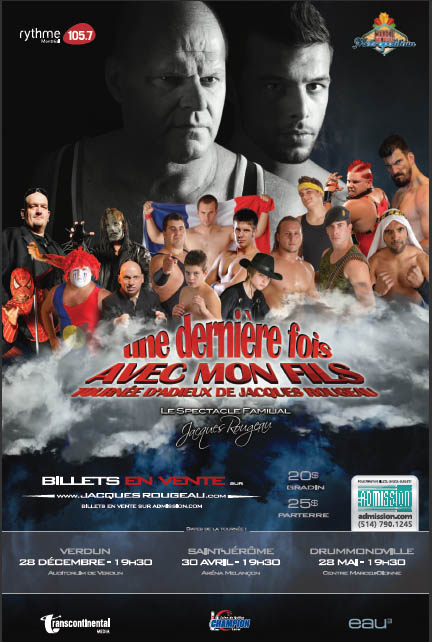 Having won many belts in his career, including being a five-time WWF tag team champion, WWF Intercontinental champion, and International Wrestling champion, Rougeau believes he doesn’t have anything else to prove in the ring.

For now, his enthusiasm comes from teaching the next generation of Quebec-based wrestlers in his wrestling school.

When asked what some of his greatest memories in the world of wrestling, Rougeau, without any hesitation, brings up one match in April 1994: “When I was set to retire from pro wrestling, I had my last match against Hulk Hogan here at the old Montreal Forum, and I won with a small package. I will never be thankful enough to Hulk for this ultimate show of respect.”

Other highlights were his battles against the Garvins and his run as the Mountie in the WWF, as well as teaming up with his brothers Raymond and Armand, and his father Jacques Sr.

The fact he was able to avoid major injuries throughout his career isn’t just luck. “I wasn’t better than anyone else, just more careful,” he theorized.

In recent years, Jacques has also kept very busy within the community by giving speeches at schools about healthy living. He has also been a spokesperson for Big Brother and Big Sisters, and worked with Operation Enfants soleil, the Dreamwish Foundation, SOS Suicide line and many minor hockey and soccer organizations.

A third-generation wrestler, following his great-uncle Eddy Auger, and his father Jacques Sr. and uncle Johnny, Jacques Jr. is very proud that three of his sons are willing and well on their way to pick up fourth generation duty. J.J (21), Cedric (17) and Emile (11) have been wrestling for quite a while, sometimes in the family living room. Cedric now towers over his dad at 6-foot-4, and is a weight room nut — it shows.

Rougeau’s family-oriented shows, inspired by the recently deceased Edouard Carpentier, will continue on with the many, many students in his school. One big-name guest wrestler for the grand finale is former WWF wrestler and movie star (300 and Sherlock Holmes) Kurrgan.

Four shows are scheduled for Rougeau, until he hangs up his boots for good:

You can find all the information you need to know about his retirement tour and his wrestling school at www.jacquesrougeau.com