Rhodes on King Curtis: ‘I would mark out watching him’

“The American Dream” Dusty Rhodes has a message for the late King Curtis Iaukea, who he worked with countless times — “I don’t know if I can get my Walkmans back, but he owes me them.” 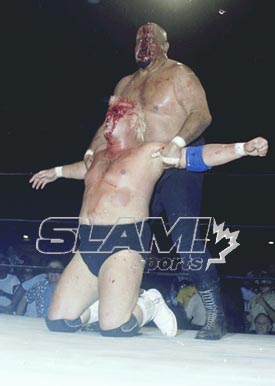 Obviously, it was a relationship that existed outside of the ring, where the The Dream and Da Bull often carved their initials into each other’s foreheads, especially during their brutal battles in Florida.

“I met Curtis for the first time in Australia in ’69 when me and Murdoch had went over there,” Rhodes recalled in an exclusive interview with SLAM! Wrestling. “[Mark] Lewin and Curtis were kind of the big deals in Australia, and Tex McKenzie and them guys. Me and Murdoch were just young pups. I remember meeting him and how gracious he always was around me. His family, me and Michelle, my wife, spent numerous times with him in Hawaii at their home, getting the Christmas card every year, and she kept up.”

Rhodes was not shy talking about Iaukea. But he does want his Walkmans back.

“I loved him. I loved spending time around his family, being in Hawaii and sitting on the beach with him. Every time I go to Japan, I come back and I’d bring a Walkman, they were big. Every time he ended up taking my Walkman, he got a new Walkman,” Rhodes chuckled. “I bought it for myself, and he would take it somehow. It just became a rib between me and him.”

In the arenas, Iaukea was magic.

“He had a magnetism about him. You always hear the word charismatic. He was infectious, his laugh. I loved being around him as much or more than probably anybody in our industry for years. He always treated me well. He loved his pot, and that’s what it was all about!” he laughed.

Iaukea and Rhodes battled during the “heyday” of the American Dream in Florida. “We drew very well with him, in Miami Beach especially, four or five sellouts in a row I was lucky enough to have with him. He would get up on the top rope and he would bellow. He was like a big bull. The big splash off the top. I really had a lot of time for him. I liked him a lot.”

Even though Iaukea had been working since the mid-’60s, Florida promoter Eddie Graham wanted to make sure that he and Rhodes were a good fit before unleashing the mayhem.

“The magnetism he had was unbelievable. I remember in Miami Beach, where Eddie, my mentor, said, ‘I’m going to send Curtis to the ring just to see where he’s at.’ He used to do that a lot. At the end of my match with Lewin and [Kevin] Sullivan, Curtis hit the ring and it was just a standoff. He said, ‘I don’t want any physicality, I just want a standoff. The crowd is going to tell you. They’ll tell you if he’s ready or not for you to work with.’ They wanted me to put my hands on him. There was a moment that we had together that was pretty cool.”

In the ring, Rhodes said that the 6-foot-3, 280-pound Iaukea was the rare breed of big man, like Vader or the One Man Gang, who were really able to move.

“I guess as a younger lad, he was a hell of a football player and a hell of an athlete. He was agile. That era proved financially great for all of us. Myself, mostly, the way I looked and the agility I had at my size, he was probably even more agile than I was for the size that he was,” Rhodes said.

Now involved in training at the WWE’s facility in Florida, Rhodes thinks King Curtis would still have been a star today. “We hear everyone talking about the different eras, but what we see now, there’s still room for that type of character that he was. I think he would transcend what we see now. He was the best talker in the business, in his genre. In his genre as a heel, he was, I think, if you go back and look at guys that drew money, and drew money with their mouths also, putting them in the building, we take the Superstars, guys like myself, and the Curtises. They were infectious. You believed them. You believed him. That’s why they used him in WCW, I think Kevin [Sullivan] used him towards the end. He was amazing. I would mark out watching him and listening to him talk about me. It was an amazing moment.”

In 2006, Iaukea told this writer the story of his last match. He’d gotten a blood infection while in Singapore, and eventually made it back to Florida, where he made his final in-ring appearance. “The night before I was supposed to go back to Tokyo, nine months after they told me what I had, I passed out in the ring with Dusty Rhodes in Miami Convention Hall.”

Rhodes told his side. “I remember it. I remember that he was going back to Hawaii, and Lewin, the Purple Haze, was going to stay. They always went together as a package, from Australia to wherever, they were a package deal. But Sullivan came into play, and with Lewin, the two greatest, from the old movie, and I say this with all due respect, and tongue in cheek, but the two greatest flim-flam men in our business were Gary Hart, who I loved dearly, and Mark Lewin. Curtis was drawn in, and this was the only time Lewin didn’t go with him because he was getting ready to have a run with me, Florida was hot, Barry Windham was hot, and other guys were hot, Sullivan. He left. He was very ill during that time, very sick. I thought that he had died when he got back to Hawaii.”

“Most of it, as you know, is horseshit. King Curtis was not. He was the real deal. As a young lad, I was awed by him. I loved to hear him talk. And the thing that I remember most of all about him is he lit the room up. When I walked into a room, no matter how bad I was, and he opened his mouth, he brought joy and laughter and smiles to my heart and face at a time when the industry was a lot different. I hope he rests in peace.”