At most Ring of Honor shows, there is a pre-show match which acts as a tryout of sorts for up-and-coming talent that wants to move up the wrestling ladder. In Mississauga, Ontario, recently, one of those looking to be seen drove 24 hours from Winnipeg just for the opportunity.

For Danny Duggan, an eight-year veteran at just 23 years old, it was his second chance to perform for ROH.

“I did one back in March and I was a little nervous then. I’m really confident going into this one,” he told SLAM! Wrestling, before teaming with CAM!!ikaze, from Alberta, to defeat Toronto-based indy workers Rip Impact and Ashley Sixx. 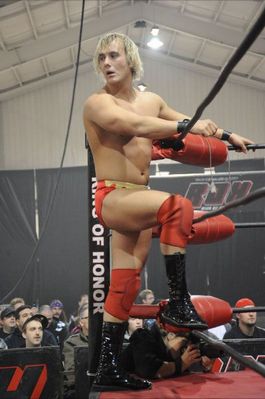 Danny Duggan on the ring apron during his Ring of Honor match in Mississauga, Ontario, on November 13, 2010. Photo by Mike Mastrandrea

As well, Duggan just returned from his first tour of Japan for Smash, and recently was an extra for WWE.

“A lot of opportunities have been coming, so I’m very confident that my work is at the best of its abilities right now,” he said.

The 5-foot-11, 191-pound Duggan is definitely an optimist. “You’ve always got to keep trying, that’s always the case. You’re going to get a hundred opportunities along the way, and you’ve got to try to make every one of them count. Sometimes you won’t be what they’re looking for that night. You’ve got to come back, go back to the drawing board, and come back again.”

Back in Winnipeg, Duggan has seen a lot of ups and downs over the years as promotions have come and gone.

At the moment, he is running his own promotion. “Things are a lot more peaceful there than they used to be. I run Canadian Wrestling’s Elite back in Winnipeg, and we’ve done a really good job of building that market, bringing the boys together for a positive cause. Everyone seems to be doing really well.”

As a promoter, he admits to picking wrestlers to come in and tour for his shows that might help him down the road, whether with contacts or advice. Consider the wide-ranging list from the CWE’s international roster: Val Venis, Tyler Black, Bushwacker Luke Williams, Petey Williams and Demolition Smash.

“That’s one of the reasons we started Canadian Wrestling’s Elite back in Winnipeg. Geographically, we’re in the middle of nowhere when it comes to the world of wrestling,” Duggan said. “So we knew if guys wanted to get out, they’d have to meet guys from elsewhere, so that’s when we started bringing guys in with the hopes that they can network and make some contacts and get out of town a little bit. It seems to be working.”

From a promoting perspective, as well as from a wrestling viewpoint, he has learned a lot and tried to listen.

“I’ve had a great opportunity along the way growing up to work with a lot of veterans of Canadian wrestling that I always picked their brains from. We’ve had a lot of good imports, whether it be from internationally or former WWE stars or things of that nature, a lot of guys from Ring of Honor have come our way. I always try to sit down and pick their brain and try to get as much knowledge out of them as possible. It’s been a stew of everybody that’s kind of given me what I’ve got today.”

Duggan was trained by “Hotshot” Johnny Devine and “Tomahawk” Gene Swan. Devine speaks highly of him.

“Danny is a student of the game with limitless potential, as long as he keeps his perspective. He was a sponge and soaked knowledge like water. Danny got started young, very young for the wrestling business at, I believe, 15 or 16, and made some mistakes along the way,” said Devine. “But like a true man he has acknowledged his mistakes and worked to correct them and gone on to run his own company and really do well for himself. He worked hard in the gym and in ring and is now reaping the benefits. People are starting to take notice and it was only a matter of time.

“Danny can go as far in the business as he wants. WWE, TNA, ROH, they are definitely going to want a guy like Danny down the road as he has that drive and hunger to succeed that you need to make it. and he is learning what it takes to compete at the top levels. He has already crossed one pond for Japan and will be traveling more and more as his reputation grows. As long as he keeps his head on straight and surrounds himself with the right people you will more than likely be watching him on TV before too long.