The Professional Wrestling Hall of Fame Class of 2011 features former world champions, wild men, the toughest tag team of all time, a feared shooter, a King, and, perhaps the most polarizing man in pro wrestling history.

It’s the tenth class for the PWHF, which is located in downtown Amsterdam, New York, just off the Interstate highway.

Word of the success of the PWHF has been spreading, but apparently hadn’t reached the Russian Steppes.

Ivan Koloff, a Canadian turned Russian villain now living in North Carolina, is entering the PWHF in the Modern Era category, alongside Jerry “The King” Lawler. But the former WWWF World champion was surprised to hear about the honour.

“This is the first I’ve heard about it. I wasn’t sure if you meant Vince’s Hall of Fame or …”

With a grass-roots campaign to have Koloff celebrated at WrestleMania 27 in Atlanta and the WWE’s Hall of Fame, it’s not a surprising mistake. Compound that with the fact that Vincent K. McMahon — Mr. McMahon on the screen — joins his father, Vincent J. McMahon, in the PWHF in the Colleague category.

“It’s nice that people recognize you and look at it as an accomplishment,” Koloff said of his career. He still dons the tights on occasion, “which I probably shouldn’t be, given my injuries and all that.”

In the Tag Team category, the Road Warriors, with manager Paul Ellering, are being inducted. The Warriors, Hawk (Michael Hegstrand) and Animal (Joe Laurinaitas) were formed in 1983 and quickly dominated the tag team world, no matter the promotion. 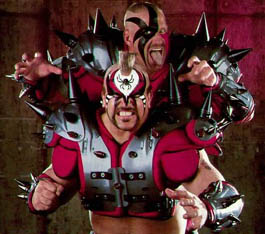 “Still to this day people want to see good guy, bad guy, and they want to see heroes. It was definitely revolutionary,” said Road Warrior Animal in The Pro Wrestling Hall of Fame: The Tag Teams. “You had Hogan in the one area and Hawk and I in the other area, and we changed the face of, definitely, tag team wrestling and of wrestling, period.”

The TV Era entrants — The Sheik (Ed Farhat) and Dick the Bruiser (Dick Afflis) spanned far more eras than just that one, and created more unpredictable havoc than perhaps any other two wrestlers in history. 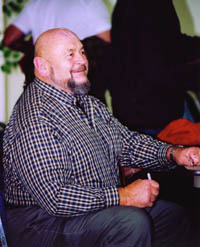 Besides owning a major part of the Indianapolis promotion, Dick the Bruiser was a headliner all over the world. Bruiser often teamed with The Crusher, and was known for his sculpted physique and gravely voice. “Most guys don’t think it’s for real, but it is,” he told SPORT Magazine in 1964. “A lot of them bums, wrestlers, that is, try to copy me. They think I got a perfect voice for a wrestler.” He died in 1991.

The Sheik, who died in 2002, has long been considered one of the greatest heels in wrestling history. On top of that, he ran the Detroit promotion as well.

Yet it took him 10 years to be inducted. One of the principal men campaigning for his induction was one of his former managers, Dave “Supermouth” Drason (Dave Burzynski).

“I’m thrilled beyond belief. I’ve been on a mission for a number of years now, planting that seed to my peers who I share the annual vote with, to get The Sheik into the hall. At times I thought that others who were less deserving were preceding him into the hall, which I saw as an unfair justice,” said Burzynski. “But I guess you can say, better late than never. Without question, he was the greatest villain of all time, one of the biggest gates draws around the world in the history of pro wrestling, a clever promoter who treated his fan base with the best wrestling talent from around the country, and if you were lucky enough to be among his circle of friends, one of the most generous people you’d ever want to know.

“On a personal note, to have had the chance to have been his manager, with the likes of Abdullah Farouk and Eddie Creatchman, I feel like part of myself is going into the hall with him. I’m sure he is doing a little strut, looking up into the sky, pointing to the wrestling gods and saying, ‘Adalathoo, yea.'”

Judy Grable (Nellya Burres-Baughman), who died in 2008, is entering in the Ladies category. The native of Washington State wrestled from 1938 to 1956, and was one of the most beautiful women of her era. 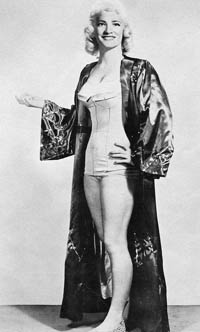 British shooter and technician Billy Robinson enters the PWHF in the International category. Already a member of the George Tragos/Lou Thesz Professional Wrestling Hall of Fame in Waterloo, Iowa, Robinson will be traveling in from Arkansas for the induction ceremony.

Colleagues still won’t want to test him. “If I were to say the toughest guy in the world, let’s go back in time, I don’t know what Billy’s like now, but I don’t think there was anybody in the whole world that could beat this guy. This guy was tough,” said Jerry Christy.

Bronislau “Bronko” Nagurski was born in 1908 in the small border town of Rainy River, Ontario, and became a gridiron star at the University of Minnesota from 1927 to 1929, and was the only player in U.S. college history to make all-star at two positions — fullback and tackle. In 1930, he was signed by George Halas to the Chicago Bears, and helped them to championships in 1932 and 1933. “The Bronk” first tried wrestling in 1933 after football season ended. As a grappler, Nagurski hit his peak during the late ’30s, early ’40s, when he held the NWA World title twice, beating Lou Thesz June 23, 1939 for his first win. Nagurski would lose the title to Ray Steele March 7, 1940, and regain it from Steele a year later on March 11, 1941. Sandor Szabo finally took the gold from Nagurksi on June 5, 1941. He died January 8, 1990.

A Colorado native, Everette Marshall wrestled amateur at the University of Iowa and the University of Denver, before turning pro in 1929 — and immediately was thrust to the top of the cards. He was a world title claimant in the mixed-up middle 1930s. By 1940, he had retired to work on his family farm — a brief comeback in 1946-47 notwithstanding. Marshall died in 1973.

The tenth PWHF Induction Weekend will take place on May 20-21, 2011, in Amsterdam, NY. Ticket information and other details will be released soon.