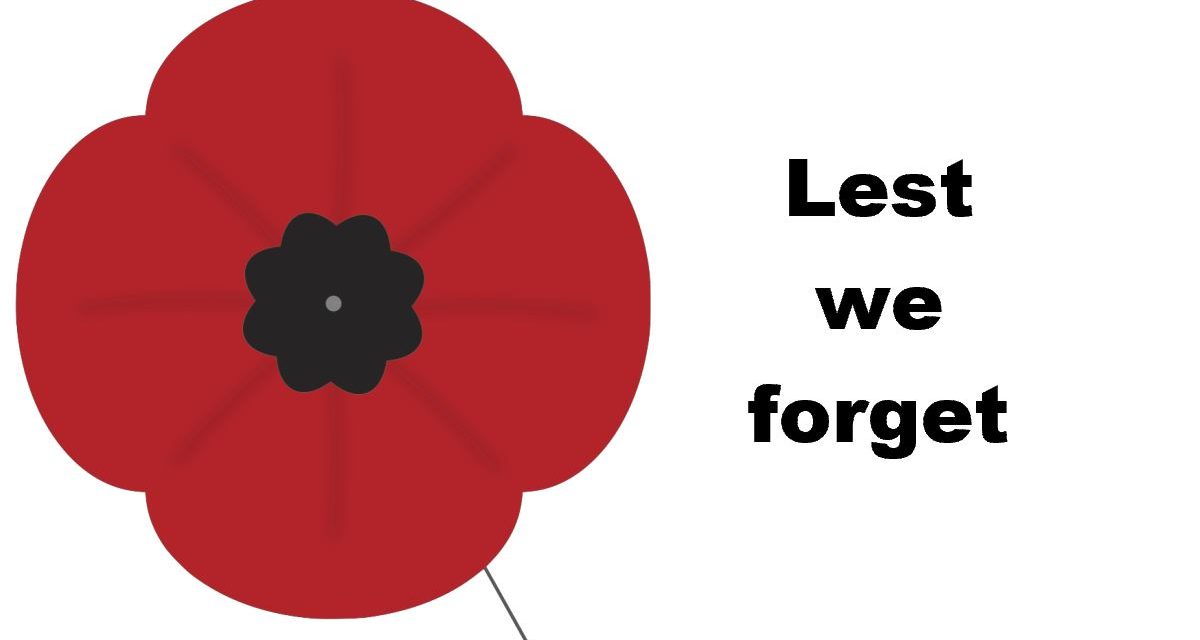 With the eleventh hour of the eleventh day of the eleventh month once again upon us, we take time to reflect on the sacrifice of Marine Lt. Steven H. Opalenik and the millions of others who served their countries during wartime.

During World War II, wrestlers served their country just as any other regular folks did, both at home in the factories and abroad in the action. And, just as some of the sons of farmers and carpenters didn’t come back, neither did Marine Lt. Steven H. Opalenik, who had carved out a decent career as Steve Brody, a championship junior heavyweight.

Opalenik lost his life to Japanese mortar shell fire in Iwo Jima. According to the press release sent out by the American forces, Opalenik “was directing fire for a mortar platoon when he was killed. He and his men were attempting to drive the Japs from numerous caves and cement pillboxes. But before he died, Opalenik saw that his men were protected from a Jap barrage which struck them suddenly.”

The website for the Able Company, 24th Marines, is a little more detailed, and reports that Opalenik “was hit in the head and heart by small pieces of an exploding shell” on February 22, 1945, and that he was buried in Plot 1, Row 4, Grave 173 of the 4th Marine Division cemetery on February 26, 1945.

The battle of Iwo Jima, which ran from February 19, 1945, to March 26, 1945, is one of the most famous in the Second World War, in part because of the iconic image of the American soldiers lifting the flag on the small island in the Pacific.

As Steve Brody, perhaps Opalenik was on the way to further fame as well. He’d already done well in his wrestling career. 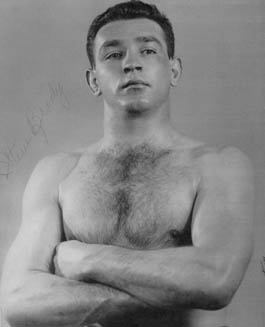 A native of South Hadley, Massachusetts, Opalenik, who was born August 11, 1916, got into wrestling when he was about 20 years old, working around New England as Steve Brady.

When he transferred to the Midwest, working in cities such as Kansas City, St. Joseph, and Wichita, he switched to Steve Brody, “the fast-moving Boston grappler.”

He was successful, but not a transcendental star known across the country.

“Brooklyn Steve Brody is a nice young chap. He’s well built, has wavy black hair and it’s a good bet he treats his mother nice. But he doesn’t belong in the same ring with gnarled John Pesek,” writes Hollis Limprecht in the Nebraska State Journal in April 1941. “Don’t get the idea Brody is a pushover. He’s a clean wrestler, frowning on modern meanyisms, and belongs on some main events — but not with John Pesek.”

In Missouri in 1941, Brody was decidedly a heel. “Steve Brody, rough and tough wrestler who caused a near riot by his tactics at the last fight card here, will return to the local ring Thursday night,” warned the Moberly Monitor-Index, explaining that he had fought with Prospector Pete. “The crowd staged the real entertainment when a dozen or more spectators chased Brody back into the ring and a near free-for-all seemed inevitable for a few minutes. But the crowd liked it, and that’s one of the reasons Brody is coming back this week, according to Clem Raymond, local manager of the benefit bouts.”

In the Midwest, he was often billed as a champion of the smaller weights and is listed at anywhere from 192 to 212 pounds in the clippings. “Brody gained his junior heavyweight title after starting out as an amateur in New York and has had the luck of the Irish ever since. He was a featured performer in Detroit and Kansas City and is a firm fan favorite in many wrestling centers,” reads a 1940 report in the Emporia (Kansas) Gazette.

Over time. Brody became well known and admired to the locals in the Midwest.

“‘Steve Brodie’ is well known to Emporia wrestling fans. He appeared here many time on wrestling programs, and was one of the most popular mat artists ever to wrestle here,” the Emporia newspaper reported after Opalenik’s death.

Fans kept in touch with him throughout the war, according to a story in the St. Joseph News Press in July 1944. In the article, Brody has been injured “according to word received by Mr. and Mrs. J S Bucher, 305 North Fifteenth street, mat fans and close personal friends of the grappler.”

“I wasn’t quite so lucky this time, Brody wrote the Buchers from a naval hospital in the Pacific under a July 18 postmark.

He was referring to an incident which occurred in June, when a Jap hand grenade landed in a foxhole sheltering Brody and three marine buddies. The other men were killed, but Brody was uninjured.

Brody, one of the most popular men ever to wrestle in St. Joseph, was an instructor in hand to hand combat at a West Coast training station before being sent overseas.”

According to historian J Michael Kenyon, “he appears to have gone back to New England to join the service in May 1942, appearing on a few cards (with Wild Bull Curry, among others). The only other wrestling action thereafter, that I have record of, appears to have been a few bouts he had while, as a sergeant, on leave in September 1943.” 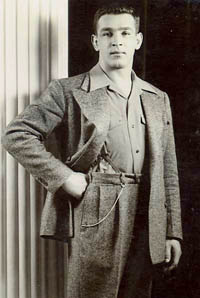 In the service, Opalenik’s previous profession got him some press.

The story details Opalenik’s role in the U.S. Marines’ assault on Namur, in the battle for Kwajalein.

“Bob Sherrod, author of the stirring ‘Tarawa,’ sends me an account of Steve’s Namur adventure, as published in the Marines’ South Pacific newspaper, the Sun-Setter. Steve’s ambition en route to Namur was (and still is) to meet a Jap hand to hand. All he wanted was to get a ‘holt’ on one. He believes that any good rassler can beat the best jiu-jitsu expert the Japs own. He orated to his buddies at great length on this premise, as the ship sailed on. He even waged pantomime battles with an imaginary Jap, and what he did to the invisible bum would have had Brig. Gen. John J. Phelan down on his neck with a thunderous bawling out, in double talk, if same had happened in a New York ring.

Steve even showed the Marines his ‘flying drop kick’ — and what it did to a peace-time buddy named the ‘Swedish Angel,’ Jack Pfefer’s answer to the Neanderthal man.

Then came Namur and — to his great disgust — Steve had to do all of his battling with a gun and a pocketful of hand grenades. It is just as well, for the sake of Steve and his people in South Hadley, Mass. Steve would have been sorely perforated if he had tried to demonstrate his thesis that a growler can always beat a slant-eyed twirler.

The first night on Namur, Steve and three buddies lay in a foxhole while Jap snipers plugged away so hard at the lip of their little haven that ‘I thought a guy was outside shoveling sand down on us,’ Steve later related. Just before dawn a desperate Jap crawled up to the lip of the hole and tossed in a hand grenade. It killed Steve’s three buddies, didn’t even scratch the rassler.

Later in the fight, Steve and another buddy were trapped in the open by the Japs. They dived behind the protective cover of a stalled Jap automobile. A mortar shell hit the car and blew it up — in the direction of Steve’s buddy. The buddy was critically wounded. But Steve, unscratched once again, got him out of there.”

For his efforts at war on Saipan, personally rescuing wounded Americans from behind Japanese lines, Opalenik was awarded a Silver Star for his bravery.

After the war, his body was returned to South Hadley, Mass., where he lies in Notre Dame Cemetery.