Christopher Daniels was one of Ring of Honor’s “founding fathers,” wrestling in the main event of the companies’ first ever show, The Era of Honor Begins, on February 23, 2002. 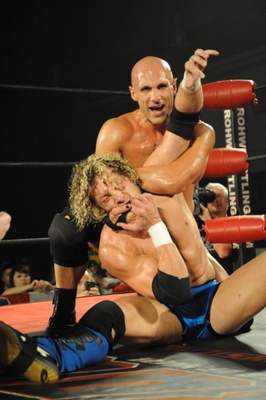 Christopher Daniels controls Kenny Omega at a Ring of Honor show in Toronto in June 2010. Photo by Mike Mastrandrea

Then earlier this year, he made his triumphant return to ROH after being released from TNA. The 39-year-old Daniels is happy to be back in familiar surroundings.

“Obviously I feel like [TNA] made the wrong decision to let me go,” Daniels told SLAM! Wrestling. “They have a roster of 40-50 guys and in the end they have to do the best with what they’ve got. I feel like I could have contributed a little more than what I did in the last few months.

“I didn’t think I was gonna go back to Ring of Honor, but it’s been a great transition. My release from TNA was a negative but I have turned it into a positive. I’m happy to be at ROH, it’s a great locker room to be in and there are a lot of new faces, so there are many fresh matchups for me to have.

“I’m having a lot of fun; I’ve known a lot of the office guys and [owner] Cary (Silkin) a long time so they just open their doors to me when I arrived. I haven’t looked back since.”

With his release from TNA confirmed, Daniels spoke to Jim Cornette at length about going back to ROH. Cornette laid out ideas of what he would like to see done with Daniels if he were to re-join the company. Liking the ideas that Cornette had, plans were quickly worked out for him to re-start with the Pennsylvania based group.

It was at the Big Bang PPV, on April 3rd, that Daniels made his long-awaited return against Davey Richards, a man who he believes could be the next major star for the company.

“He is right now being touted as one of the best in the world and for good reason,” Daniels said of Richards. “He has been one of the biggest stars for the last couple of months and could be the main guy soon.”

Daniels points out that while he may not have appeared for ROH since 2007, there haven’t been many major changes to the company.

“It’s just a matter of the talent in the locker room changing,” said Daniels. “One of the things I have always credited those guys in the ROH locker room is that they are among the hungriest wrestlers in the world.

“A lot of times, ROH is the first opportunity on a major stage that a lot of these guys get and they are looking to make a name for themselves and looking to break out of the pack. With that kind of atmosphere in the locker room it can only be good for the company.

“Over the past couple of years Bryan Danielson and Nigel McGuinness left a void at the top and we saw Tyler Black in particular step up to fill it. Now that Black has left there are a ton of guys who I’m sure are striving to take that void.”

Due to his name already being established, Daniels feels that since his return he has a duty to help elevate talent within the company.

“For me to get in the ring with guys that are a lot younger than me and haven’t had the experience I’ve had is great, It fuels me to try and stay ahead of the curve in terms of the wrestling scene and to work good matches with them inspires me.

“I am looking at it as a challenge to stay ahead of these young, athletic guys.”

Daniels believes that he has wrestled some of the best matches in his career this year pointing out the match he had with Richards in Chicago last month and the recent clashes he has had with Roderick Strong.

“I will bring that title home on November 13th; I am poised to take it,” vowed Daniels. “I am looking forward to being ROH Champion. After eight years of association with the company since it started I have never really had the opportunity to win that title.

“No disrespect to Strong, because I think he has turned a corner as far as his talent goes, and becoming ROH Champion means he is working at another level right now. But this is another instance of me trying to match up with somebody who has got momentum behind them and it’s going to be a challenge for me, it is going to be a big deal and a great match.”

Daniels, who resides in Kalamazoo, Michigan, is also looking forward to performing in Canada again and recalls the last time he wrestled there.

“We did the Death Before Dishonor PPV at the Ted Reeve Arena in Ontario and the place was electric. I wrestled Kenny Omega with no issue, it was just a matter of competition to see who the better man was and the crowd ate it up.”

“I think Canadian wrestling fans are great. Going into this match with Strong for all the marbles, I think the crowd is going to be really amped up and I cannot wait to be out there in front of them.”