Nikita, bad girl Russian, a young up and comer on Ontario scene

Moving to a foreign country is never easy. The food is different; the language is different; the people are different. But in life, certain opportunities cannot be passed up. And when opportunity knocked on the door of Jane Miroshnykova, she was more than happy to answer the call.

The Ukraine-born Miroshnykova fell in love with professional wrestling almost immediately after her family moved to Canada, settling in a Toronto suburb. 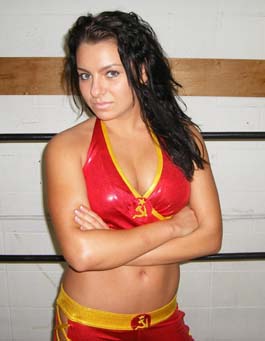 “I was about eight years old at the time and I walked in on my dad, who was watching wrestling on TV,” Miroshnykova said. “He invited me to come and watch it with him and I wasn’t really interested, but I didn’t want to say no, because it’s my dad and I also wanted to spend some time with him. But the more I watched, the more interested I became. I was hooked.”

Miroshnykova was a fan during the attitude era, which may come as a surprise, since she was still a kid at a time that wrestling wasn’t so “PG.” But by then, it would take a lot more than a nudge to steer her away from it.

“I think The Rock was the one person who really got me interested in wrestling. I was a big fan of Chris Jericho as well, and some of the women like Trish Stratus and Gail Kim also, and I really aspired to do what they do,” Miroshnykova said. “By the time I was 17, I really started taking it seriously and the more I watched, the more I knew I could do it. So I started looking up different wrestling schools close by.”

Eventually, Miroshnykova came in contact with the current promoter of Maximum Pro Wrestling, Arda Ocal, who was more than willing to lend a helping hand. He turned Miroshnykova in the direction of Squared Circle training and sooner than later, Nikita was born.

“Jane and I apparently went to the same high school. Obviously she was a few years after me. But she found my contact and told me that she wanted to start learning to wrestle. I told her if she’s willing to work hard and put in some effort and listen, then Squared Circle is the place to go,” Ocal said. “There isn’t a huge influx of female wrestlers in the industry. A lot of the major promotions look for more of the model-type divas. But the indy promotions don’t look for the same thing. We look for more people that have a passion for wrestling and I could tell that she did. So if she keeps doing what she’s doing, she could be somebody one day.”

When she got to Squared Circle, Miroshnykova was a little intimidated, because she had no idea what to expect and also, because at 5’2″ she was one of the smallest wrestlers there. But she never let intimidation get the best of her and by the time she got in the ring, she got the fear out of her eyes and it was go time.

“I was 17 and a half when I started training. We started with some basic stuff and it was scary at first,” Miroshnykova said. “But I think I picked it up very quickly.”

Even her trainer Rob Fuego was amazed at how quickly Miroshnykova was learning.

“I was impressed with her hard work and good attitude,” Fuego said. “She never missed a class, even though it took her two hours to get to the gym by bus. She did every drill, bump, move and takedown.”

As a promoter, Ocal knows that the wrestling business is a constant learning experience. He says the only way that Miroshnykova can get better is by learning everything she can and the best way to learn is by actually doing it in the ring. He says Squared Circle was the first step.

“Wrestling goes in cycles, so even though right now, the WWE might not be looking for a smaller girl, that may not always be the case,” Ocal said. “The business is always changing and the best way for Jane to improve her skills is for her to keep going to the gym and keep training and when she goes to other cities across the country, she will be able to apply the skills and knowledge that she picked up at Squared Circle. As much as Rob Fuego doesn’t understand the English language, he is one of the top trainers and very accomplished at what he does and is great at teaching different styles to his students.” 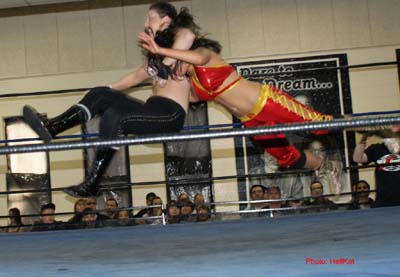 Nikita is bulldogged. Photo by HellKat.

Proper training is definitely an important ingredient to advance from good to great. But just as important is character. It’s no secret that the wrestling business has always been high on anything that’s different. So the language barrier that once may have been a disadvantage for Miroshnykova’s family would soon become a major advantage in the ring.

“Ever since I was younger, I saw that there were a lot of people who played Russians, Iranians, etc. I swore to myself that I would never tell anyone of my heritage and that I speak fluent Russian, because I was scared that my gimmick would end up being a Russian,” Miroshnykova said. “Funny enough, at some point during my training, Rob decided that it would be fun to have me as a Russian and team with a Russian who had already made his debut. Despite the fact that I never wanted to do that gimmick when I was younger, I actually really love the idea now. I think that evil Russians were always played by males and it’s cool to have a female do it. Speaking Russian fluently also helps, because that’s the main thing that separates me from the rest. I speak no English once I’m in the ring.”

After Squared Circle, she went to work for Ocal’s Maximum Pro Wrestling organization, where she adopted the ring name Nikita and utilized her Russian background expertly. Not only was Miroshnykova born in another country, but she is also bilingual, which is not very common, but Ocal says it may be her biggest strength.

“She plays this character Nikita, who’s from Siberia and speaks the language,” Ocal said. “In that role, she is able to generate a lot of heat. Right now, she’s a manager for another Russian character named Boris Brezhnev and they work very well together. She’s done a great job of helping Boris get heat.” 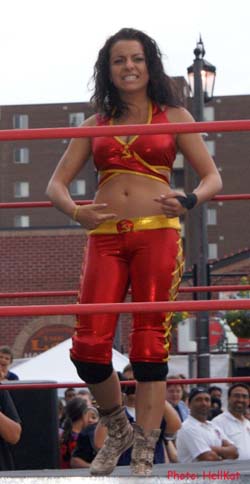 It was this character that also immediately caught the attention of Fuego, whose eyes lit up when he heard Miroshnykova deliver a promo as Nikita.

“I knew she was ready when I asked her to do an interview in front of a camera, and without any coaching, she did really well,” Fuego said. “She did the promo in Russian and it told me that she had been working on her promo skills at home. By then, she had been doing matches in class on a regular basis, so it was time to get her in front of a crowd.”

Fast forward to the present day and Nikita still has a long road to travel. While she is getting better every day, she is only 19 and anyone who knows her would say she has a great future lined up. During the day, Jane Miroshnykova works as a server in a restaurant. But at night, the only things being served are plates and plates of chops by the vicious hands of Nikita.

“Wrestling is full of all different shapes and sizes. I’m a small girl, but I have the ability to work the fast-paced, Lucha style matches,” Miroshnykova said. “My training has put me at a huge advantage and I’m excited to be part of this business. I highly recommend to any aspiring wrestler out there to continue their education and go to post secondary. Education is really important and it’s always great to have a back up. I am currently at Sheridan College, studying Early Childhood Education and am aspiring to become an elementary school teacher.”