Actress Melora Hardin, perhaps most recognized for her role as Jan Levinson on the Emmy-winning comedy series The Office, has worked with some big stars over the years. 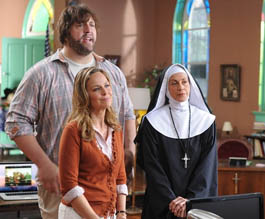 The Big Show with Melora Hardin and Wendie Malick in Knucklehead.

But none bigger, at least in the physical sense, than the Big Show. In her new movie, Knucklehead, Hardin co-stars alongside the 450-pound seven-footer of WWE fame.

“It’s a family comedy and kind of a fish-out-of-water story about a big guy named Walter who was raised in an orphanage, played by Big Show,” Melora Hardin told SLAM! Wrestling from her home in Los Angeles.

“In the movie, Walter never got adopted and is still there in the orphanage, wreaking havoc and creating a bit of a disaster,” Hardin added with a laugh. “And then there’s me. I work at the orphanage where (actress) Wendie Malick is the head nun. I work under her and help her, and then there’s the character of Eddie Sullivan who is played by Mark Feuerstein. He’s a fight manager who is down on his luck and looking for a sign. And then he gets a sign when Big Show’s character falls through a window and virtually right onto his lap. Eddie decides this is the sign that’s going to get him out of his bad luck and promises to take Walter, Big Show’s character, out of his bad luck situation. We’re all sent on a road trip, and I’m sent along to chaperone Walter, protecting him and Eddie along the way.”

It was an adventure, Hardin said, both on and off the set as she found herself at a live wrestling event this August at the Staples Centre in Los Angeles. “I had never seen any wrestling before and then we all went to SummerSlam to see what the Big Show does,” said Hardin, who had box seats. “I thought it was fun and really entertaining. Those guys work really hard, are giving everything they have to the moment, and making a great show out of it. Everyone in the audience was having such a great time, especially all the kids.”

Hardin was just a kid when she started acting, appearing in dozens of shows including Diff’rent Strokes, Little House on the Prairie, Love Boat, and many others. She is also a classically trained dancer and recording artist, having released three successful albums of sensual and soulful music, available through her website, Melora.com.

But even with 30 years in the business, Hardin said meeting the Big Show for the first time was an experience like no other. “I shook his hand and my hand felt like a little kid’s hand,” Hardin said with a laugh.

“When they offered me the part, I liked the script right away, and said that for me, it really depends on who you get to play Eddie Sullivan, and who you get as the big guy — because that could really mess up the movie,” Hardin explained of her initial reaction to the part. “So when I heard that Mark Feuerstein and Big Show were on board, I was really curious to meet Big Show and see what he was like.

“And when I met him, right away I could see that he was very respectful and had good manners, and I thought, ‘Oh, he’s gonna be great!’

“Big Show was just very warm and I had a great time working with him. We had a really fun time in New Orleans, which is where we were filming the movie. Mark and me would go into Big Show’s trailer a lot and watch movies, and catch up on (the TV series) Mad Men. He was very accessible and he wasn’t guarded — you know how sometimes people can be guarded? Big Show wasn’t like that at all.”

Hardin would know, as she has seen her share of Hollywood movie sets, acting in numerous films over the years, including the 2006 Golden Globe-winning, Thank You for Not Smoking. “I’ve done lots of big movies,” said Hardin. “I did 17 Again, and the Hanna Montana movie, and every set has its own personality depending on who the producers and stars are, who the director is, and if you’ve got a screamer — somebody who is a diva.

“And when you’ve got a diva, it can be like walking on egg shells, trying to maneuver around. But (Knucklehead) was really a set that was just so much fun, and Big Show was so nice and friendly.”

Hardin concluded, “Big Show is a hard-working guy and not a diva at all. He’s huge obviously, and just a very sweet guy.”