“People praised Robert De Niro for his dedication when he gained 150 pounds to become Jake La Motta in Raging Bull. How come the same compliment isn’t paid to pro wrestlers who bleed in the name of realism?”
– Bret Hart

Professional wrestling is a sport that is often misunderstood by large amounts of people, seeing wrestling as nothing more than a fake sport which they look down upon. Ridicule is something that the business has had to endure for years even though the majority that poke fun know next to nothing about it. 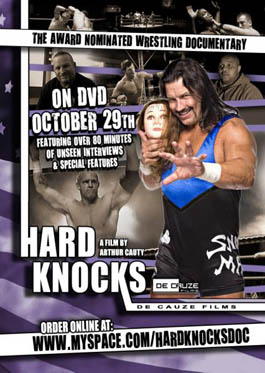 But a 23-year-old filmmaker is attempting to change those perceptions with his documentary Hard Knocks, a 40-minute film that aims to show the passion and desire of the men and women who put their body on the line every time they enter the squared circle.

“I want to capture the artistry and admirableness that has captivated so many fans,” said Arthur Cauty, who hails from Newton Abbot in the United Kingdom. “I’m not saying I want people to watch my film and instantly become fans of wrestling, I would just like them to come away with a better understanding of what wrestling is and to respect it.

“I think I have managed to achieve that, People have spoken to me after watching saying it has completely changed the way they see the business, which is the reaction I was looking for.”

Immersing himself in art and film from a young age, Cauty went on to study media, film and art at college. Since then he has embarked on a career as a freelance cinematographer and video editor which has seen him work for British professional wrestling promotion Varsity Pro Wrestling, directing and filming the company’s live shows for DVD.

This film marks Cauty’s directorial debut and has established him as one of the UK’s most promising young prospects in documentary filmmaking. He recently appeared on the major UK television network the BBC as part of their “Spotlight” program where he was referred to as “One of the South West’s most talented young filmmakers.”

Hard Knocks comes hot on the heels of applauded 2008 feature film The Wrestler, which was the first mainstream movie to approach the sport in a non-farcical way.

“Countless films over the years have been made about boxers and other athletes, The Wrestler was the first drama to approach the sport seriously; there are people I know personally who have come away from that film with a deeper respect for the sport.

“But as you will see in Hard Knocks, there are still people who are willing to shoot it down.”

Professional wrestling has and will forever bridge the gap between reality and fiction, with fans of the industry never quite knowing where the line is drawn.

“I guess the reason why wrestling is badly misunderstood is because on the one hand people are being told ‘it’s a sport’ then on the other that it’s ‘entertainment’ and ‘predetermined.’ People just don’t know how to approach it is it real or fake?

“It’s both,” explained Cauty. “Wrestling is a sport, but it’s non-competitive, it’s a performance. Similarly when you watch a film, watching wrestling is all about suspending your disbelief. Nobody ever complains that films are fake.”

Whilst filming Hard Knocks, Cauty recognized that he needed a wide range of wrestling personalities to include, in order to paint a full picture.

The film includes interviews with some of the most famous names in wrestling such as Al Snow, CM Punk and Mick Foley to name a few but Cauty wanted to include stars from the UK wrestling scene in order to give a varied view.

So the likes of Alex Shane (one of the most best-known names in the UK), The UK Kid (who was trained by Shawn Michaels in Texas), and Andy Simmonz (who has appeared numerous times on WWE Raw and SmackDown in the UK) are also represented.

“I could have easily focused on just WWE stars for example, but that’s only a small part of the picture. There’s a lot more to wrestling than that.”

Last year saw Hard Knocks screened across the UK, Europe and the USA, the film was also nominated for best documentary in 2009 at the Norwich Film Festival.

Cauty has high hopes that his film can enjoy even more success in the coming months.

“The film has been received really well. There has been a lot of interest in me doing another wrestling movie, which is a possibility somewhere down the line.

“With filmmaking what matters is the story and how you tell it, it’s all about how you translate your vision to the screen. What I plan to do with all my films is just tell good stories.”

Hard Knocks will be released to the public on Friday, October 29th and will be available to purchase through the official Hard Knocks Myspace and Facebook pages.

The DVD will feature over 80 minutes of unseen interviews, deleted scenes and special features, with stars from WWE, TNA and the independent circuit featured.

The film is also set to be available through Amazon, and a number of Video on Demand services, which will be announced in the coming weeks.