Weighing in at three discs, Highest Flyers looks at the 20 best aerial experts in North American wrestling (well, minus TNA, but you get the picture), and before we get into the content, I have to applaud WWE for making this list really varied and not snubbing some wrestlers because they’re with competing organizations.

Let’s start off with the retro inclusions. To the shock of no one, Jimmy Snuka and Ricky Steamboat are both featured; however, a very pleasant surprise is that Great Muta, who never suited up for WWE, is on the disc. Muta is an absolute legend in this business and had absolutely blow-away matches in WCW, especially with Sting (one of which is included here). 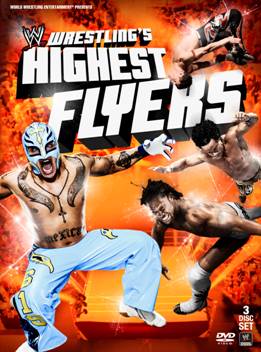 Going down the list to modern guys, you get some of the expected WWE faces (Shawn Michaels, Kofi Kingston and John Morrison, for example), along with some of the crossover WCW/ECW guys like Eddie Guerrero, Chris Jericho and Rey Mysterio.

But here’s where the DVD gets really interesting, because you also get guys who are now in TNA like Jeff Hardy and Rob Van Dam, and Ring of Honor’s Shelton Benjamin. One could’ve expected, and probably assumed, that these competitors would’ve been kept off the list, but WWE didn’t hold back on this DVD and the reward is that wrestling faithful get an even better look at the top flyers.

Even more surprising, perhaps, is that WWE included two men who, essentially, were wasted in their WWE roles. First is TAKA Michinoku, who longtime fans will remember as being the centerpiece of the WWE Light Heavyweight division. Mentioning the division by name is impressive enough, but to spotlight these athletes with one of the best matches — TAKA vs. El Pantera — was a real treat.

The second of these superstars is Ultimo Dragon, who, let’s be honest, had a very forgettable run in WWE. Dragon is featured in bouts against Mysterio and Jericho here, which is an absolute thrill for anyone who loved watching him in WCW.

So bearing that list in mind, is there anyone that WWE forgot? Yup.

Top of the list is Owen Hart, who in his early WWE days (and even into his later days) definitely qualified as a high flyer. A couple more luchadores could have also been easily featured, such as Psychosis or Juventud Guerrera, as could have American wrestlers like Billy Kidman, Paul London, and given that WWE has access to WAR matches, The Great Sasuke (who also did a couple WWE matches) and Hayabusa could have been on the discs as well.

At the same time though, the list provided is pretty wide-reaching and you can’t really say that anyone included doesn’t belong here.

Additionally, the content, overall, is superb, especially in match selection. I really have to give WWE’s research team full props here, because in most cases they really dug deep to find bouts that haven’t been on previous DVDs. Sure, Rey vs. Eddie from Halloween Havoc has been used (many times) in the past, but there are some truly rare bouts here, including some from WWE Superstars and Sunday Night Heat. Going back to Muta for a second, the featured bout between him and Sting is absolutely phenomenal and is a must-watch.

We also get some cool featurettes with WWE superstars going airborne to give a first-person perspective on how they pull off their amazing moves. This is used sparingly so it’s not too annoying, and makes for some fun watching.

The one complaint I have, however, is that the superstars are only introduced by a video montage. I would have much rather had commentary from the likes of Jim Ross and competitors like Rey and Jericho talk about the included athletes rather than the clip job. I get that this is done to illustrate just how quick and marvelous these guys are, but supporting comments are always appreciated.

The bottom line is if you’re a guy like me who appreciates aerial mastery in matches, then this DVD is most definitely for you. Pick up Wrestling’s Highest Flyers, post-haste.