The NCW Femmes Fatales promotion has its fourth gala this Saturday in Montreal, and the company has given Québécoise wrestlers a place to challenge some of the top names in women’s wrestling. But for Anna Minoushka, who competes regularly against men, it’s a whole different challenge.

“In Quebec, I’m the biggest girl here. I stand out,” bragged Minoushka, who is Kim Varin, a suicide prevention counsellor by day. 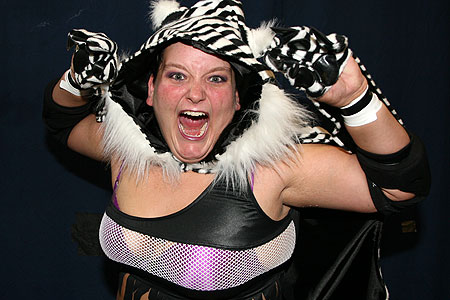 “With girls, they are smaller than me, so I have to work big versus small,” she said. “But with the men, I can work a little bit more big versus big. It’s different in the way that you will build a match.”

On Saturday, at NCW Femmes Fatales IV, at Centre de Loisirs St-Barthélémy, Minoushka gets her dream match against former TNA Knockouts champion Awesome Kong. “She’s the girl I wanted to face once in my life. So I’m so excited to face her soon.”

The 26-year-old Minoushka, who lists her weight at 223 pounds, sees it as an opportunity to learn.

The Femmes Fatales promotion is run by Stéphane Bruyere and LuFisto (Genny Goulet). Both see Minoushka as a valuable asset. “On a smaller level, Anna Minoushka is to Femmes Fatales what Amazing Kong was for the start of the Knockouts Division in TNA,” said Bruyere. “She has her own character, she is totally different than the other wrestlers not only physically but also in ring. In a wrestling event, it’s really important to offer diversity to the spectators and Anna can be a definition of diversity by herself. Also, with her size, she is often facing men in the ring and that is helping her character to evolve.”

The Femmes Fatales promotion purposefully has a variety of shapes and sizes, said LuFisto. “It’s important for the company not to have all their women based on the same cookie sheet look,” she said. “Femmes Fatales wants diversity and Anna Minoushka brings just that. She is bigger than most girls but still can show some agility while performing with strength. She is cocky, loud and over-confident while being a super heavyweight in the women category and that is gold to a promotion.”

According to Minoushka the likes of Melissa and Daffney have been incredibly accommodating. “They take time with us if you have questions, and they take the time to answer you. They will give you some ideas on how you can do this, how you can do that, work that differently. They are really helping us.” 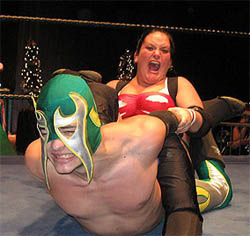 In April 2010, Minoushka made the trek to Berlyn, Illinois, home of SHIMMER, where she worked on the Sparkle undercard. Minoushka left with some suggestions of things to work on, and a point of comparison between the two women’s wrestling promotions.

“It’s a little bit different because SHIMMER has its own fan base, and the wrestling is different too,” she explained. “Over there, there’s less characters, it’s more into wrestling, how you wrestle your match. Here’s, it’s more the character; you can play more with your gimmick than just the wrestling. So you can combine both, instead of there, where they don’t have lots of gimmicks, but lots of good wrestlers.”

Growing up in St-Jérome, Québec, her parents frowned upon her being a wrestling fans, and wouldn’t let her watch. Eventually, Varin befriended a few wrestlers, and ended up training with Marc the Grizzly and Mr. Cobra. “It was fun, but a little bit hard because at the time I was training with them, there weren’t a lot of girls,” she said.

Though her in-ring debut wrestling was in May 2003, she’d been a second to the Russian Binovich Fouranov in NCW for a few months already — hence the name Anna Minoushka. “I’m not stuck with it, because my gimmick has taken another level after that. Now I love the Russian side, but I’m not emphasizing the Russian thing. I’m more on the other part of the gimmick, which is the big beast.” 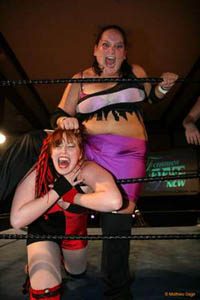 Minoushka has earned the respect of many of the men on the Quebec scene, said Bertrand Hébert, a former force behind NCW. “She went from fighting against the establishment of what a female wrestler should be to being one of the most believable wrestlers, man or woman, on any given shows in the province of Quebec,” Hébert said. “Any promoter should be proud to have her on his show. She works hard and makes everything she does — including details — look good.”

It’s good to be bad, she said. “I’ve always been a heel. I’ve never been a face. Right now, I don’t know what’s coming up for me after. I love being a heel because it’s so easy for me to make people really mad,” Minoushka said, laughing at the comparison to the work she does counselling others during the week. Her gimmick “is the total opposite of me, so it’s like I can let go of myself and be as nasty as I can, and just be myself during the whole week.”

Being honest, however, she isn’t too sure about her own future in wrestling. Last year, she worked more than 30 matches — a lot for a woman in Quebec — but is scaling back a bit.

“I don’t know yet. I don’t think I will go much further than I am now. I wish I could do a bit more but since it’s a little bit harder for girls to get a place in wrestling, I don’t know where I see myself or my career in wrestling either. I think I’m just going to go with the flow and see what’s coming up for me.”

LuFisto believes in her. “Can she go any further? Only time will tell. However, she is dedicated to her craft and she is working very hard to get better every time she steps in the squared circle. If she keeps on putting so much effort, the sky is the limit.”