Brickhouse Brown DVD lascivious and over the top

Brickhouse Brown, the self-proclaimed master of seduction, is back with the release of Brickhouse TV: A HighSpots Original, The Complete First Season.

And Brickhouse Brown delivers. As HighSpots suggests: “We recommend that you do not have a drink in your hand while watching this, as you’ll likely choke, spill, or throw it across the room — you’ll be laughing so hard!”

In the first of six episodes, Brown launches in with, “Why I’m not in the WWE,” as he blames everyone from Johnny Ace and Jerry Lawler to Downtown Bruno and Steve Lombardi for, “sippin’ on that hate-o-rade.” Brown takes the viewer back to the late ’80s, where it was proposed that he could sign with the WWF and work the gimmick of a Chippendale dancer, getting paid $200,000 a year. That is, until a named WWF vice-president sexually harassed him, according to Brown. 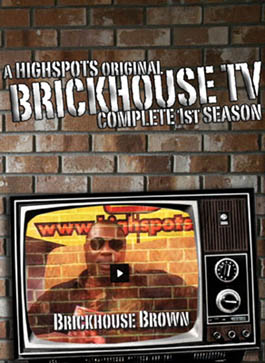 “I got strong constitution up here,” Brown says, beating on his chest. “You get a raw deal if you didn’t play the game.” In one final diatribe to conclude Episode One, Brown questions what Johnny Ace ever did to earn his current executive role in WWE: “He was the flag bearer for the f—in’ Sheepherders,” laughs Brown, who uses effeminate gestures to insinuate that Sheepherders Luke and Butch were gay. “I wonder where that flag got stuck!”

Episode Two opens with Brown assuring his audience that “Anything I tell you is proof positive — I’m telling the truth.” Here, Brown speaks of his run as the Texas Heavyweight Champion in World Class Championship Wrestling, and how he “lost the belt in the shower while I was washing my ass!”

Ethnicity issues are the theme of this episode as Brown sheds light on some of the challenges he faced being a black wrestler in the ’80s, specifically in World Class. Blaming Eric Embry for why the tag team of Brickhouse Brown and Iceman Parsons “didn’t get the run we should have,” Brown calls up Parsons on his cell phone to share some insight.

“There was no better black team out there,” Parsons says over a barely audible cell phone connection, referring to their years in World Class, Memphis, and Japan. Brown and Parsons then collaborate to tell a story about a confrontation with Skandor Akbar after hearing him use the term “nigger-lover.”

The highlight of this segment is hearing Brown talk about how he knocked out Sid Vicious one night in Baton Rouge, Louisiana. “That nigger don’t know what he’s doing,” Sid apparently told Rikishi in a locker room. “Nobody better call me nigger to my face,” Brown concludes.

Episode Three surprisingly begins with Brown speaking on the topic of Mick Foley’s hygiene and his “reputation for not taking a bath.” In a strange twist, Brown follows this by saying “we are still friends to this day.”

Graphic stories of sex involving Mick Foley and a woman nicknamed Humbaby follow, as Brown gets creative with metaphors like “No curtain-jerkers here, let’s get right to the main event.”

In an abrupt and strange transition, Brown brings up the time he spent in the Portland territory working for Don Owen. What follows is a hilarious story involving “Playboy” Buddy Rose, cocaine, and a drug dealer — a tragic-yet-comical highlight of the entire DVD. “Every guy in the territory was on dope,” says Brown, who claims some of the best marijuana came from Portland, due to the oxygen-enriched climate. “Everyone has their vice. My drug of choice is a fine piece of ass,” he boasts. “I couldn’t get enough of them arena rats.”

As another entertaining and insightful segment winds down, Brown revisits racial issues with a rant about Col. DeBeers (Ed Wiskoski). “He lived his f—in’ character and was the same prejudiced f—ing ass behind the damn scenes,” says Brown, leaning into the camera. “The mother—— would never put me over. F— you Col. DeBeers!”

Brickhouse Brown is more subdued during Episode Four, when sharing his thoughts on TNA wrestling, and the current roles of Eric Bischoff and Hulk Hogan. “Hulk Hogan and I are pretty cool,” says Brown, who makes it clear that he’s looking for work. “I might have a chance with TNA now that Dutch Mantell is gone. I walked out on him when he was the booker in Memphis. Worst booker I ever had in my entire career,” says Brown, who later gives Mantel credit for being “clever, slick and sly” and “turning the Puerto Rico territory on fire as a booker.”

The interviewer gets Brown’s opinions on Sting, the Steiners and Jeff Jarrett. Here, Brown re-tells the story, found on the 2009 shoot DVD, of how he “got Jeff his first piece of black p—-. Do I get any thanks for it? Hell no!” referring to several failed attempts to find work in TNA. “Kurt Angle has jungle fever too,” Brown says in another nugget of self-congratulatory wisdom. “Once you go black you can never go back.”

This segment is particularly sexist and vulgar, as Brown opines on present-day women wrestlers including Melina and Mickie James. Digging up names from the past, Brown then speaks of Dark Journey, as he shares a cautionary tale involving Dick Slater and Bill Watts: “Don’t bring your bitch into the business,” Brown warns. “The boys are either gonna get her, or the promoter will.

“Bill Watts started f—ing Dark Journey, which ended Watts’ marriage. He got the jungle fever,” Brown adds with a laugh. “This is the same man who told me that I’d be a rich man if I got my brains out of my testicles!”

Dishing dirt at length on Sunny, Missy Hyatt, Miss Jackie and Lady Maxine, Brown shares both his eyewitness accounts, along with his fantasies, in the utmost graphic detail. “You don’t mind me, I get stupid sometimes,” he admits, looking directly into the camera. A lengthy story follows about Woman (Nancy Benoit): “God bless the dead,” says Brown, “But that p—- makes you go cuckoo for Cocoa Puffs.”

And though no dirt is dished on Baby Doll, when the interviewer brings up the name, Brown responds with a laugh: “Baby Doll? She got to be old as dirt now!”

This segment wraps up with a humorous story about Robert Fuller, his valet Sylvia, and a drug dealer named Peaches, involving a cocaine debt and payback. Brown concludes, “I’m just like the mailman — I’m gonna deliver the motherf—in’ truth!”

In Episode Six, the season finale of Brickhouse TV, Brown is asked to share his thoughts on WWE’s current wellness policy. “Everybody knows Randy Orton does drugs,” Brown launches in, “But hell no, he’s not going to be suspended because he’s a big money maker. (If you are on the) B-team, they gonna get punished.”

Reggie B. Fine then phones in as Brown introduces him as his ex-manager, and “the original pimp” of wrestling. The sound quality of the cellphone is poor, as Reggie B. Fine is barely audible. “Gimme some juice on some bitches,” Brown requests of Fine. Some barely intelligible discussion of Miss Jackie being “country and turnip greens” follows, along with some ranting on Jerry Lawler. “A high-powered coward,” Brown says of Lawler. “Brian Christopher? He lost his house, his wife, and is living with his grandmother,” Brown and Fine concur.

Before their conversation comes to an end, Brown tells Fine: “The wrasslin’ business ain’t no fair. You can’t be too good or too bad, ’cause they’ll get rid of you.”

The interviewer does a good job bringing Brown back to the wellness policy topic, as Brown speaks of how prevalent steroids and natural growth hormones are today, compared to the ’80s. A story about George Wells smoking crack follows, as Brown delivers the message: “Crack is whack. Dope is dope when you do f—in’ dope. I never let the dope take over me — but the bitches did.

The final segment concludes with a revolting and graphic story that involves Brown, Junkyard Dog, Paul Orndorff, Tony Atlas and Adrian Adonis one night in a hotel room snorting lines of cocaine. “Adrian Adonis sh– all over the whole room, lost his bowels because of the cocaine,” says Brown, still disgusted after all these years. “‘Guys, I can’t stop!’ Adonis is yelling. What the f— were we supposed to do?”

Yes, Brickhouse TV delivers one jaw-dropping tale after another, uncensored — and, for the most part, highly entertaining. That’s why HighSpots has just released Brickhouse TV Season Two, boasting: “The FCC may have banned him, but we still let him cut loose on Highspots TV! He’s so funny we couldn’t get him on just one disc. So this time, it’s double the trouble and twice as nice!”

Overall, Brickhouse TV Season One is 90 minutes of intriguing insight and entertainment as Brown is real, though often over the top in his lascivious delivery. The second season looks to be more of the same, as Brown shares insight on “Why Tito Santana hates him,” and “How ‘gay for pay’ is the only way to superstardom in the world of professional wrestling.”

“So if you like what you see,” Brown suggests, “keep tuning in to Brickhouse TV.”