CALGARY – Before Superstars started taping, Bret Hart’s music blasted through the Scotiabank Saddledome and the crowd erupted… only to groan when it turned out to be a commercial for RAW vs. Smackdown 2011. As chants of “We want Bret” echoed through the arena it seemed the crowd’s patience was wearing thing. It took awhile, but eventually their demands were realized.

When tickets went on sale, the main event was advertised as a dark match featuring Hart, John Cena, and Randy Orton against Nexus. Seeing Hart wrestle, even in a limited capacity, in Calgary for the first time since 1997’s Canadian Stampede pay per view was likely a big motivator for ticket purchasers.

Instead, Hart was the “guest enforcer” for what was supposed to be a four-way title match between Orton, Cena, Wade Barrett and Sheamus. I heard a few fans around me grumbling about Hart not wrestling, but it didn’t change the huge reaction as he made his way to the ring. It was an emotional moment seeing Hart walk down the ramp to the ring in Calgary for the first time in 13 years that sent chills down my spine. 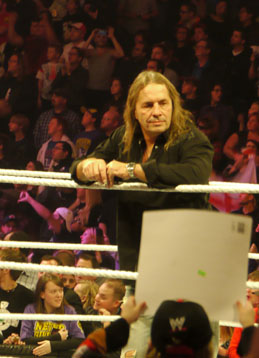 Bret Hart returns to the ring in Calgary for the first time in 13 years. Photo by Jason Clevett

Continuing with the TV angle, Barrett informed the crowd that he had ordered Cena to not participate in the match, making it a three-way contest. Hart simply stood outside and watched the match unfold. Barrett was caught unaware standing on the apron and taken out with a bicycle kick by Sheamus, who then set Orton up to be finished with the Celtic Cross. Orton reversed into the RKO for the win.

After the match Nexus attacked Orton, and Hart hit the ring and helped Orton clear it out, before locking Heath Slater in the sharpshooter to a roar of approval. Orton and Hart celebrated in the ring before Hart walked around ringside shaking hands and hugging fans. As Hart made his way up the ramp waving goodbye, it felt like things had come full circle in the life and career of Calgary’s favourite son.

Unfortunately, the current generation of Harts didn’t get quite the same opportunity to shine. It was 14 years ago that a young Harry Smith and TJ Wilson wrestled in the opening match of a house show at the Saddledome in memory of Smith’s cousin and Wilson’s best friend Matt Annis, who had died the previous summer. Having traveled the world, signed with WWE, and been tag team champions for the company, last night marked the first time that the now DH Smith, Tyson Kidd, and Natalya appeared together in Calgary. Receiving a huge ovation from their hometown fans, the match with tag team champions Cody Rhodes and Drew McIntyre was fun but short and furthered the dissension of the team. Natalya had a huge grin on her face as she hit the ring for her match with Alicia Fox, which lasted approximately one minute. One of WWE’s faults is that they fail to capitalize on opportunities to enhance their stars in their hometowns, and with Natalya scheduled to challenge for the Diva’s title this Sunday at Bragging Rights I had hoped for more. 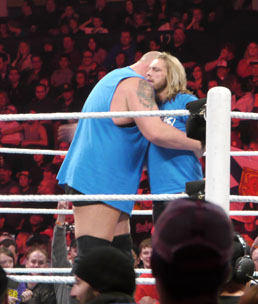 The rest of the show really wasn’t anything special. The fans remained vocal despite lengthy promos, commercial breaks, video game commercials, Knucklehead promos, and more. Several fans responded with laughter and cheers to Daniel Bryan quoting Lance Storm’s “If I can be serious for a minute.” While Cena and Orton’s tag match against Husky Harris and Mike McGillicutty was fun and the battle royal was entertaining, most of the matches were very short. Take away Bret’s post-show appearance and it really wasn’t anything special. Personally I much prefer house shows where I get the chance to see wrestlers in longer matches without TV constraints or pay per views over a TV taping. I am sure others would express the same, except that WWE hasn’t had a house show in Calgary since 2005.

That seems to be the odd dynamic between Western Canada and the WWE. At one time Calgary and Edmonton were regular stops on the tour. The fans are always loud, supportive, and there to have a good time. Yet we are lucky to get a TV taping once every year to year and a half, haven’t had a house show in half a decade, and the only pay per views here took place in 2004 in Edmonton and 1997 in Calgary. It is obvious that Alberta loves WWE, it would be nice if WWE loved us as much back.

Jason Clevett is from Calgary, Alberta and despite rumors to the contrary is not Bret Hart’s personal bodyguard.