WINNIPEG – When Daniel Bryan arrives in Winnipeg later this week for his match Saturday against The Miz at a rare WWE Supershow, he will be doing so in an environment that is somewhat familiar to him. After all, it was just about a year ago that WWE’s United States champ came to the River City for a CWE card.

Instead of fighting in front of hundreds, like he did for that September card in Winnipeg, Bryan will instead perform at the MTS Centre, where the capacity can go above 10,000. 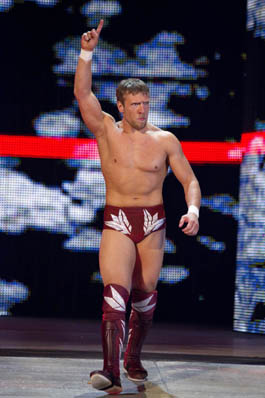 Though Bryan enjoyed his experience here last September, he is very amped up for the show this coming Saturday.

The whole transition has been a marvel for the man who travelled across North America on the indy circuit for years as Bryan Danielson, performing in front of crowds that don’t reach as large as WWE’s audiences. Because of his contract situation, which has seen him finish independent commitments amidst his return to the Fed’s lineup, Bryan has seen the difference between the two very closely, and it makes him more appreciative of the opportunities he now has, especially for shows like the Winnipeg card which will host both Raw and Smackdown superstars.

“It’s always crazy when you’re going from wrestling really small shows to these large WWE cards, especially in Winnipeg, where there’s guys from both brands on it. It’s going to be a huge show,” Bryan told SLAM! Wrestling. “It’s kind of surreal, because literally two or three weeks ago, I was wrestling in front of 200 people in Milwaukee. I don’t know how many thousands of people will be there in Winnipeg, but it’s going to be a really good show with the card they’ve got on.”

Before Bryan makes it to Winnipeg, however, he will first travel to Western Canada for a Raw broadcast from Calgary. Surprisingly, this will be Bryan’s first trip to what has arguably become the hotbed for Canadian wrestling.

Wrestling in Cowtown, however, will be a bit different than it is in Winnipeg or Montreal (another upcoming WWE tour stop), thanks to the heritage that each city has. In the days of the territories, much like in the States, Canadian cities had their own promotions and as a result, different styles became the norm.

Similarly, Bryan changes his ring work up a bit, depending on where he’s coming, based on where he has travelled before.

“I do try to adjust my style to where I’m at,” Bryan remarks. “I know that if I’m wrestling, say, in Chicago, and I have a large independent fanbase there, I can do a couple things differently than if I was in Wichita, Kansas.”

Bryan points out, however, that the general style of a region has changed as more and more fans take in the model that WWE brings to the table.

“Now, it’s a little more homogenized where the people are part of the WWE Universe and they enjoy what WWE presents on TV,” Bryan says.

Despite this, the regionalness does creep up every so often. As several wrestlers have commented in the past, Canada as a whole tends to react differently than their American counterparts, at times cheering for heels and booing faces out of the building. Thus, Bryan still has anticipation going into Calgary’s Raw show.