There is a lot of talk these days about second and third generation wrestlers, and the pressures they face living up to their predecessors. But perhaps no second-gen grappler ever faced the challenge that El Hijo del Santo did; after all, his father, El Santo, is as close to a deity as any wrestler has ever become.

When Santo (Rodolfo Guzmán Huerta) died in 1984, it was a national day of mourning in Mexico, as people took to the streets in anguish. Through his years in wrestling, El Santo permeated the popular culture in Mexico like no other wrestler anywhere in history. 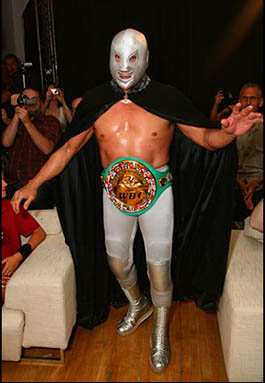 Aside from the wrestling, there were the comic books, the movies, the masks on kids and adults alike.

In Toronto recently for an appearance at the Rue Morgue Festival of Fear Horror Expo, a part of the Fan Expo Canada, El Hijo del Santo talked with SLAM! Wrestling after his first-ever match in Canada on the Saturday night.

What was the key to the success of El Santo in Mexico?

“They’re celebrating right now 200 years of the independence and 100 years of the revolution. There hasn’t been a hero in the last 30 years, there hasn’t been that one person to unify the country like my father, El Santo,” he explained through a translator. “He debuted in 1942. They saw him, they admired him, and he helped introduce wrestling to TV in Mexico … and he made it popular basically until this day. After that, the exposure he got from TV, the comics and the movies, that made him the super hero that he is today.”

Jorge Guzmán Rodríguez was the only one of 10 children to enter pro wrestling. The wrestling storyline was that on his deathbed Santo told his son to carry on the tradition and to never lose the mask as part of match stipulation; the reality is that the son had wrestled for almost two years before his father’s passing, but had only been allowed to start after finishing university.

But it wasn’t only his father’s wrestling that fascinated him. “I have a degree in film, cinema. I always wanted to get into the film business, regardless of being a wrestler,” he said. “I would have gone into the movie business if I hadn’t become a wrestler.”

Regardless, aside from the boots to fill, it was the silver mask, “The Saint,” that was a challenge.

“As a wrestler, [El Santo] was the number one name in Mexico, number one in lucha libre. As a father, he was an extraordinary gentleman,” he said. “The best memory I have of him is just his spirit, just being a great father.”

El Hijo del Santo admitted that it isn’t easy being a hero all the time.

“It’s not easy. It’s a lot of responsibility. But it’s what I do, and I love it,” he said. “When I don’t have my mask on, I’m a normal person, an everyday person. But when I put on the mask, I love it — I love the mask and what it has done for me.”

That’s perhaps why his rudo turn in late 1996-97 was one of the most memorable in wrestling history. “For one year, I was a heel. It was very hard, especially for the kids — they were sad. But for me, I was really happy because I got to be the bad guy. It was fun to bring that out, to get a different reaction after so many years. I went back to being a technico for the kids.” 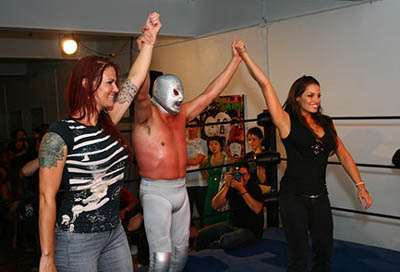 Having seen the gimmick table that El Hijo del Santo imported into Canada, it is evident that the support of the kids is just as important to his bottom line as the cool, hip adults who saw him perform in an art gallery adorned with lucha libre-inspired paintings.

He has been more than a wrestler. There are the promotional elements, such as the cartoon on the Latin American version of the Cartoon Network. He has been an environmental activist, speaking up for the turtles and whales caught in the garbage in the Baja California’s water system, straddling the U.S. and Mexico.

“I want to do more,” he vowed. “The persona of El Santo can be just as big as Batman and Superman. Why not be worldwide of El Santo? His image is very noble and very courageous like Superman and Batman.”

To that end, El Hijo del Santo has been promoting shows under the Todo x el Todo banner in Mexico, and has international goals.

“I want to bring lucha libre to Europe, Spain, the UK, France, with a concept that lucha libre is not just a sport, it’s an art form,” he said. Last year, he brought a few luchadores to England to test out the concept. A return to Canada next summer is being talked about as well. 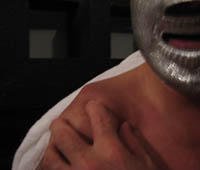 According to published reports, El Hijo del Santo is 47 years old, but he laughed when asked about that — “more or less,” he joked, adding in English, “Secret!”

How much longer can he perform in the ring?

“You saw me wrestle tonight. Did I do well? I feel great. The only issue I have now is my shoulder,” he said, pulling down his post-match towel to show his right shoulder, with a massive knot jutting up. “It is the biggest injury I’ve had in 28 years … “I hope to be wrestling for another 10 years, if I stay healthy.”