Beverly Lehmer, who died August 30, 2010, spent a few years in the early 1950s under the thumb of Billy Wolfe, the czar of women’s wrestling. Having taken a break for a short marriage, she returned to the business part-time, on call for promoter Joe Dusek, who promoted throughout the Midwest.

Based out of Council Bluffs, Iowa, at the time, Lehmer had no problem with the unpredictability of it all.

“I’m a spur-of-the-moment type of person,” she said, so getting the call at the last minute was okay. “Usually when he would call me, the girls had been in an accident on the way, didn’t show up, it was time to wrestle and nobody was there. I’d be at a bingo game, and my name would be on the loudspeaker and I’d go. He’d say, ‘Bev, can you go home and get your tights?'” 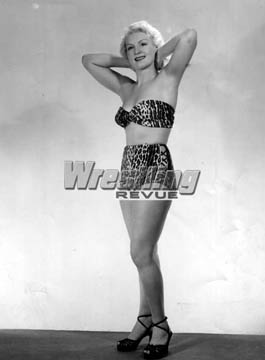 Lehmer’s recalled her last match as being with Mildred Burke in Denver in 1968. On one occasion, she was in a mixed tag main event with Gorgeous George as her partner, and said that was her biggest ever payday — $600, which was actually $1,200 because Wolfe took half.

Born in December 1932, Lehmer fell into the wrestling business. One of her sisters, Carolyn, babysat for the manager of the Council Bluffs Auditorium, and he got them work, selling tickets, hot dogs, working the bingo. Carolyn read about women wrestlers and the money they made and decided that was what she wanted to do. The manager brought in a few male wrestlers here and there to train the Lehmer girls — Beverly had been coerced into being her sister’s workout partner.

“The first one he had come was Shirley Temple’s brother, George Temple. We were in the paper, and I had him up on my shoulder in an airplane spin,” Beverly remembered. Then a wrestling school in Omaha opened for women, run by Johnny Dobbs, and there Beverly met a new friend who was older — Bev was only 17 — and who got them an appointment to see Billy Wolfe when he came through town. (Carolyn would work a little bit around Iowa as well when she was of age.)

“We met at one of the hotels there. She asked me to go along with her, because she didn’t want to go by herself,” Lehmer said, unable to remember her colleague’s name. “But I wasn’t interested. They were more interested in me than they were in her. They guaranteed me $100 a week. My dad, at that time, was making $50, working on the railroad. I was a junior in high school. I quit school and went to Toledo, Ohio, and started my wrestling career.”

Dying her hair blonde, the 5-foot-6, 155-pound Lehmer was usually a baddie.

“This rather tall and talented blonde loved to play the ‘heel’ as she battled Penny Banner and others of that era. She asked no quarter and gave none as she relentlessly attacked as the bell rang. Beverly’s full nelson was a dangerous and devastating weapon,” reads the Glamour Girls website.

“We hardly dealt with promoters, hardly ever, Billy Wolfe did all that,” she explained. “Billy took 50% of everything. He paid 50% of our transportation, which he usually provided, in limousines — we all rode together. He made all the hotel reservations, just all that.”

The stories about the notorious Billy Wolfe are legion. “One thing Billy liked to do was sell diamonds to the girls. He liked to keep them — I didn’t ever buy them — but he’d sell the girls diamonds and they would owe him. That was his way of keeping them there,” she said, adding, “I didn’t like him.”

Despite working for such a man as Wolfe, they were good times, she admitted. “It was interesting. I kind of didn’t fit in. I wasn’t from a farm, but I was the little farm girl,” she said. “A lot of them were heavy drinkers, a lot of gays.”

She described how she thinks she was perceived. “I was a girl with a good body. I was strong. I never, ever got tired. Except one night I was wrestling and had the flu or something and was really sick. I would wrestle and just have a lot of energy. I was very strong. A lot of times with Billy Wolfe, Billy Wolfe had us girls wrestle in the ring, shooting each, we called it shooting, doing the real thing in case somebody ever challenged Mildred Burke, his wife. They’d have to wrestle us first, before they ever got to her.”

The outfits for competing in were a challenge, she admitted. “We bought good bathing suits. Then you got tressed webbing. It was real, real, real heavy, heavy-like, 10 times heavier than elastic. You’d have somebody put criss-cross across the back, and put elastic around the legs of the swimsuits,” she said. “We had robes made. Our shoes were special made, our boots. I had green and gold shoes and a green and gold robe.”

“There was a shoe place where Billy got our shoes made, tall boots that laced all the way up. You could design them however you wanted them. Somebody made my robe. It was made out of velvet and sequins. I don’t remember who made it.”

“I did meet somebody, and I did marry somebody I didn’t know. It was a terrible thing. I was young and dumb,” confessed the now Lehmer Maddalena. “That marriage lasted three years. I married somebody I didn’t even know, somebody I met when I was with Mildred Burke in California. I knew him a week. It was just so stupid. After three years, we divorced.”

On her own, and having not saved anything from her wrestling days, Lehmer did a number of jobs besides the occasion match for Dusek: she waitressed most of her life, painted houses with her husband, and wallpapered with her daughter.

Lehmer had a son and a daughter, and at the time of her passing, had 10 grandchildren and two great-grandchildren.

The family and wrestling rarely mixed, she said, recalling one incident in Omaha. “My children went to one wrestling match. My daughter, my nose was bleeding, and she was so worried about me. ‘Mommy’s okay, honey, mommy’s okay.’ ‘How come that lady hit you, momma?’ She was just little. My son doesn’t remember. She was maybe three years old.”

Being a celebrity had its drawbacks, said Lehmer.

“I wrestled under my real name too, which was not good because, several years after I quit wrestling, there was some jerk, he was from New York — I know because one time the operator interrupted. He called me all the time. He was a stalker. He’d called, ‘Beverly, I want you to wrestle my sister barefoot. I’ll give you’ — it started out he’d give me $1,000, and it ended up he was going to give me $100,000. But it was the same message every time. I’d have girlfriends answer the phone and say I wasn’t here. We’d whistle into the phone. Sometimes it go to where he’d call me maybe six times in one day. I got my phone number changed. He got my number right away. I got an unlisted number, and I had it for years, until about three years ago. He had seen my picture years and years after I’d quit wrestling. They had my picture in Ring Magazine, in some article. They had my real name, and from Council Bluffs, Iowa. He must have called somebody by that name of the family, and he knew I lived here.”

Lehmer moved to Estes Park, Colorado, and it was there she died in her home on August 30th. In Colorado, Lehmer helped people dealing with alcohol abuse. Beverly had battled alcohol addiction herself, her sister, Alice Fales, told the Omaha World-Herald. In fact, the day she died, Lehmer was to receive a coin in honor of her 34 years of being sober.

Over the last five years, Lehmer had a hip replacement and two shoulder replacements, though she blamed waitressing and lifting heavy dishes more than the wrestling.

“I still look pretty good. I’m still an attractive older lady. I’m not tall like I used to be,” Lehmer said, adding that she had shrunk three inches.

Her friend, Edith De Lay, who arranged the interview in June 2009, had nothing but praise for Lehmer. “I’ll tell you, since Beverly wouldn’t, that she is still very beautiful — inside and out. She’s a very refined, gracious lady, full of love, who makes everyone around her feel good about themselves. She’s my hero. (She rarely mentions her wrestling days.)”

To a degree, Lehmer admitted to being a bit embarrassed by her wrestling days.

There were no services, at Lehmer’s request, her sister said.

Greg Oliver wishes there were more people out there capturing the stories of these stars from the past. The interview with Beverly Lehmer came out of the blue and was quite interesting. Greg can be emailed at [email protected].