It seems hard to believe, but it has already been 10 years since wrestling video game perfection was achieved.

Yes friends, it was a decade ago that THQ released WWF No Mercy for Nintendo 64. Just about every gamer who has experienced No Mercy by way of the original cartridge or emulators will tell you that this is not just the best N64 grappling time-waster, but the best (or at least one of) in the history of digital mat wars.

If there is no better gauge of its popularity, consider that amateur game programmers have taken the original model and continue to create new versions, including a Ring of Honor adaptation that lived on the web for several years, and Create-a-Wrestler guides for new heroes and villains are still found across the ‘net. 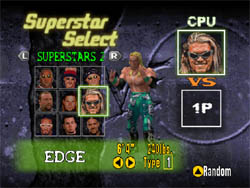 Edge was striking five-second poses when No Mercy was released in 2000.

No Mercy’s engine was simply unbeatable. Characters had deep move sets (especially for that generation of console gaming), the graphics were, for the era, stunning, and you didn’t need to be an expert to figure out how to execute maneuvers.

Undoubtedly, though, part of the appeal of the game was the roster that the WWF had at the time. This was slightly before WWE acquired WCW and when you look back at the names included here, you can really get a sense of greatness that was already there, and what lay ahead for future main eventers.

Of course, time being what it is, especially in the wrestling world, many of the superstars and women (Divas had yet to become a staple of WWF/E lexicon) have since left the Fed. Many have retired, some are in TNA or the indies and others, as is unfortunately too often the case, have passed on.

To commemorate the decennial of No Mercy, let’s set the wayback machine to the summer of 2000, when the roster would have been finalized, and see just where these 70 guys and gals are today.

Still in the fold

Perhaps (or perhaps not) surprisingly, 17 of the 70 wrestlers and other personalities — just over 24 per cent — are still gainfully employed by the Fed, including three members of the McMahon clan (Vince, Linda and Stephanie).

Ten of the remaining 14 individuals are actively on television and can be expected to be seen every week (Triple H, Undertaker, Christian, Chris Jericho, Edge, Kane, Mark Henry, Matt Hardy and the broadcast team of Jerry “The King” Lawler and Michael Cole).

Of the four remaining personalities, Jim Ross is not on TV but still with the company, Dean Malenko is an agent, Howard Finkel works the web and Pat Patterson, at last report, was a consultant. 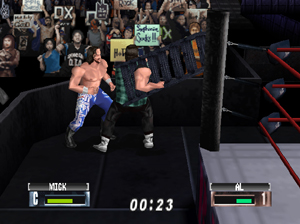 It’s an intra-EV2.0 match as Mick Foley takes on Al Snow in a Ladder Match in No Mercy.

Working for the other guys

People complain/comment about TNA employing WWE ex-pats, and if you look at the No Mercy roster, you certainly can see that these individuals have a point.

It goes without saying that the rash of deaths has decimated wrestling’s population, and that unfortunate statistic is clearly visible on the No Mercy roster.

Seven of the 70 personalities included in the game have passed away in the last 10 years. That’s right — 10 per cent. The number is staggering, especially when you consider that only one, Fabulous Moolah, passed away in her senior years.

The others are names we all know all too well: Chris Benoit, Eddie Guerrero, Test, Big Bossman, Crash Holly and Davey Boy Smith. At least half of these superstars would likely still be wrestling today, and potentially all of them would still be involved in the business either as talent, trainers, agents or working the show circuit.

It’s also worth pointing out that, in stark contrast to today’s video games that are filled with legends, only one — Andre the Giant — was included (posthumously). 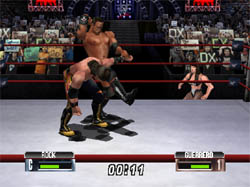 The Rock and Eddie Guerrero battle in No Mercy as Chyna watches on.

Hung up their boots

Here’s where the waters start to get murky; after all, as it’s been pointed out that no wrestler ever retires. That being said, you can count 24 roster members — more than a third — that have essentially or formally called it quits.

Let’s start with the clearly defined retirees. “Stone Cold” Steve Austin and The Rock have moved on to showbiz, Lita’s in a band, JBL’s in investments, The Kat (Stacy Carter) is in real estate, Trish Stratus has her yoga studio and other pursuits, Chyna is, well, Chyna, Shawn Michaels hung up his boots earlier this year, Tori hasn’t been heard from in years, The Godfather (or Goodfather) is, well, let’s just say in a business not suited for WWE’s current fanbase, Steve Blackman hasn’t competed anywhere in ages, Jacqueline and Ivory are both done in wrestling, and Shane McMahon, perhaps the most surprising of anyone, left WWE last year under a shroud of mystery.

Now let’s look at some of the other names. Jerry Brisco is living out his retirement years but is still active with WWE in the sense that he’s often called upon to do WWE DVD work, scouting, and the occasional PPV skit/Legends moment, Mae Young can still be counted on for two to three appearances per year, Faarooq (Ron Simmons) has been spotted on the indie scene a couple times, ditto Paul Bearer, Perry Saturn mysteriously disappeared for years before surfacing as a married man in Minnesota, Rikishi has done a couple indie shows as well but is largely (pardon the pun) more likely to be seen at fan conventions, ditto Hardcore Holly, the former New Age Outlaws are in the same boat, Scotty 2 Hotty is largely done in wrestling but has done the odd booking, and Terri Runnels is on the show circuit as well. Lastly, there’s Viscera, who has been spotted at a couple shows as well but is not doing the indie circuit full-time. 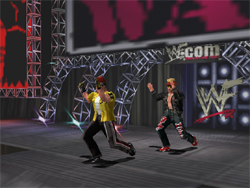 Grandmasta Sexay and Scotty II Hottie dance their way to the ring in No Mercy.

The list has been narrowed pretty severely, but let’s take a look at who else was on the roster way back when who couldn’t be easily designated for one of the above categories.

Albert / A-Train (Matt Bloom) is working in Japan (and is quite successful there I might add). Taka Michinoku went back to Japan as well after his WWE stint, as has his former Kaientai cohort Sho Funaki (indeed!), while Essa Rios, who also spent some time in TNA around X Cup time, is primarily back in Mexico and is now with CMLL, Bull Buchanan spent some time in Japan and is still occasionally doing indie wrestling on this side of the Pacific and, to wrap things up, Brian Christopher is still occasionally wrestling, most notably working the Hulkamania tour in Australia.

In the meantime, WWF has become WWE and absorbed WCW and ECW. THQ continues to produce WWE video games and has since picked up other valuable licenses (including UFC). The video game industry itself has upgraded from Generation 3 consoles to Generation 5. Nintendo and Sony (PlayStation) are still big players in the gaming market, while Microsoft (X-box) has come on board. SEGA, however, has fallen by the wayside after the Dreamcast debacle.

It just goes to show that a lot can happen in 10 years; and it will be interesting to see where everyone on the Smackdown vs. Raw 2011 roster will be in 10 years time … stay tuned.