Jimmy Yang is the star of Highspots’ aptly titled Creative Has Nothing For You series, in which he documents a career of ups and downs marked with a series of firings and re-hirings.

He starts this nearly two-hour shoot by relating a convoluted but amusing tale about how putting up Diamond Dallas Page’s Christmas lights eventually got him into WCW, despite of the fact he’d only had a handful of matches in his budding career. There, he’d meet Gregory Helms and Shannon Moore at WCW’s Power Plant, a training facility he described as a place dedicated to evaluating athleticism rather than teaching pro wrestling psychology and moves. 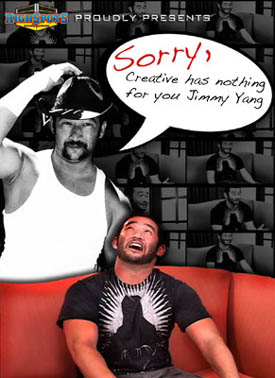 Yang would get fired only four months into his stay but Jimmy Hart brought him back to do WCW Saturday Night and would be instrumental in creating Jung Dragons. WCW also introduced him to Chris Benoit, and Yang offers some less than flattering insights on the man so many have put over despite his horrifying crimes.

The death of WCW brought him into WWE, and he was sent down to Heartland Wrestling Association, where he would learn the finer points of psychology from trainer Les Thatcher. But his tenure there, like in his first WCW run, would be extremely short, as WWE found itself burdened by far too many contracts, using only one roster for RAW and SmackDown while saddled with escapees from WCW and ECW.

His release, however, proved a positive as Yang got a shot at All Japan. The experience would prove exhausting, as between tours Yang would return home, and consequently, he’d take 25 trips to Japan in one year alone. Having a daughter forced him to quit Japan, but soon after, an opportunity in TNA came along after he got a call from Jeremy Borash, an old acquaintance from his WCW days. He appeared on TNA’s first PPV, hesitantly accepting the Flying Elvises gimmick they offered.

Yang would return to WWE again, debuting at a pay-per-view to interfere in Tajiri’s match versus Rey Mysterio at 2003’s No Mercy. From there, he would go on to play a mute (to hide his Georgian accent) Japanese mafia henchman.

Yang recalled having a tough time staying motivated, as he’d put on dynamic matches with Paul London, but get ignored by those in charge before getting his release. He re-discovered the fun of wrestling on the indy circuit and working for Ring of Honor. He worked there for about six months or so before unexpectedly returning to WWE.

Trying to impress a girl he was going out with, Yang showed up backstage at a pay-per-view looking to score some free tickets, and while hanging out, Michael Hayes enlisted him to help demonstrate a high spot for a match they were putting together for Shawn Michaels and The Spirit Squad. Though he wasn’t under contract, Yang would be driven through a table.

Yang shockingly asserts that when he met up with Vince McMahon, McMahon admitted having no idea that Yang had even been released.

After getting invited back and offered a contract, McMahon came up with the idea of turning Yang into an Asian redneck and adding the name “Wang” to his moniker because it rhymed with Yang, which McMahon apparently found hilarious. Yang basically confirms the oft-repeated rumour that McMahon’s strange sense of humour often influences his gimmick choices for some of his talent.

His luck — often bad — held up again as Yang was let go once more, this time over “budget cuts,” which he found less than honest seeing as how the company is a massive earner while his salary was relatively paltry.

Yang comes across as an easy-going fellow whose downfall can probably be attributed to him staying out of politics and not acting like a squeaky wheel that constantly needs to be greased. One of the best parts about shoot interviews, and it’s the case here as well, is that they clear up some of the inaccuracies that surface on the ‘Net and get passed down from one website to another by getting the story from the one who was actually there. Also fascinating here is the troubling notion that the WWE’s left hand doesn’t always know what the right hand is doing.