When most wrestlers around today talk about Rod Fenton, they are referring to the long-time promoter in two very different territories — Vancouver and Arizona. But as Lightning Rod Fenton, he carved out quite a career for himself on the mat.

Rodney Clair Fenton, an Edmonton, Alberta native, wrestled professionally for 18 years, with his weight listed in the newspapers as anywhere from 145 to 190 pounds. 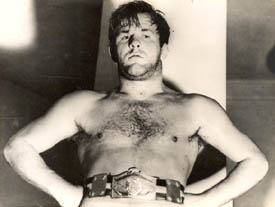 Rod Fenton. From the collection of Mike Rodgers

A 1934 newspaper story from Lubbock, Texas, promoted Fenton’s skill with the drop-kick, still a new thrilling move at the time.

“When a wrestler executes the drop-kick he assumes, approximately, the form and lethal qualities of a cannonball,” explained the story in the Lubbock Morning Avalanche News. “Bound into the air and catapult yourself feet first, up to your ankles, into the chest of your opponent — that’s the drop-kick of Fenton, the drop-kick which enabled him to blast out a surprising win over Otis Clingman at Amarillo two weeks ago.”

Often, newspapers in the southern U.S. talked about Fenton as a rough and tough “hairy-chested lumberjack” from the “ice hockey courts,” who was prone to illegal moves. Other times, he is called the “middleweight champ of Canada.”

Another Lubbock, Texas, story, this time from 1935, takes particular joy in “the sneering, snarling, ruthless giant-killer from Edmonton, Canada.”

“They don’t come much meaner nor more villainous than Fenton, who delights in choking, gouging and otherwise illegally wearing down the resistance of his adversary. He means bad medicine to almost any grappler who faces him.”

The same paper claimed fans had grown tired of his antics in 1937. “Fenton, as a steady diet, soon palls on the grappling customers, but they like to watch him at his work now and then. He’ll draw a large crowd and a loud boo tonight.” 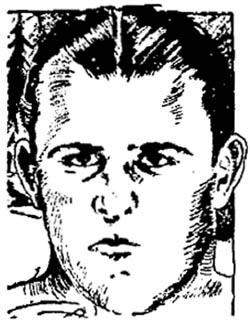 Back in North America, the April 1, 1948 Wrestling As You Like It program for the Chicago promotion warned that “Junior heavyweights had better take to their cyclone cellars when the Canadian grappler gets in town.”

“Oak-armed Rod Fenton gazed out of the ring at the empty seats about him and made a silent resolution: ‘Tucson needs a wrestling promoter — in the worst way.’

“Right then and there, without further ado, he grunted and groaned for the last time. After 18 years as a professional grappler, ‘Lightnin” Rod Fenton hung up his tights and bulging biceps. The promotion game was his new ‘baby.’

“Fenton, a compact 200-pounder with a cigar of almost equal weight, will assume the challenging title of professional mat matchmaker for the Tucson Sports Center when 1951 comes to life a couple of weeks hence. It’s a post no one has wanted for months.” 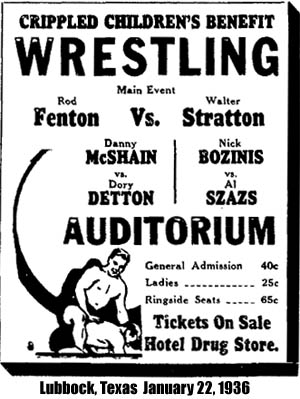 Perhaps Fenton was always cut out to be a promoter. The fall of 1935 has many references to a “Match-maker Rod Fenton” in the Lethbridge, Alberta promotion. His big order of business upon taking over was switching to middleweight wrestlers for a faster pace compared to the typical heavyweights.

In Tuscon, his first card was January 6, 1951 (Great Moto versus Sam Menacker). “If you give the people good, tough competition, they will come out,” Rod was quoted as saying. For the next two-and-a-half years, he promoted his weekly card into sellouts with Gorgeous George, Heavyweight Champion Lou Thesz, Women’s Champion Mildred Burke, Baron Leone, ex-heavyweight boxing champion Primo Carnera, and Junior Heavyweight Champion Danny McShane.

But then, abruptly in March 1953, he switched allegiances to his other passion, the horses, taking over as general manager of the city’s Rillito race track. He had always been an avid follower of the ponies, racing his own thoroughbreds at Arlington Park, Washington Park and many other tracks. In Amarillo, Texas, Fenton became a quarter-horse follower through his friendship with Lewis Blackwell, owner of the famed quarter horse Hard Twist. 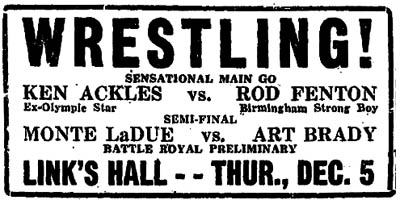 Fenton had also provided “Rod’s Picks” for the sports pages of the Tucson Daily Citizen.

In February 1958, Fenton bought back the wrestling promotion for Tuscon, which he had sold to Texans D. W. Bartlett, a U. S. District Judge, of Waco, and former wrestler Dr. Karl Sarpolis of Amarillo.

According to the newspaper story, Bartlett and Sarpolis were anxious to sell because the Tucson territory proved to be too far from their Texas headquarters.

“When I heard they wanted to sell, I jumped at it,” Fenton said. “I’ve had enough of a rest.”

Yet at that point, Fenton was already promoting other Arizona cities such as Phoenix, Mesa and Yuma.

At some point in the late 1950s, Fenton was brought in as a partner to Cliff Parker in the Pacific Northwest as well, and they grew the Vancouver, B.C.-based territory into a powerhouse that was eventually sold to the trio of Sandor Kovacs, Don Owen and Gene Kiniski in 1968. (Ironically, Fenton had recruited Kiniski into pro wrestling when the latter was still at the University of Arizona.)

Unlike what he’d promoted before, the show in Seattle and Vancouver featured the heavyweights. Dory Funk Jr., in an online post, said he felt a little out of place at first. “After the first week I had a meeting with promoter Rod Fenton. He told me, ‘People here pay to see big men in the ring. Just look at my stars, Gene Kiniski, Don Leo Jonathan, Mike Sharpe, Dale Lewis, and Tex McKenzie.’ I had some concern that maybe Rod Fenton was doing a favor for my father and doubted my ability. ”

Over the years, various wrestlers have commented on Fenton.

“I kind of liked Old Rod Fenton’s cut at it. When Rod booked shows, he didn’t really look at what was a good one and what was a bad one. He judged his worth by his percentage. I guess that’s all life is — playing the percentages,” said Don Leo Jonathan in a 1998 Whatever Happened To… interview.

In 1997, Lou Thesz addressed the difficulties of the territory in an interview with Mike Rodgers’ Ring Around The Northwest newsletter.

“With Seattle being in the corner of the country they didn’t have access to a lot of the heavyweight talent a lot of the time. That was a long ways out there and that was prior to the sophisticated flying equipment we have today. It would take a week to get there,” explained Thesz. “They had some good competent wrestlers, they did have a few heavyweights there at the time, I was one of them and then later Rod Fenton took over and did a much better job of promoting than [Seattle’s] Bob Murray. Murray was a restaurant man and not much of a wrestling man, he was a boozer too. It ran very well, Rod Fenton did a great job, promoting not only there but Vancouver, BC and he was one of the most important promoters in the country at the time. He was drawing 10, 15, 20 thousand people. Bob Murray was a 2,000 or 3,000 person promoter. A different thing altogether. But Rod was a former wrestler and he knew what he was doing.”

Not everyone was a fan, however. 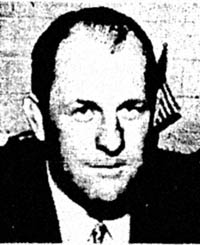 Ricky Hunter called Fenton “a little fat fellow” who “had some crazy ideas,” in 2004. “I did what Rod wanted, but I didn’t always agree with him. He was a bit of an oddball.”

Pat Barrett talked about Fenton in his book, Everyone Down Here Hates Me. “Fenton loved to gamble at anything, cards, horses. You could always tell when he had a losing streak at the horses by your paycheck.”

Fenton would return to live in Tuscon in 1970, and stayed there until his death at age 63 on Sunday, October 3, 1976, at his home at 11 E. Orange Grove Road. The cause of death was not reported.

“He was something all right, from his casual fedora to his small, yet infectious, smile. Rod Fenton was a gentleman … and a gentle man,” wrote Asa Bushnell in an editorial in the Tuscon paper after Fenton’s passing.