When James C. Melby released Gopherland Grappling in 2006, he covered the Minnesota wrestling world from 1933 to 1959. The recent release of George Schire’s Minnesota’s Golden Age of Wrestling from Verne Gagne to the Road Warriors picks up where the late Melby left off. Unfortunately for Schire, he missed his target audience, the hardcore wrestling fans. 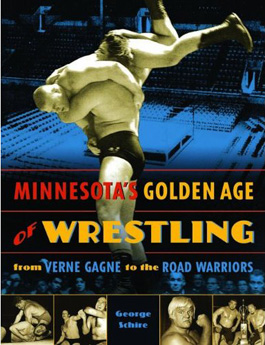 A wrestling fan who buys such wrestling books as Chokehold or Sex, Lies and Headlocks would be excited for a book covering the history of Minnesota’s American Wrestling Association (AWA) from the early 1950s through the demise in the early 1990s. They would be confused, frustrated and disappointed by this one, however.

Schire presents the book as a work. Almost like a wrestling angle. It hurts the book as Schire writes about every match and angle as almost they were real. He even tries to push that the money offered in a battle royal is legit. “The main event was a $100,000-purse Battle Royal — the largest dollar prize ever presented…”

There are no inside stories, and it is basically a history of the AWA promotion as the fan would have seen on television from week to week. The book fills space with quotes from televised wrestling promos, large photos (in black and white) and using terms like “heartthrob babyfaces.” Also, he seems to cover only the AWA. Minnesota would often have many non-AWA cards during this period, including NWA and WWE shows, but they are never mentioned except when stating ex-AWA stars were used when the WWE visited Minneapolis in the mid-1980s. He also misses out talking about talent born in the Minnesota area, like Rick Rude, who might not have wrestled for the AWA.We find out, via an odd photo in the middle of the book, that Schire organized an AWA convention in 1984. His connection and love for the AWA helps and hurts the book. He comes off as a loyal fan but not an insider.

The photos are vast but not spectacular. No backstage or inside shots, and the posed shots are often shots most fans have seen repeatedly. Looking at Gopherland Grappling, they did advertise it more a photo book and so the story is lacking. Minnesota’s Golden Age of Wrestling is pushed like a vast encyclopedia of Minnesota wrestling but misses. Schire could have tried to acquire backstage, traveling or training photos from some of those who worked within the AWA.

The book would never be touched by someone who had never seen a wrestling match but is written in that matter. Schire missed his target audience on who would be reading this book. If he thought about it, he could saved a lot of time. He would not have had to waste time explaining what a suspension meant in the wrestling world and how “Modern-day Hollywood star and WWE wrestler The Rock is the grandson of Peter Miavia.” (And yes, they misspelled Peter Maivia’s name.) Schire seemed to have done much of his research by watching AWA’s weekly television shows and wrestling magazines, which at the time only did stories on worked angles and never gave any inside information.

The book lacks any new interviews. Dick Beyer, Baron Von Raschke and Greg Gagne are quoted on the back cover but none were quoted within the book. Schire promotes himself as a historian, but he is not a strong writer. He would have been wise to find a co-author who could have worked on interviews from those who worked within the AWA. Gopherland Grappling got a pass because stars from the 1930s-50s were mostly gone. But there are dozens of wrestlers from the AWA still alive.If you were a fan of the AWA, this book might be enjoyable to you. It does tell a year-by-year history of the angles and big matches for the promotion and includes features biographies on the bigger names from the promotion. But if you are looking for inside stories and interviews, this book would be a disappointment. There are no new inside stories on Verne Gagne’s training of wrestlers, the story of Hulk Hogan leaving the AWA in late 1983 or the closing of the promotion in 1990. There are no stories on what the wrestlers are doing today. When they retired from wrestling, the story ends. Larry Hennig retired in the mid-1980s, but what has he done for the last 25 years? We do not find out. (Real estate is the answer, by the way.)

There is no discrediting that Schire is a fan. But he is a mark fan, and he comes across as such in this book. This book would have worked if it was written in 1992, but with every wrestling book exposing the business, this book seems outdated. As a matter of comparison, imagine if Mick Foley’s Have a Nice Day just went year to year explaining that “As Cactus Jack, I defeated a determined and strong Triple H in front of my hometown fans.” The book would have never reached the acclaim it did, and would have long been forgotten.

If you are able to get this book a few years down the line, at a discounted price, it might be a quick and enjoyable read. But I would not waste my money at full price. It ranks among the The Complete Idiot’s Guide to Pro Wrestling class of wrestling books.