Jon Moxley has risen from the ashes of inner city crime and poverty to become a champion across the indy circuit.

Dragon Gate USA booker Gabe Sapolsky called Moxley “the new rising star on the scene,” and it seems his opinion is shared among many wrestling promoters. 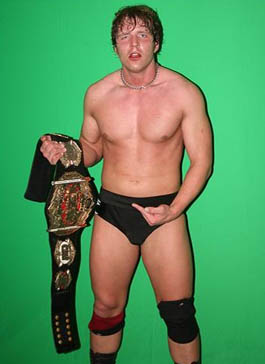 Jon Moxley with the CZW title.

The six-foot-four, 230-pound Moxley has made terrific strides in the few years he’s been in the business. Before joining Dragon Gate in late 2009, the 24-year-old made enough of an impression to earn gold just about everywhere he’d gone: Heartland Wrestling Association (HWA), International Wrestling Association Puerto Rico, and Insanity Pro Wrestling. Most recently, Moxley won the Combat Zone Wrestling (CZW) and Full Impact Pro (FIP) heavyweight titles in February and April 2010, respectively.

“You gotta keep it in perspective; guys let stuff like that go to their head and it screws with their minds. I’m pretty laid back about things these days but I know I have to deliver,” Moxley told SLAM! Wrestling.

“Winning the FIP title was cool because it’s been a pretty high profile championship over the last few years and now it’s recognized in DGUSA, but I look at it like the work is just beginning. I have a high standard to live up to that was set by the guys who had that belt previously, and I wanna set the bar even higher. Same with the CZW title; CZW believed in me and invested a lot in me, so I take my role as the torchbearer for the company seriously. I wanna be the greatest CZW champion and the greatest FIP champion ever, bar none.”

Moxley is riding high, especially considering his origins in a rundown section of Cincinnati’s east side.

“My neighbourhood was pretty much a big stretch of government housing and all these torn up apartment buildings all owned by different people. It was easy to get the feeling like all the garbage from the city ran down and washed up there, so that gave me a chip on my shoulder very early on.”

Moxley said he became very independent, for his outlaw neighbourhood, with its own set of rules, forced him to look out for himself.

“But I hated it because every day was a struggle. For instance, there were times that I would have to cave in and do something like sell somebody’s drugs, just so I wouldn’t get beaten half to death. But then there were other times where dudes would catch me walking by and try to push me around, and I had to draw a line, even if I was gonna get pulverized. I ended up earning respect that way — not that I cared, I just wanted out.”

Wrestling proved an escape, and Moxley would rent any tapes he could find and watch them over and over again. He looked up to Bret Hart, because no matter what, “The Hitman” fought the odds and always endured.

“He could take a beating and survive — he never got tired and in the end he always outsmarted the big goons. I probably didn’t realize why at the time but I could really relate to that.”

Moxley later got hooked to the vision of the “mad genius” Paul Heyman coming out of Philadelphia, catching every episode of Extreme Championship Wrestling on an old TV out on his fire escape, the only place he could find decent reception.

“When I was 12 or 13 I discovered ECW and fell in love with it immediately. It appealed to me on every level.”

A teenaged Moxley became so enamoured with the spectacle that one day he showed up at Les Thatcher’s office looking to train to become a wrestler. But Thatcher turned him down, telling him he couldn’t train at HWA until he turned 18.

“He charged something like three grand but he said I could come back and watch practice later. I left fuming and was this close to slashing his tires, then I calmed down and came back later and met Cody Hawk. He was cool and sort of took me under his wing, and let me be on the ring crew and sell concessions.”

Moxley admitted to eventually weaselling his way into class and getting trained by Hawk.

“Cody had been around a long time and was a damn good worker. He taught me everything he knew pretty much for free just because he knew how bad I wanted it, and that I was willing to work harder than anybody for it.”

“Jon started with me in 2005,” remembered Hawk. “He did a fantasy camp with me in 2003, I think, and got the itch. When he turned 18 he joined the HWA training program and trained with me for six months or so before we turned him loose.”

Soon after forming “Necessary Roughness” with Jimmy Turner, Moxley would capture one half of HWA’s tag team belts. As a singles wrestler and the organization’s top heel, he would enter a student versus teacher feud as he took on his old mentor Hawk. They headlined the first ever HWA online pay-per-view, March 2006’s CyberClash, with a cage match, which Moxley won. Moxley, who would win HWA’s heavyweight title three times, later went on to partner with Hawk for a few months, and together they ruled HWA’s tag division.

Although 2006 also saw Moxley wrestle two WWE matches — a January tag match against MNM, [Mercury, Nitro, and Melina], and a handicap match versus Big Show in May — he wasn’t left with any overwhelming desire to make it to New York afterward.

“WWE is where most of the money is so everyone has thoughts of getting there, but I get the feeling in WWE you kinda have to be an asshole, an ass kisser or be able to shut your mouth and tolerate those types. I couldn’t do either,” Moxley said, and pointed out that spending just five minutes with Paul London and Brian Kendrick in DGUSA is enough to make him exclaim, “I love the indies!” 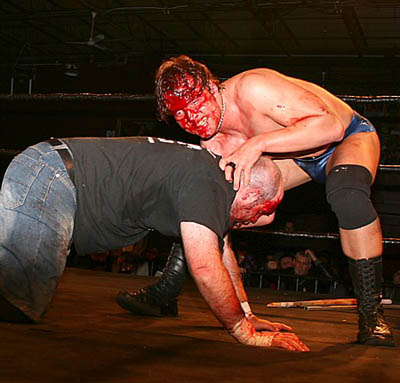 Moxley in bloody action in Philadelphia for CZW.

Moxley illustrated the many differences on the independent circuit, noting audiences in different cities have varying and sometimes diverging tastes.

“I like the challenge of having to deliver week in, week out, in different environments, with such a variety of opponents. I enjoy ‘ultra-violence’ in Philadelphia as much as I enjoy a purely technical match in Florida,” Moxley said, adding he’s having fun being part of a fresh, new product like DGUSA as well.

“Fighting Tommy Dreamer on PPV was real cool for me personally,” he said, referring to the March hardcore contest he had with the “Innovator of Violence” at DGUSA’s Mercury Rising.

Sapolsky hinted that the best is yet to come.

“His promo and his grip on his character are what makes him stand out to me. He has an old-school style of working too, which also makes him stand out in today’s seen. I see him getting better and improving — he’s still really young,” Sapolsky said.

And in spite of their inauspicious start, Moxley and Thatcher have developed a working relationship, albeit a somewhat unorthodox one.

“I started working with Jon after he was already wrestling and saw his upside that hadn’t been touched. He was willing to come get the extra time with me once a week, and then would bring me tapes from time to time for me to go over and give him feedback,” Thatcher said. “I did his diet to add a few pounds before a WWE dark match I opened the door for, and recently have had the chance to work with him in Philly when I was there doing training for CZW. Jon has a future; it will just take a little settling down, refining the rough spots and maturity.”

Moxley called Thatcher a great resource for him, but admitted it took Thatcher a long time to warm up to him because he thought he was “a screw-up.”

“And he’s careful to always insult me in public when we see each other, just to keep up appearances. That’s how I know he cares,” Moxley said before laughing.