Cornette tries to correct the WCW invasion on Guest Booker

WCW vs. WWE (then known as the WWF) seemed like the ultimate dream feud of the 1980s and 1990s. Little kids would take their action figures and put on their own dream cards featuring Hulk Hogan vs. Ric Flair and The Undertaker vs. Sting. It was almost unthinkable that such a feud could actually take place. After all, there were two competing wrestling organizations. If such a feud did take place, it would surely be the greatest of all time.

Unfortunately, it did take place and did not even come close to living up to expectations. Although some money was made off of the first joint pay-per-view after WWE’s purchase of WCW, it was not based on proper hype and storytelling. The ultimate storyline that could have taken fans on an emotional rollercoaster for at least a year crashed and burned with little fanfare.

Enter Jim Cornette. In the DVD Guest Booker with Jim Cornette, Cornette is asked to rebook the WCW invasion of WWE. The fiery Cornette is known for his passion for the wrestling and also his extensive knowledge and background in the business. Cornette does not disappoint, and was one of the most prepared bookers in the history of the Guest Booker series.

Before one casts blame on WWE for blowing the WCW invasion, one must understand the circumstances of the time period. WCW had completely burned out of the talent on the roster and had driven fans away with constant regime changes. WCW hit the reset button so many times that there was no positive brand identity that fans could relate to. On top of that, the biggest names in WCW had very little to offer in the ring at the time and commanded guaranteed big money contracts.

WWE was left with the conundrum of either signing the high priced, low performing acts most associated with WCW, or not signing them and relying on cheaper, yet more athletic acts. The problem with not signing the big money acts is that it would completely water down the idea of a WCW vs. WWE feud. However, by signing them, the often lazy, washed up WCW acts might make more money than the WWE wrestlers who put everything on the line to win the Monday Night War to begin with.

Further complicating matters was the fact that practically no WCW wrestlers were over with the fans. Since they had all been associated with a lame product for so long, it was not as if they could appear on television and get a huge reaction. The top WCW wrestlers seemed like they were not in the same league as the top WWE wrestlers. This led to a dilemma that a feud would seem completely one sided.

As I sit here writing this, the situation seems even more hopeless than I previously imagined. Enter James E. Cornette.

According to Cornette, the number one element to a successful invasion is that the fans must believe it. Cornette is correct. The two concepts that made the wrestling boom in the late ’90s were the NWO and the Austin vs. McMahon feud. Both were based on reality and blurred the line between storyline and real life.

In this case, Cornette seeks to bring an element of shoot fighting to the invasion. He has Vince McMahon come out on Raw and deliver a promo gloating that he owns the WCW wrestlers’ contracts for a year and that they will lay down for everyone on the WWE roster. As a twist, Eric Bischoff shows up and sides with McMahon, blaming the fall of WCW on the wrestlers. Ric Flair arrives and makes a stand for the WCW wrestlers making a veiled threat that “things may happen” in the ring if WCW wrestlers have to face WWE wrestlers. 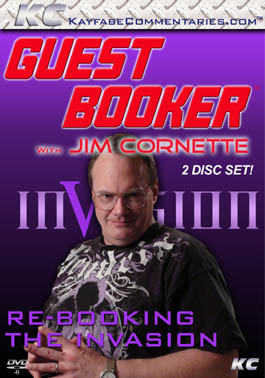 Steve Austin shows up with WWE wrestlers and informs Vince that WWE guys will not risk their careers in the ring with WCW guys for the sake of Vince’s power trip. Finally, the Undertaker appears and announces that he will do unto anyone who steps in the ring with him before they can do unto him.

With that, Cornette would immediately create buzz. Although fans would understand that it is a show, the underlying tension between WCW and WWE wrestlers would likely allow fans to suspend disbelief and buy into this storyline. Also, it would add some juice to the WCW wrestlers. While they were not over in the traditional wrestling sense, adding the element of shoot fighting to them makes them seem tougher and like actual threats.

WCW programming needs to be rehabbed and Cornette would focus on that immediately. WCW and WWE would alternate monthly pay-per-views. For the sake of DVD sales, I will not reveal the names and matches that Cornette sets up to develop the program. I will say, however, that it is very well thought out and his choices work quite well.

Unlike some of the other bookers on the Guest Booker series, Cornette has layers to the storylines. I took at least three times the notes while studying this DVD than I did on other DVDs from the series. Such attention to detail is what would be needed to make this story actually work. The DVD actually has two parts to it, a first for the Guest Booker series.

Cornette has one WCW vs. WWE match on each pay-per-view and he sure makes them interesting. Ultimately it leads to Wrestlemania, where there is a 15-match series with the stipulation that the wrestlers from the company on the winning side will get renewed and the losing side will get fired. The card that Cornette assembles very well may be the greatest card in the history of wrestling.

There is not a correct way to book wrestling. Other great booking minds could be given the task of rebooking the WCW invasion and go in a completely different direction. However, Cornette gives one example for a truly different approach that would have a high probability of success. Hopefully students of the game can look past the specifics of Cornette’s plan and look to the logic behind each decision. The details, though, are critical to understanding the logic.

Sometime I qualify statements before making a recommendation. I do not need to qualify statements about this DVD. If you are a student of the game, get the DVD. You will get Jim Cornette at his finest, sharing stories about WCW, WWE, and OVW. As funny as Cornette can be, it is his competency as a booker that makes this DVD a must see.

The only frustrating thing will be after you finish the DVD. You will compare what could have been to what really happened. While companies can learn from the errors of the WCW invasion, there will likely never be a similar opportunity again. Our only hope is that a wrestling company emerges that embraces that principles of bookers like Jim Cornette. Only then, can a real wrestling war take place again.

Matt Johnson covers WWE Superstars for SLAM! Wrestling. He graduated from Northern Michigan University with a double major in English and Social Studies. In addition to writing, he teachers classes in English, Drama, and World History.