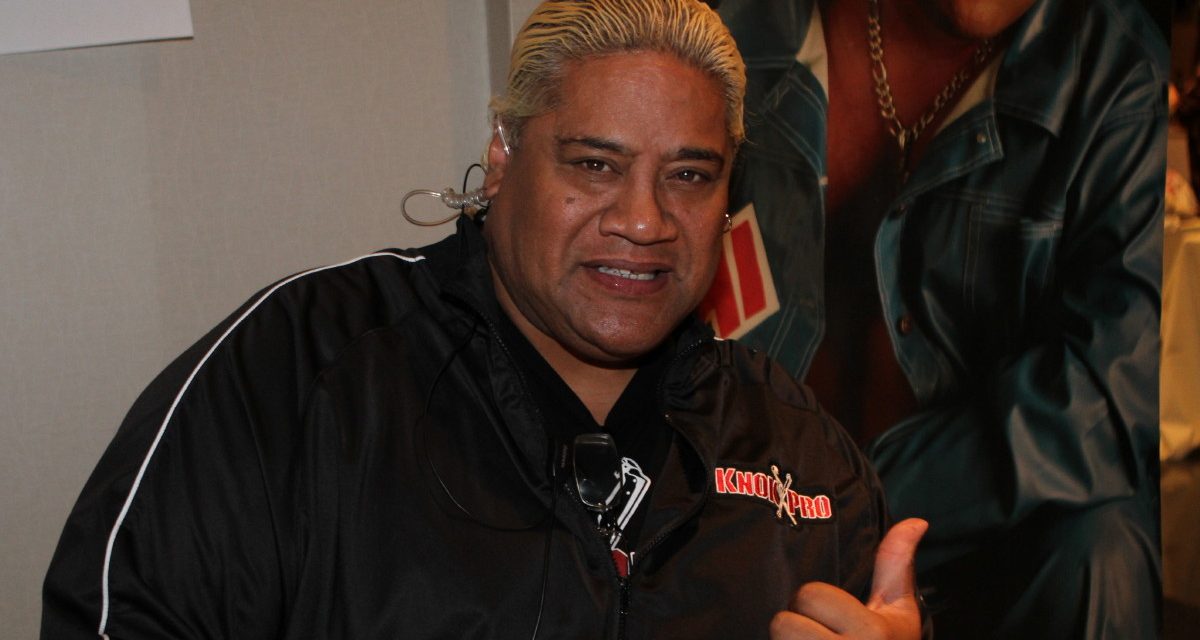 Solofa Fatu has been known by many names in wrestling circles. He’s been a Headshrinker, “made a difference,” been a Sultan, and made an “ass” of himself as his most famous character, Rikishi. As part of the legendary Samoan Anoa’i family he is part of a rich wrestling history — one that just grew with his sons debuting on Raw. 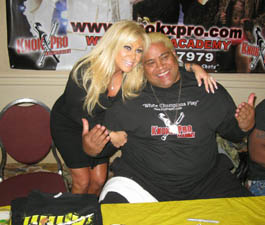 Terri Runnells reconnects with Kishi at WrestleReunion in Los Angeles in January 2010. Photo by Jason Clevett

According to Fatu, the family connection to entertainment runs deep and comes easily.

“You know, I think it has to do with our upbringing. It started off with Peter Maivia and the Wild Samoans. We were a family that was raised up in church as far as the Christian life and so forth. We were always doing some sort of entertainment, performing for people since we were young,” Fatu, who now competes as simply Kishi, told SLAM! Wrestling. “As we grew up and fell into the business of professional wrestling, it wasn’t hard for us to get out there and perform, because it’s what we were raised to do. But learning that part of professional wrestling, we just kind of took that to another level.”

Although he left WWE in 2004, Fatu continues to be popular at conventions, on independent shows, and international tours. He spends most of his time touring overseas and running his Los Angeles-based wrestling school. His “stinkface” still elicits a huge response and many wrestlers will pay tribute to him by doing the move. Such was the case during a Ring of Honor show at WrestleReunion in Los Angeles, where Colt Cabana took out Fatu’s former partner Scotty 2 Hotty and then did a stinkface on Johnny Fairplay.

“First of all, I miss the fans. If it wasn’t for the fans, no matter what move anybody does in professional wrestling, it wouldn’t mean a damn,” explained Fatu. “Second of all, my friend, Scotty 2 Hotty, that part of my career with Too Cool as Rikishi, I miss that part. It was one of the fun times of my career. Not only were we friends, he’s like a brother to me as well. We don’t see each other as much as I would like to, for the simple fact that he lives out there on the East Coast and I live here on the West Coast. I don’t work too many independents. I just am working on a different vibe as far as overseas, working on my academy here with Knokx Pro Academy. I definitely miss him as much as I do miss the fans. He’s lucky Colt Cabana, or whatever his name is, he’s lucky big ‘Kishi wasn’t over there at ROH because I definitely would have hit the ring and gave him some of the rump shaker!”

Being part of a huge wrestling family has its attractions, but it also seems to attract tragedy. There are many comparisons between the Anoa’i family and the Hart Family in triumphs and tragedies. Most recently for Fatu himself, it was the loss of his brother Eddie, who wrestled as Umaga, on December 4, 2009.

“With or without wrestling, any time you lose a loved one in your family is very difficult. Unfortunately, it had to be, you know, God’s time is God’s time,” he started.

“We had been one of the families that had been picked. It’s a great loss, not just for our personal lives, but also for professional wrestling as well, as the fans. As far as my brother, we had a great tour of Australia. You never expect to get a call like that. I’m having goosebumps right here sitting talking to you about it. My dealing with my brother’s loss was through the fans and the family. You would not believe how much heart, calls and emails, condolences from fans throughout the whole world. I was very proud of that.

“Also to have so many people out of the business of wrestling, the Umaga character has touched everybody, good or bad. It’s something that’s out of our hands. You never want it to happen to you personally. I’m very grateful that I had the last part of his life to spend with him in Australia. We had a heart to heart talk. We hadn’t seen each other in a while. With that note, everything was fantastic. So my heart is full, my heart is full. But I can only say this, I’m very sorry for the loss of professional wrestling, such a good wrestler.”

At the time of this conversation, Fatu’s sons hadn’t gone past Florida Championship Wrestling, the WWE’s training ground. He did hype their future, however.

“You guys look out for them! They’re in a developmental deal now. What I told my boys was, ‘You guys have a lot of shoes to fill, but do what you feel comfortable with. Win the fans, win the match.’ They’re seeing why daddy walks through the door limping, don’t want to throw the football, don’t want to play basketball. But they’re going to find out first-hand.”

Another generation of Samoan’s in WWE seems a natural progression to the legacy of the Anao’i family.

“I remember back in my day, doing indy shots here and there on the road, my kids seen me, how I was raised up in the business because they lived it with me. So anytime I’d see the Rotundas, Briscos, or any other third or second generation come into the business, to me, it’s a natural thing to do. I told both my sons, ‘I want to see you play NFL football, but you always have wrestling to fall back on.’ Obviously, they wanted to try the family business and try their hand at professional wrestling. Honestly, the world get ready, because you are about ready to see twice — when I say twice, twice the entertainment, twice the electricity, you’re about ready to see twice of The Rock!”