B.C.’s Mike Roselli a wrestler, an X-Man and more

When SLAM! Wrestling first got in touch with wrestler, stuntman and actor Mike Roselli about interviewing him, it was mid-December 2009, and he was scheduled to undergo a routine knee surgery.

That alleged run-of-the-mill procedure turned into post-surgical hell. But to borrow a line from Gomez Addams from The Addams Family, Roselli’s feeling much better now. 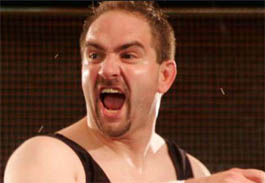 “I went in for a simple day surgery to remove shattered cartilage and I got an infection, like one of those superbug infections. And I ended up in the hospital for almost two months there,” he said, noting he ended up having to go in for three more emergency surgeries.

A blood clot also developed, forcing him to take blood thinners and antibiotics, and essentially worsening an already ugly situation. But such are the risks involved for the 10-year stuntman, who required his initial knee surgery after a stunt went bad. During an action sequence, he jumped from a three-story balcony to a two-story balcony, but his safety wire gave out, causing him to drop 18 feet to the ground.

Roselli’s never been one to take the safest of jobs, having first started out as a wrestler and training sometime after his eleventh birthday.

“My Dad had a really good friend named ‘Cowboy’ Jack Bence, and Cowboy Jack was an old-time pro wrestler. And Jack started training me in Olympic freestyle wrestling and he never smartened me up to business,” said Roselli.

He started wrestling boys his own age in junior high, and continued on through past Grade 12 and into first year university. Over the coming years, he’d collect numerous gold medals celebrating his amateur achievements in provincial and national competitions. John Tenta would coach him at Queen Elizabeth High School in 1988 before getting called up by the WWF and achieve fame as “Earthquake.” At the Burnaby Mountain Wrestling Club at Simon Fraser University, Roselli would be coached by former Canadian Olympian Dave McKay, and go on to Greco Roman gold in the national heavyweight division (130 kg) in 1991.

“Right after the national championship, that’s when I decided I can either go to the Olympics or I can go chase my pro wrestling dream,” he said. 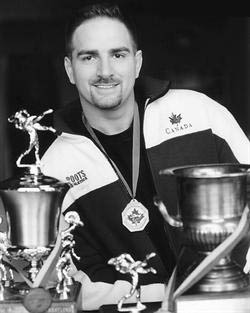 Roselli shows off some of his hardware.

He decided on the latter and dropped out of Douglas College after completing his first year of Sports Science. He already had a head start, for in the summer of ’88, he’d trained at Al Tomko’s All Star Wrestling school.

When asked why he didn’t just don a mask, Roselli said Tomko wouldn’t allow it, insisting Roselli was a babyface. With a second thought, Roselli, who wrestled as “The Olympian,” wondered if Tomko simply wanted to avoid paying him.

All Star also began a long-lasting friendship between Roselli and Pete Smith, who would go on to wrestle as “Rocket” Randy Tyler.

“Mike was always a gifted athlete; one of those guys that makes the rest of the guys jealous because he was already 250 pounds-plus (no weightlifting required), already had good wrestling abilities (no practice required), and he was so immediately accepted by the other established wrestlers, he got good matches and angles right out of the gate, (no breaking-in required),” Tyler said.

By contrast, Tyler said he needed to gain weight, practice hard, and pay serious dues for about two years in order to rise to a similar level. Thereafter, the two started working together, first facing one another in singles matches (with each alternating from heel to babyface), and eventually tagging with one another, as “The BBC” in Vancouver, and “Justice Incorporated” in Portland. 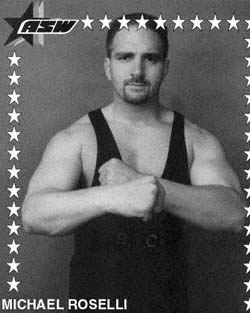 “As a tag team, we complimented each other very well. He was a great and legitimate athlete, at that time being almost 300 pounds, and he was a master at spectacular power moves — full vertical suplexes, power bombs, etc.,” Tyler said. “I was the smaller, high flying type that worked the stick. Somehow, this ‘yin-yang’ approach struck a cord with the fans, and we tagged on and off for over a decade.”

Besides his physical and technical gifts and abilities, Roselli was also easy to get along with.

“One of Mike’s other strengths was always the dressing room,” explained Tyler. “He was always very popular, especially with the bigger names that would come through from time to time, like Hercules Hernandez, Matt Borne, etc.”

Roselli in fact went up against a number of big names, as “Gorgeous” Michelle Starr booked him to work job matches in Edmonton and Calgary for the WWF in the summer of ’91.

“I walked up to Pat Patterson, I told him who I was, that I was the national champion, and he gave me a couple of dark matches right then and there. So I was pretty fortunate,” Roselli admitted.

“They called [Perez] ‘El Cemento’ because he was so stiff. He almost took my head off with a clothesline. I was like, ‘Oh God… ‘”

WWF told Roselli he needed more experience. But also holding him back, Roselli felt, was the fact he didn’t take steroids or other enhancement drugs — a result of rigorous testing in the amateurs — which caused him to lack the huge yet chiselled physique of many WWF performers.

“I went back a couple more times to do jobs, but then I met Sandy Barr in Portland, Oregon. And Sandy had a weekly television show and I dedicated myself for a couple of years just going to Portland every weekend and working for Sandy, because that was great television exposure. And Sandy was one of the best promoters and best people I’d ever met.”

Roselli wrestled “Hacksaw” Jim Duggan and Curt Hennig for Barr, and found himself booked all over the Pacific Northwest. He also worked Japan, wrestling there between 1995 and 1998 for various smaller promotions. The Far East style was far stiffer, which Roselli said he didn’t mind, given his amateur background. Back home, he’d adapt his style depending on his opponent.

“I could be extremely light — light for the veterans, stiff with the young ones. But I’ve got to say, I never hurt one person in all the years I wrestled.”

Stunt work came into Roselli’s life one day when a producer who saw him wrestle told him he’d be perfect to play a villain in a TV series. Roselli ended up getting a job on a Fox children’s show called Los Luchadores, working as both a wrestling coordinator and a reoccurring heel character. 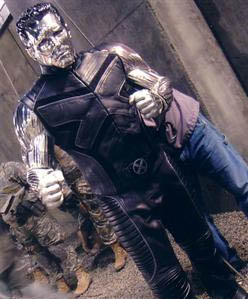 Roselli as the body double for Colossus of the X-Men.

Nowadays, he contracts himself out to different movie studios, but is steady with Paramount and Disney. Roselli estimates he has done stunts for 70 to 80 movie and TV shows, with I Spy, (starring Eddie Murphy and Owen Wilson), being his first big screen break. He’s gone on to do stunts for Fantastic Four: Rise of the Silver Surfer, X2 and X-Men: The Last Stand, in which the six-foot-four, 260-pound Roselli doubled for Colossus, as well as I, Robot, and Catwoman.

With his busy schedule, Roselli again demonstrated the connection between good nature and career success.

“If you’re easy to work with and easy to get along with, your phone will ring like crazy. But if you’re a dick, your phone is not going to ring any more.”

Acting has also become a part of his repertoire, with his biggest part coming, fittingly enough, in the wrestling mockumentary Kayfabe.

In the movie, he played pro wrestler “Steve Justice,” a character he said one of the writers — his old friend Tyler no less — based on Roselli himself: “That was based completely on me,” he said.

Roselli is also busy preparing for a life after movies. Before heading into surgery late last year, Roselli, who’s in his third year of Human Kinetics at Douglas College, was preparing for a biomechanics exam. With an associate degree in Sports Science, and about a year-and-a-half left to earn his Kinetics Degree, Roselli is weighing whether to get into physiotherapy, chiropractics, or teaching.

“Stunt work is exactly like pro wrestling — once you hit 40, your bones start to ache. I’m going to keep doing stunts and keep wrestling until my body says no more. And then I can have something to fall back on.”