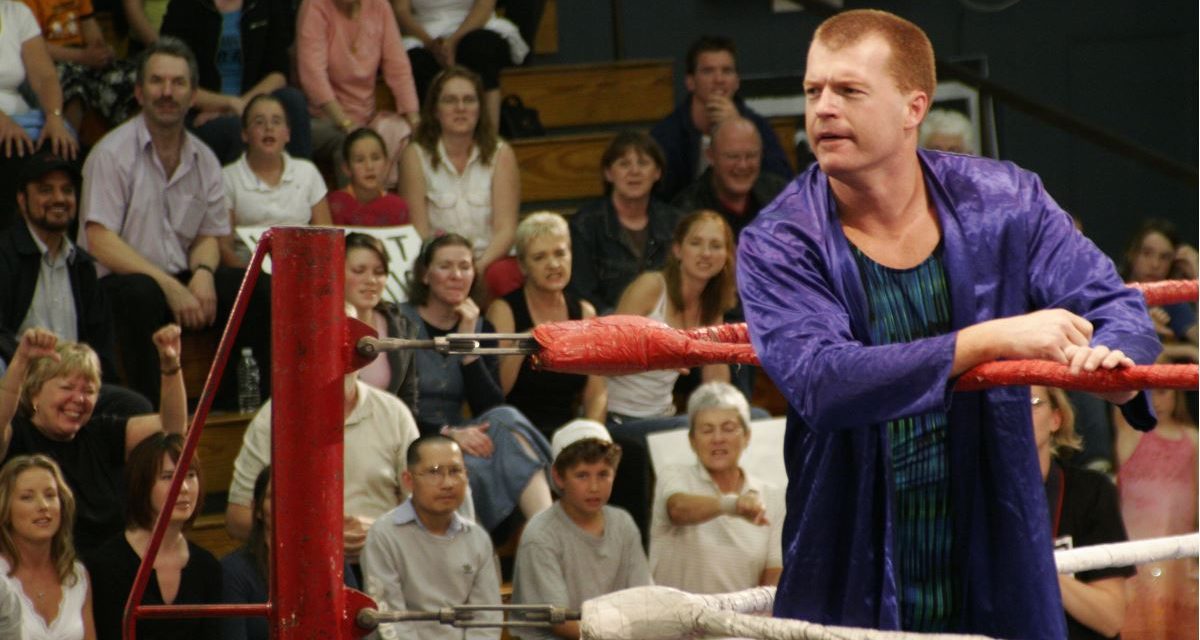 When he was just breaking into the business, Pete Smith had a conversation with one of the veterans in the dressing room after a night on the road. The man was in his thirties and in the twilight of his wrestling career.

“He asked me why I decided not to stay in school,” Smith recalled. “As he was asking me this, he had an empty, vacant expression on his face that reeked of regret. In a few years, he would work security at a local mall if he was lucky. He scared me senseless. I decided that I had to go to university for nothing else than to have something to fall back on if wrestling didn’t make me a millionaire.” 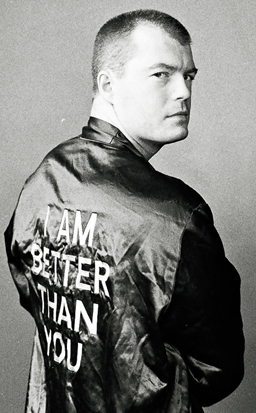 Wrestling didn’t make Randy Tyler — Smith’s wrestling alter-ego — a millionaire — at least, it hasn’t yet. What it did make him, however, besides a champion and now a co-producer in an upcoming wrestling “mockumentary”, is a more educated person. Smith’s lengthy string of academic accomplishments might make one wonder why he would bother wrestling at all considering his success in the scholastic world.

Consider his resume: He graduated as one of the top students at the school of criminology at the prestigious Simon Fraser University with the highest cumulative GPA in his class. He attained a Masters of Criminology at Cambridge University, arguably the most prestigious university on the planet. (While there, he also achieved the highest recognition for sporting achievement as a member of the varsity boxing team.) He then went to the University of British Columbia where he obtained his law degree and again finished at the top of his class. He even managed to earn the Raymond Herbert award as the best “all-around graduating student.” He clerked for Madam Justice Arbour at the Supreme Court in Canada.

All this success has somehow not managed to go to his head. “I am no brainiac — believe me,” Smith wrote on his website. “I also come from a relatively poor family and had to pay for every dime of my post secondary career myself. The point is, if I can do it, so can you.”

He has since taught criminology at Simon Fraser and has worked for one of the top law firms in the world. These days, when he is not in the Extreme Canadian Championship Wrestling ring defending the NWA Top Ranked Wrestling Heavyweight Title, he works for a consulting firm, is still teaching courses at Simon Fraser and is also the director for a large consulting firm.

“Somewhere along the way I serendipitously discovered that I was a savant or something when it comes to school, which opened so many doors for me,” he said of his success, although he is unwilling to give himself any extra credit. “Having said that, I think the real difference for me has been putting the head down and doing the work when it has to be done. Anybody can do it, the real key is discipline.”

It’s that discipline that has kept him at the top of his game in the world of independent professional wrestling. He made his debut in 1987, after graduating from Al Tomko’s All-Star Wrestling School, as one of two students who were given the green light to wrestle on All-Star’s regular shows. (Mike Roselli was the other student.) His first match was against Blacksmith Smith, who was also a greenhorn. The results of that match, Tyler recalled, were not spectacular.

“[Blackjack Smith] threw me out of the ring about four times in five minutes and it suddenly dawned on me that he was throwing me out because he had no clue what else to do,” Tyler remembered. “So we bumped each other senseless, using no psychology and went straight into our flat finish. It was beautiful.”

It’s 19 years later, and the “Rocket” Randy Tyler has come a long way. On the West Coast independent scene, he’s one of the top guys, a frustrating heel that local fans call “Archie” because of his red hair and nerdy mannerisms. He has been able to successfully get under the skin of the fans with his signature, “Sweet Potato Pie!” expression that colours both his in-ring promos and his entertaining wrestling matches.

“As a wrestler, you need to pay close attention to crowd reactions to certain things,” Tyler answered when asked about the history of his interesting expression. “I was in Pasadena at the Rose Bowl and a friend of mine, for some reason that I can’t remember, said ‘Sweet Potato Pie’ in a funny way. Everybody laughed, even people that weren’t there with us. So, at my next show, said it in the same way after nailing a guy with the superkick. The crowd laughed. Then, after the match, fans kept yelling it at me! The rest is, as they say, history.” And hence, a catchphrase was born.

But it takes more than a catchphrase and comic-book character to earn a championship. Smith said he knew early on that he would have to work very hard to attain any level of success in the wrestling business to avoid becoming that man with the vacant eyes he met in the dressing room earlier in his career.

“I just believe that nothing is worth doing half-assed,” he said. “I love wrestling and it’s a great escape from the professional side of things — so I take it seriously as an escape that I want to do well. One thing that drives me to take the sport perhaps a little more seriously than others is the idea that fans pay to watch these shows. I believe we owe it to them, as fans and as paying customers, to make sure they get a performance/show worthy of their time. One thing that bugs me are these new wrestlers that don’t put in a reasonable amount of time and effort. These are the guys that show up without having lifted the weights, without having put some time into developing their gimmick (i.e. tights, robes, etc.) and expect to step into the ring. It’s actually quite insulting to both the rest of the boys and the fans.” 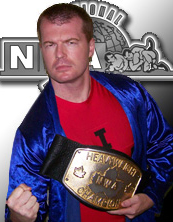 With his ECCW title

It’s an interesting juggling act — Pete Smith the professional academic and Randy Tyler the pompous ass don’t have a whole lot in common — or do they? “On the face, there are few similarities. However, I think that the gimmicks wrestlers choose always have elements of personal fantasy (for lack of a better word). As a lawyer and criminologist, I have to be rather reserved, polite, and always politically correct. Randy Tyler seems to be my opportunity to do all the things I can never do in my professional life. Yelling at people and calling them pathetic is like the ultimate stress reliever, and perhaps even therapeutic for someone that has to be more reserved day in and day out.”

Smith is in the middle of his third title run in ECCW and is enjoying the exposure the promotion’s TV deal has garnered him. But the student striving for success has not disappeared completely — being the champ is not enough. Smith is one of the co-producers for Kayfabe, a wrestling mockumentary that in the process of being filmed. It is an ambitious project, one that required The Rocket to rely on the skills he learned earlier in his academic life — and the ones he learned within the squared circle.

“I’ve been telling funny wrestling stories to two friends of mine (Mike Raven and Mike Scully), for years,” Smith explained. “Eventually, they got the idea that it would make a good script for a documentary/mockumentary. They wrote a first draft, and the three of us worked and re-worked it until we liked the final product. And then, as they say, it’s just discipline from there. We decided we were going to make the movie, and just started doing all the things (the billions of things, it seems) you need to do to make that happen.”

The film, while ambitious, is also important on another level: while fictitious, part of its purpose is to illustrate the strange world of independent pro wrestling. To do that any kind of justice, the crew plans to film some of the movie in front of real wrestling fans. So Smith has reached out to local fans and asked them to star in the project as extras.

“I think this movie strikes a nice balance between making fun of the wrestling business, but also acknowledging that it is one of the best, and hardest, entertainment sports around,” he explained further. “I think anyone who is a wrestling fan will like the final product, and it’s important to us that, in the live wrestling scenes, the passion people have for live wrestling performances comes through. Wrestling fans are an extremely colourful and varied bunch, from little old ladies to stock brokers, to lawyers (to that I can attest), to longshoremen. I’d love to see the whole gambit come out!”

Pete Smith is asked if, in those days after his first match against Blackjack Smith, he ever thought he would ever be a Heavyweight Champion or, for that matter, a film producer. “I always had confidence that I would be successful as a wrestler, but I’m very happy with how things have panned out,” was his answer. “And I’m very excited about this upcoming movie. I love the script and the cast, and we’ve lined up a pretty good crew. I’m optimistic.”

It’s a fairly safe bet that Pete Smith is never going to have earn a paycheque doing mall security. But if his future is indeed secure, it is only, he said, because he vowed a long time ago to be honest with himself. “Self awareness is the key to life,” he asserted. “You have to be aware of your strengths and weaknesses. If things are not going well in your match, your gimmick, your job, or your life, try to look at yourself and critically and constructively figure out why. If you always externalize, and people usually do, it is impossible to go forward and actually learn from past mistakes. I blame myself for every bad match, bad grade and bad day, and try to figure out what I can do to make it better the next time.”

There don’t appear to be too many bad days ahead for Pete Smith and/or Randy Tyler — they are both too busy having fun while working damn hard. The future may be unwritten, but that doesn’t mean it isn’t at least partially planned. When asked what he foresees for himself in the coming months and years, Smith replied, “Legal consulting, more movies, vast sums of money, world domination, and a European vacation.” Then he laughed, but when he did so it sounded a lot more like Randy Tyler’s trademark chuckle. “In that order.”