Nash looks up to X-Division

Diesel. Big Daddy Cool. Big Sexy The Giant Killer. Oz. Kevin Nash may have had a few names in his career, but there can be no doubt that he has been one of the most successful big men in the last decade. At times controversial, the TNA star is never short of things to say, as evident when Spike TV and TNA invited wrestling media to speak to Nash to promote this Sunday’s Slammiversary pay per view.

There’s been criticism of Nash’s current angle involving the X-Division. Nash has beaten up quite a few of their stars, and on Sunday will face Chris Sabin, a match Nash is looking forward to. 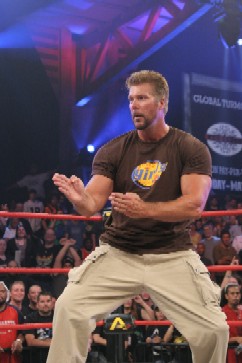 “The reason I am really excited about working with Sabin is he can create a lot of movement, all I have to do is move to his movement which makes me look like I am moving 100 miles an hour. He is a great athlete and a talented wrestler and is really coming into his own. I am hoping we can have a match that will stand the test of time. I think people will be intrigued to see how this match will go. You want to be on the list of matches people want to see, that is your job as a wrestler. I think Chris Sabin and I are an intriguing match based on how the athleticism, physicality and psychology match up. I don’t plan on having a horrible match. I’m targeting the X-Division because if I am going to work with guys, I am limited in what I can do, I know the formula to having great matches with smaller guys. I can dance but I need a good partner and the X-Division guys are probably the best dance partners in the business right now, so if I am going to go out and do it I may as well go out with the best.”

Nash has a great deal of praise for TNA’s X-Division stars, especially Alex Shelley, who has recently become part of the angle aligning with Nash.

“I think there is some tremendous talent in the X-Division. I think Sonjay Dutt is really talented. Jay Lethal is a tremendous talent, I stood ringside for his match with Alex Shelley and was really impressed. Alex is doing a great job, that ‘it’ factor is in him. When I sit and talk to him it is there. He is a smartass, he is sarcastic — when he did a impersonation of Jeremy Borash I thought it was great TV. He has a lot of great qualities and is getting his chance, I am really happy with my partnership with him and want to see how far he and I can develop this. If I got injured, God forbid, I could fill the bodyguard role and he could be the Shawn Michaels role. He is charismatic and can work, he is a really talented guy and I want to nurture that and see it build. He’s 21 years old! You don’t even learn to work until you are 28. The oldtimers always used to say ‘You don’t know how to work until you get hurt’ and until I got hurt I didn’t know why, you have to work because you can’t rely on your athleticism. I think I am like Dracula I need that young blood around me to keep me going and he has been great for me.”

One can’t discuss the X-Division without bringing up X-Division champion Samoa Joe. Add Kevin Nash to the long list of people who are fans of “The Samoan Submission Machine.”

“I would be more than happy to work with Joe, he is really talented. I think that would no longer be a ‘X-Division match’ it would be Samoa Joe vs. Kevin Nash, the X-Division doesn’t really play into that possible match. This match with Sabin correlates with the X-Division because of size. With Joe he weighs maybe 10 pounds less than I do. I am really impressed with him because he has so much talent and is one of the nicest human beings you will ever meet in your life. He will be TNA’s poster boy because he is the type of guy who has a charisma that draws people to him and his work is very good.”

The angle has been compared to Nash’s brief run with Rey Mysterio in WCW during the height of the NWO angle.

“The one with Rey was different in the fact that the NWO was the pack of guys. We started it backwards with Rey, I had just started booking and wanted to make a statement that everybody could beat everybody. Rey is an incredible talent and I don’t think anyone in Sacramento that night he beat me thought it was a farce. With the X-Division it’s a storyline, I am saying they aren’t worthy, they are saying yes they are. I’m taking on the entire division not just one person.”

Nash compares today’s TNA to WCW in 1996, when some of the best smaller wrestlers on the planet were competing in the company.

“A lot of these guys in TNA broke in young and have had a lot of ring time. Many of them work the independents against each other, it is like when WWE ran 20 times a month, in the course of a month you can wrestle someone 20 times and pick the best parts to put on TV. The TNA roster knows each other so well because they have worked each other a lot. It reminds me of the cruiserweight division in ’96 when we had guys like Dean Malenko, Ultimo Dragon, Chris Benoit, Rey Mysterio, Juventud Guerrera, and Chris Benoit. We had some of the best hands in the world. TNA of today reminds me of that era.”

Some of Nash’s greatest matches have been against men much smaller then him such as Bret Hart and Shawn Michaels. Nash pointed out that the small man vs. big man match works better then putting two behemoths in the ring.

Nash also took time to comment on both his involvement in the rebirth of the NWO in WWE and the current resurrection of Degeneration X.

“The only reason that angle didn’t work was the fact that we came in and then immediately pulled Hulk [Hogan] out of the mix. Ratings and ticket sales went up when the NWO debuted. The original plan for Wrestlemania 18 was for Scott [Hall] to beat Steve [Austin] and us to screw The Rock, and instead Steve beat Scott and Hulk turned babyface. If they do DX with the same creative genius they redid the NWO I am sure it will fail. I think it will be interesting because Shawn is a very devout Christian and if you look at what DX did it was pretty risqué stuff that was very sexual. I don’t see Shawn doing that again so from my standpoint I am interested in seeing how they are going to pull this off storyline-wise with Shawn’s convictions.”

The same can be said of the new ECW. Nash has never been one to hold back his opinions, and makes valid points.

“It has already got such a WWE flavor to it that it’s not ECW. It is too diluted and being in a Smackdown arena will have the slick overproduced feel of the WWE. When I used to watch ECW on the Sunshine network it was always smaller venues, including the pay per views, and it was a very male-driven program. As one of the boys I wish it success, as it is another place for the guys to work. If they let Paul Heyman creatively do the show it will be successful. If everyone else gets in and mucks it up it won’t work.”

Nash missed last year’s Bound for Glory pay per view due to health reasons, but says he is 100% ready to return to the ring and explained why he continues to do so.

“I am fine. I went in and got it checked out. A lot of it was that I wasn’t sure that I was healthy. My father died very young of a heart problem (when Nash was three). I was having chest pain that night and went to get it checked out. I am okay. You miss performing. It is one thing to go and spend three months on a movie set. It’s not the same creatively because it is stop-go. Wrestling has such a different feel because it’s a continuous run of trying to create something entertaining. You miss that release when you don’t have it.”

Nash is truly a veteran in TNA. At 46 years of age, his career is starting to wind down and he hopes to pass on advice and teach up and comers. When asked if he would consider taking a creative role in TNA, Nash stated that he would only do so on a committee because he feels you can’t have just one vision creatively in today’s business. In the meantime he contributes by taking the time to work with the current and future stars of the business.

“To be the veteran, my job is to try and give insight — the younger generation still needs to learn to work smarter not harder. There is a way of doing things without killing yourself that results in the same bottom line. A lot of these guys work not only the four times a month TNA does but also 12 or more indy dates. I worry because the style has gotten so crazy a lot of these guys won’t see 30. It’s a shame because there is no reason why these guys can’t wrestle into their mid-30s and retire when they want to instead they have to. So it is important to show them there are different styles and a time and place to use high spots. Hopefully it can extend some of their careers — if I can stop one guy from getting hurt I’ve accomplished a lot.”

Jason Clevett is from Calgary. Standing 6’8″, the 7′ Kevin Nash is one of the few wrestlers Jason would literally have to look up to.