I tried, I really really tried to find something good about the new WWE DVD release Divas Do New York, but alas, there is nothing noteworthy to speak of here.

Since the last time I reviewed one of these swimsuit calendar-esque compilations, that being Viva Las Divas, I have done my best to approach these skin shows from a more enthusiastic perspective. I mean after all, someone must be buying these photoshoot documentaries. 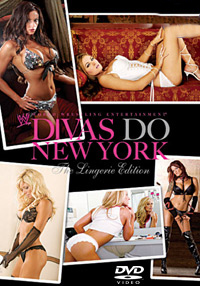 The result, however, remains the same. Divas Do New York really did not impress me, and, believe it or not, made me long for Viva Las Divas.

Why is this you ask? Well, as you will recall from Viva Las Divas, there were some interesting moments, mainly from comedy spots and pranks by Trish Stratus and a couple actually solid matches that were included in the extras. The Divas themselves were also more entertaining.

Here, however, we get less insight into the Divas and their stories are not as discussed as they were in their voiceover work. Yes, Sharmell, Mickie James and other newcomers talk about their road to the Fed, but only they discuss their histories. Why Lita, Trish and Stacy Keibler and others couldn’t do the same is beyond me.

If there is anything that is at all appealing about these segments, it is that for the first time in recent memory (and possibly ever), there is footage shown from Ohio Valley Wrestling in a WWE Home Video. This will likely happen more often now, thanks to WWE’s aquisition of the developmental territory’s library.

As bad as the segments are, the extras are worse. For some reason, WWE saw fit to include the 2005 Diva Search segments, which really did not need to be seen again. The matches, though plentiful, are certainly not up the the standards of last year’s Lita/Trish battle. This, more than anything, is a good indicator of just how bad women’s wrestling has become in the Fed, and how much fans like myself hope that Beth Phoenix, Jillian Hall (who was not included on the DVD for some odd reason) and other up-and-comers will show just how strong women can be in the ring.

Ultimately, I cannot, in good conscience, recommend Divas Do New York to anyone. If you are really interested in seeing the women of WWE in something other than their wrestling gear, just tune into Raw and Smackdown, because it’s inevitable that a bikini/lingerie pillow fight with gravy boats and jello will be popping up sooner rather than later.