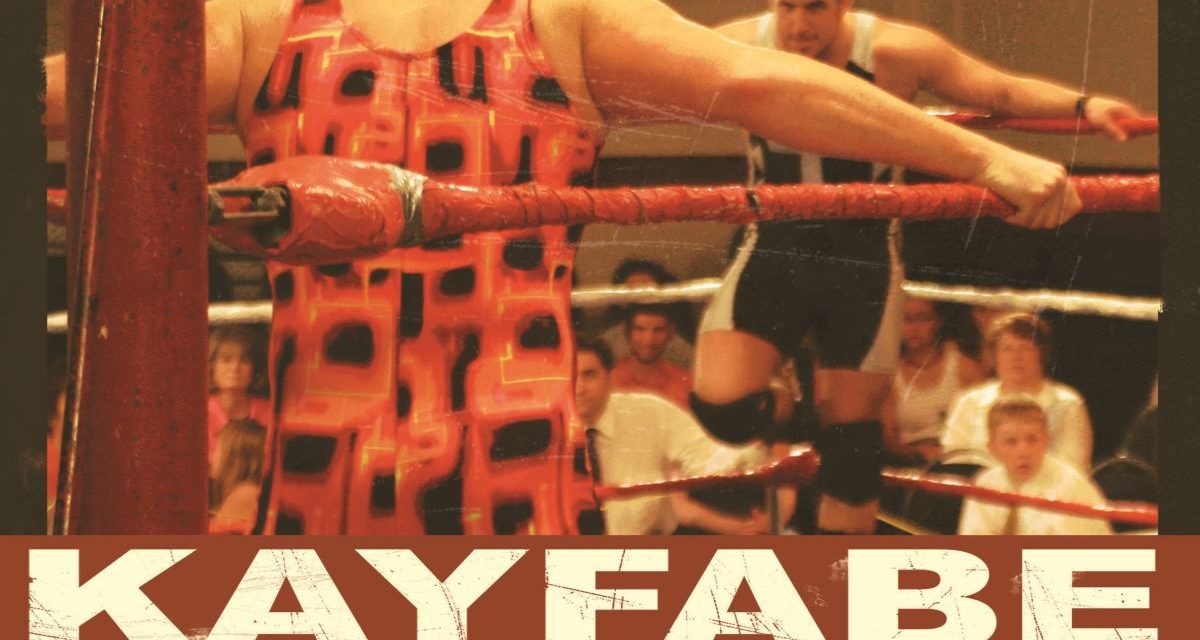 Ever since Darren Aronofsky’s Golden Globe winning The Wrestler, production companies have been rushing to capitalize upon new fiction film and TV projects focusing upon the world of professional wrestling. Some may aim to simply ride off its coat-tails and produce hard-hitting dramas about it, but whether they can achieve the status of Aronofsky’s instant classic remains to be seen.

Producers should look no further than a mockumentary about the world of professional wrestling that is a completely unique take on this choreographed sport — and was filmed and released before Aronofsky’s flick. Kayfabe, written and directed by Pete Smith, Michael Raven, and Michael Scully, seems to begin as a typical, yet-another-documentary-on-wrestling, and ends as a film that stays with the viewer for a while because of its low-key wit and cinematic style that shatters its generic form. Focusing upon a fictional indy wrestling company called the TCICWF, we see the trials and tribulations of its less than famous performers who are wrestling their last matches, thanks to an impending bankruptcy. Eerily prescient of the current economic recession, the film will resonate with anyone whose companies or businesses are in the same state.

Rather than hit its viewers over the head with a sledgehammer about the pros or cons of wrestling, the beauty of the film is in its understatement. For example, the owner of the wrestling company, Al Thompson (played with comedy precision by Travis Watters, portraying a cross between Tony Condello and Al Tomko), faces the end of his wrestling company dream, and simply walks out. Where other films might have shown him crying in his beer and with long dramatic sequences, the filmmakers realize the simple power of having him just disappear. Both the wrestlers and the documentary viewers want him back. 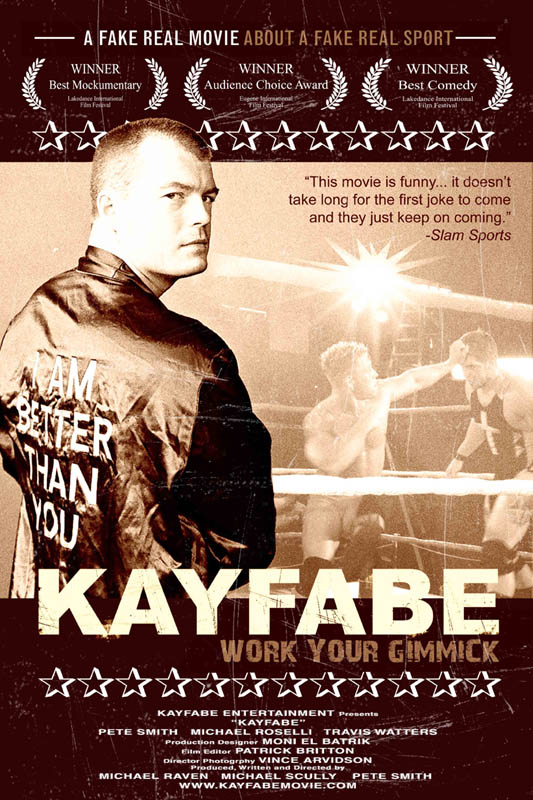 By far, the strongest performance in the film is that of Pete Smith, who plays “Rocket” Randy Tyler, the heavyweight champion of this fledgling promotion. Smith shows a strong gift for acting, and if one did not know he was a wrestler, one would assume he was a gifted comedy actor. If he hasn’t already done so, he should get himself an agent to try out for roles in Hollywood. His role doesn’t seem acted at all, and brings the film close to as real a documentary as it can possibly achieve.

This mockumentary is very sophisticated for a variety of reasons. First of all, it brilliantly uses a female documentarian to capture the events of the TCICWF wrestling federation. Feminist film theorist Laura Mulvey, who pointed out the bias of the “male gaze” in cinema, may find Kayfabe’s apparent “female gaze” of its male subjects to be of interest. This use of a female filmmaker/narrator comes in handy when she raises the subject of whether professional wrestling is an homoerotic sport. The answers from the wrestlers are hilarious to say the least. Few typical wrestling fans would dare to ask such a question, be it in a real documentary, or in a mockumentary like this. And it is in choices like that which makes Kayfabe an intellectual mockumentary, and not simply one for “fans.”

The genius of the film lies not in its true-to-life representation of the world of wrestling, but in its respectful deconstruction of it. It is less concerned with depicting the secrets of how matches are put together, and more focused on the comedy of what the wrestlers say to each other while in rest-holds, to pass the time. Rather than depict insane cage matches, it allows the audience to see the insanely funny situations that arise when these wrestlers have to put on show in a religious school run by anti-wrestling priests.

From a technical standpoint, Kayfabe has the look of a high-quality HBO film, and much of the credit should go to its professional production team: cinematographer Vince Arvidson’s framing of the scenes, both backstage and in the ring, gives the film a look of verisimilitude. If one wasn’t alerted on the DVD box that this was a mockumentary, one might be fooled into thinking that much of the film was a real documentary. The production design and art design of the film is also at Hollywood level standards: both were supervised by Moni El Batrik, who should be commended for her stellar work in these roles, and if this wasn’t enough of a Herculean task for one person, she was also an actress in the film and responsible for the props. 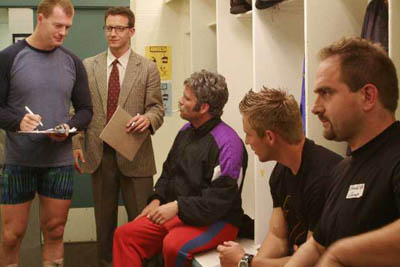 The crew, including “Rocket” Randy Tyler (Pete Smith, standing, left), and Al Thompson (Travis Watters, seated with cigarette) in the locker room before the last show.

If there is one aspect of Kayfabe that could be improved, it is a minor one: the length of some of the matches staged. While the performers are no doubt talented athletes, the film’s uniqueness lies not in depicting longer matches and the various tools used in a hardcore match, but more about the human comedy that arises from the matches. Other than that, the film is flawless.

Kayfabe is too good an idea to stop with one film: the writers/directors should submit it to television studios as a pilot for a future comedy show. It can only help that one of the tag-teams shown in the film is named “Arrested Development”; in many ways, Kayfabe is wrestling meets Arrested Development, the acclaimed TV series shot in a documentary style, but with a comedic power that is rare to find on television. Kayfabe is not some mindless comedy like Ready to Rumble nor a slapstick farce like Nacho Libre. 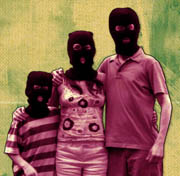 A more appropriate venue for it would be the cutting edge programming seen on Cartoon Network’s “Adult Swim” late night programming. The film itself could be cut into short 15-minute episodes, and be instantly network-ready for Adult Swim. Forget the comparisons to mainstream drivel like NBC’s The Office or its overhyped 30 Rock — Kayfabe is as brilliant and in-your-face as John Glaser’s live-action mockumentary about a family in the witness-protection program on Adult Swim called Delocated!

While many wonder where the future of wrestling programming lies, amidst declining ratings and the lack of late-’90s level stars, perhaps the future lies in satires like this, respectful of the wrestling business, but moving away from matches and storylines, and more fully into the backstage realism of putting such a show together. Old-school wrestling proponents who revile “Hollywood writers” should take solace in the fact that Kayfabe co-director Pete Smith is a writer AND a wrestler. If the freshness of Kayfabe is any indication, it seems that the plenary removal of wrestling family dynasties and their unquestioning writers from the creative picture of the major wrestling TV shows might be the first step to putting wrestling back on the right track.