Often the measure of a great wrestler isn’t what the fans see, it’s what his peers see. In Roger Kirby, who is being honoured next week by the Cauliflower Alley Club, fellow wrestlers saw one of the greatest performers to ever work in the squared circle.

Danny Hodge said that Kirby was a “first-class” hand; Ed Wiskoski called him a “hell of a worker.” 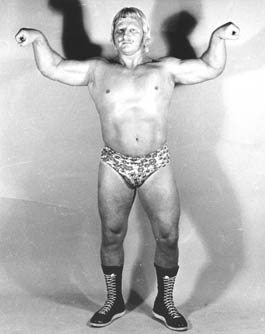 Bill Howard is willing to go even further. “Roger was the best there ever was. Roger could work. Roger could do everything that they’re doing today, and probably even better,” Howard said. “He had impeccable timing, his punches, his kicks, everything look good, perfect. He had the body, the looks, the arrogance. He should have made more money than he did, he really should have.”

Kirby himself thinks part of the reason that he is still so well remembered is that he left the business when he was still a good draw and a good worker.

“I’d done everything that I wanted to do,” he said. “I didn’t want to go back down the ladder.”

Though he worked a few shots in 1986 for the WWF, including refereeing in Kansas City, he was done.

Kirby then put in almost 21 years at the Kansas City Star newspaper, where he started driving a truck and later worked as a carpenter. The benefits that came with a stable job came in handy, as he has had both knees replaced — at the same time — his shoulders, and both hips. (The hip operations oddly made him taller, since he no longer walked bowlegged.)

All told, it was quite the ride for Willis Kirby of Dunkirk, Indiana, who was born December 14, 1939. Having graduated from high school, he worked in a glass factory, and learned to wrestle on a part-time basis from 1960-64.

He’d already had quite the introduction to the sport.

A Golden Gloves boxer who was “about halfway tough,” Kirby attended a wrestling show at his high school. The heel team of Roy Shire and Ray Stevens (working as Ray Shire) were getting the best of Bobby Managoff and his partner. Managoff was being choked. “All my friends are there. All I could hear was ‘Kirby, Kirby, Kirby.’ There’s the adrenaline rush. I’m up on the apron, and almost pulled Bobby Managoff’s head off with the tag rope, because I ended up with the tag rope. Roy Shire kicked me upside the head, and when I hit the floor, it almost tore my ear off.” At home that night, his mother revealed that his cousin’s husband was actually a minor pro wrestler named “Cowboy” Dennis Hall. (Another cousin was wrestler Les Thatcher.) Kirby was at Hall’s doorstep that Sunday, and was soon wrestling as “Wild” Bill Baker. Four years later, he was working full-time.

It was Dick the Bruiser and The Sheik that taught Kirby the ropes in Indianapolis. “Me having a halfway good body, and being a good athlete, they both fell in love me, and just requested my presence everywhere to do jobs for them,” he said.

The Bruiser was more than a teacher and mentor; he was a genuine friend who cared for him, said Kirby. There was a bar/nightclub in Indianapolis called The Harem that Bruiser had a piece of. “I was around there quite a bit, and at his house, because his mom was in the National Democratic Committee, so I was out there for all the political stuff. He’d have parties for the race car drivers and I’d be the busboy on the tables, help tend bar. He used me for everything. Then there was one point in time when I’d gotten hurt. Dick came by my place in Indianapolis once a week — and come by and make sure I had money. It was a good relationship.”

Stretching to make 5-foot-10, and having to jiggle the scale to crack 230 pounds, it was a constant battle to be noticed. “For as small as he was, he didn’t back down from anybody,” recalled Kansas City announcer Bill Kersten. “If he went to a bar and somebody challenged him, he’d accept it.” After explaining that nobody’s that big when they are lying on the mat, Kirby summed up his demeanor: “I was very aggressive because I was small, and I stayed in shape so I could be aggressive.”

In 1967, while working for Gust Karras in Missouri, he became Roger “Nature Boy” Kirby because of his resemblance to Buddy Rogers. In Oregon he was Rip Kirby. The other nickname he had, “Bottom Rope” Kirby, stemmed from his regular routine where he’d get his foot on the ropes just as the count was hitting three. It would look like he’d been beaten, but the referee would acknowledge the foot on the ropes, and the match would continue. Sometimes, he’d pull off the same move three or four times in a single bout, infuriating the fans.

Aside from his skills in the ring and his talent for angering the crowds, Kirby is often cited for his spectacular handlebar mustache. He doesn’t remember how it started, but it was somewhere between North Carolina and Kansas City; “I have no idea what I created,” he said. (For one, “Outlaw” Ron Bass credits Kirby’s ‘stache for his own: “He’s the one that inspired me to do my handlebar mustache.”) That stylish mustache was under his nose for a decade, and he’s had a beard since 1977 when he was working in Minneapolis.

Over the course of his career, Kirby worked against every world champion from Pat O’Connor on up. He hit tons of territories: Georgia, Florida, West Coast, Oregon, Puerto Rico, Minnesota, Kansas City — which was his home for the last 10 years of his career, as well as Japan six times, a tour of Africa, time in Mexico, and a stint living and wrestling in the Caribbean.

But the crowning achievement of his career was his run as NWA Junior Heavyweight champion. And it came about by accident.

It was 1971, and Kirby had broken a couple of ribs and went to Louisiana to recover, which is where his wife at the time was from. On a whim, he went to the matches and the promoter Bill Watts — who had only heard of him, never met him — offered him the chance to beat Danny Hodge (who was heading for a tour of Japan) and become world junior champ.

He beat Hodge on May 20th in New Orleans, and held the belt until September 10th, when he lost to Ramon Torres.

Hodge and Kirby have a lot of respect for each other.

To the “Nature Boy,” Hodge was “the toughest son of a bitch I ever wrestled.”

“Hodge was sort of a cool guy, but he just read too much of his publicity,” Kirby continued. “But the scary part of it was that he was everything his publicity said he was. He was unbelievably good as a wrestler. Unbelievable grip. He would grab you by the wrist and you belonged to him.”

Hodge said that Kirby was “a super champion,” but that his real skill was in making others made. “He even got to me, just the walking, strutting, the showmanship was great,” said the pride of Oklahoma. “Here’s a young man out there before the public doing his thing. It was just like Danny McShain. Every time he walked or strutted, I wanted to hit him. But the people, the fans, they loved it. I guess if I could have strutted, I would have done it too.”

Kirby now lives in the Kansas City suburb of Grand View, Mo., and enjoys photography, motorized vehicles and exotic fish. He is close to his family, with seven children from a couple of marriages, and a whack of grandkids.

All of Kirby’s accomplishments will be celebrated at the annual Cauliflower Alley Club reunion, April 19-21 in Las Vegas, at the Gold Coast Hotel & Casino.

No doubt, there will be a little strutting and bragging during his acceptance speech.